Random Observations Around the Big 12

Share All sharing options for: Random Observations Around the Big 12

As conference plays gets closer, it's always good to keep an eye on things around the conference.  The Big 12 is looking like a solid conference with five or six teams that have a shot at beating anyone on the schedule.  The top end has taken a bit of a hit with Kansas State losing to Florida, Texas being erratic, Baylor looking lost against Gonzaga, and Kansas not finding that top gear consistently.  Trying to predict the end result now though is really tough with the unbalanced schedules which should end up giving Baylor a little bit of help in the chase for the conference championship.  The bottom of the conference is being protected by Texas Tech and Oklahoma up to this point.  Oklahoma was expected to be terrible.  Texas Tech is a little bit of a surprise, they were returning a lot from last year and expected to be towards the middle of the pack and fighting for a spot in the NCAA tournament.

Anyway, lets go through some numbers and see how each team has fared up to this point.  We're going to be using a combination of KenPom's numbers and numbers from Statsheet.  The rankings used here will be from Pomeroy's site.  And remember, a lot of the team numbers will still be inflated a bit due to scheduling cupcakes early in the season.

Kenpom currently has the Jayhawks ranked 2nd in the nation behind Duke.  Best wins are against Arizona (18), Memphis (36), and UCLA (57).  Even though we're undefeated here, the close games against UCLA and USC at home have me a little nervous heading into conference play.  Josh Selby using 30% of his possessions and Marcus Morris using only 20% of his possessions on Saturday also has me worried.  That's not a balance that I want to see as the season moves along.

A few observations about the rest of the conference below the jump and the graphing tool for your enjoyment.

Rick Barnes brought in a lot of talent again but seeing whether he can coach it is always the fun part of watching Texas basketball.  Right now, it seems like they're pretty good when they decide to play defense and very beatable when they don't feel like it.  Their defensive PPP for the season are as up and down as it gets.  When they're turning over the opponents, they're very good.  When they're not getting turnovers, they're allowing a lot of points. 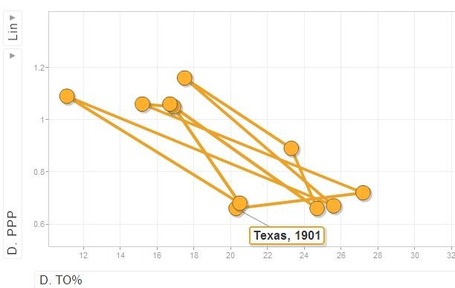 Kenpom ranks the Buffaloes #72.  A somewhat trendy pick as a surprise team in the Big 12 this year.  I don't think anyone expected them to be in the hunt for the championship but fighting for the top half was a possibility.  They started off slowly but seem to have rebounded in their last 5 games.  Time will tell if that's because they figured something out or just taking advantage of patsies on the schedule.  Either way, their offense has definitely come around.  Check out the PPP compared to Kansas and the conference average this year.

KenPom rank 28.  Hmm, somebody didn't buy into all the preseason hype.  The Wildcats have some issues with their team.  Pullen's not living up to the expectations but that's not entirely on him.  Losing Clemente seems to be hurting a lot more than many people expected but their post players have also shown very little improvement from last year to this year.  Wally Judge is out and dealing with personal issues.  Curtis Kelly disappears way too often.  Jamar Samuels has an offensive rating of 95.9 on the season.  Unless those three guys put it together, they're going to be very vulnerable all season.  Interestingly, K-State's three best offensive games came when they had their lowest FT rate on the season.  Overall, they're just struggling to score.

And of course, for you to play around with is the graph tool below.  Remember, you can change the y axis, x axis, color of the points, size of the points, and switch to other graphs in the top right corner.  I've spent quite a bit of time just playing around with it.  If you find something meaningful, screen capture it and share!