As the title reminds us, the box score might look quite a bit different for the next 25(ish) games of the season.  This update was almost skipped because we've been over the Colorado State game in many different ways and wasn't sure if there was anything else to cover.  Big picture though and this might give a benchmark of sorts to compare against the team as Josh Selby works his way into the rotation and flow of the college game.  He's clearly going to make a dent in one or two players minutes and in possessions used.  The game is still only 40 minutes long and the Jayhawks just aren't going to fit in 15 extra possessions for him to use.

So onto the numbers we've got!  Just a quick refresher, positive things in the box score are a +1 and negatives are a -1.

Some good and bad here.

After the jump, a quick look at what minutes might be available, how playing time might be impacting results, and the game by game chart.

First up, what minutes are available? 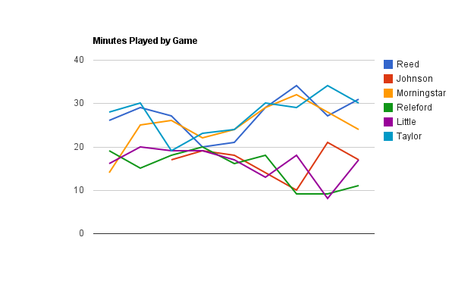 As the competition has gotten a little more challenging, Bill Self has made some slight adjustments to his rotations.  It actually surprised me to see this clear of a separation between Taylor, Reed, Morningstar and Johnson, Little, and Releford.  If anyone wants to place bets on who is going to lose minutes starting on Saturday, I got Reed.  Takers?

*This was written Thursday morning before the news of Mario Little's Wednesday night got out, so there's an automatic 12-15 minutes available for someone.  However, Little was getting a good share of his minutes at the 4.  Who takes those minutes might be a better question than who loses minutes to Selby.  Withey is likely to grab some more time and Releford might even get some time at the 4 against smaller lineups. 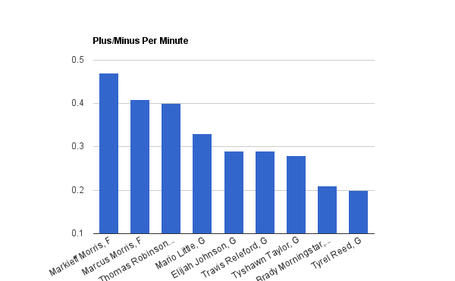 Two things jump out at me: 1) As we've all noticed, the plus/minus favors the bigs a little bit and 2) I like where EJ, Releford, and T2 are at here.  Reed and Morningstar have some room to improve and maybe cutting their minutes back just a little bit will do that.  Outside of those, EJ's production looks really good when broken down to a per minute scale.  For our sake, I really hope the transfer talk was just that.  He's a guy that I think could have an outstanding career and be a "come out of nowhere" guy next season.