The first one of these seemed to go over pretty well, so we're back with even more from the Colorado State game.  The first two situations highlight what the Rams were doing on defense.  Kansas trying to force the ball into the paint with a couple of defenders waiting to disrupt the play.  The second one turns into a very good play for the Rams.  Anyway, onto the clips.

First up, a look at the high/low offense with Mario Little and Markieff Morris from the first half. 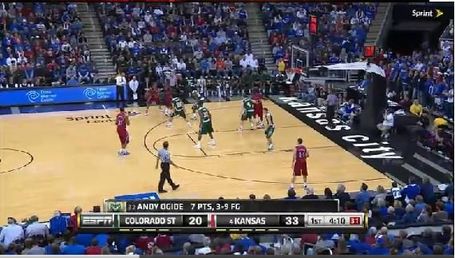 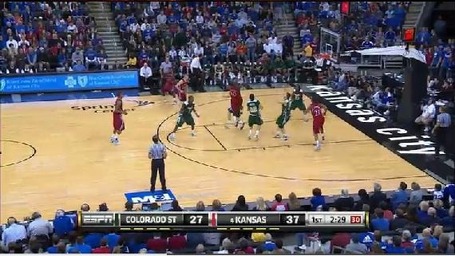 And we're going to finish with a familiar play...

*resolution sucks on this possession...sorry

Bill Self called for this play on the very next possession and they ran it to the other side.  However, one of the post players got called for a moving screen and we couldn't see a result.

Was hoping to have some clips of the 3 guard weave that led to EJ's three pointer in the 2nd half.  The stream was choppy and I couldn't get decent video quality on it, so this is what we have for this week.