Didn't get the plus/minus updated last week due to the holiday, so we're throwing those games into a chart with the Vegas games.  This should be fine as A) I'm not sure there's anything we're really going to learn from the stats in those games and B) you're still getting the totals just in case anything stands out.  Going back to point A, there's not a whole lot to tell about any one game other than somebody filled up the stat sheet without looking at a combination of numbers, it's tough to determine whether it was fluky result or a result that we should be able to expect.  Markieff's game from Saturday could be exhibit A in reminding us that basketball can be a crazy game.

As for the Kansas players, Brady Morningstar's been and going to be a bit of a lightning rod for the fans.  There are fans who see him do very little that shows up in a box score on most nights.  He's not going to be the leading scorer and put simply, he's just not going to be on many highlights.  On the other side, fans can easily argue that Morningstar brings a calming presence to the team at times.  He is more of a facilitator, someone who does his best to keep the ball moving on offense and finds the right guys at the right times.  On the defensive end, I think his reputation is stronger than his skill at this point.  Jay Bilas isn't the only one but he praised Brady's defense multiple times on Saturday night.  Does he have good hands and instincts?  Yes.  Is he slower than most Big 12 guards?  Yes.  He survives but I'm not ready to count on him to shut down Jacob Pullen.  There's a reason the Kansas guards switch on all small/small screens.

More player thoughts and the complete Plus/Minus chart from the 'Zona game after the jump.

Expanding on the rotation just a bit more, check out Releford, Morningstar, and Reed all side by side. 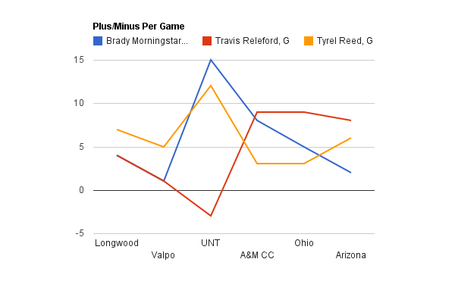 It's nice to have choices.  This graph doesn't make any type of argument as to which player should be in the starting lineup or have more minutes.  Just thought it was interesting and wanted to be able to point out Releford's line.  After going a year with no games, maybe he's getting up to speed these last three games.

As I was throwing this together, I was surprised by Derrick Williams.  After watching him I thought he'd have a +20 on the night.  Looking at the whole picture though and you see 0 assists, 3 turnovers, and 5 fouls.  What I wasn't surprised by was the team totals.  Going back to the game, Fogg on the 3 pt line and Williams wherever were really the only two threats.

Finally, just a simple graphic showing the combined plus/minus for both teams from Saturday.  This shows all you need to know. 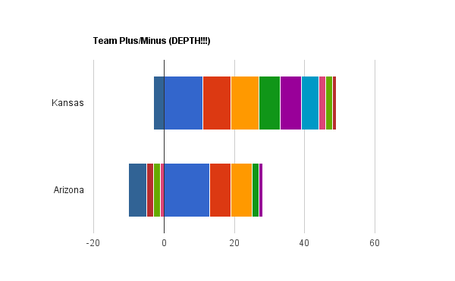