Share All sharing options for: Jayhawks Hold On to Win 87-79

Kansas was tested on both ends of the floor last night and showed some strengths and faults during the process.  In the first ten minutes of the game, it looked like KU was going to turn the game into a laugher.  A 31-15 lead after 9 minutes of play had me thinking this team had no faults.  In the next two and a half minutes, Kyle Fogg hit a couple of 3 pointers and the Jayhawks hadn't scored allowing the lead to be cut to 7.  So in the first 9:13 of the game, KU scored 33 points.  In the remaining 10:47, they scored 11 points due to a combination of poor shooting and a lot of standing around on offense.

In the 2nd half, the game was tight with Arizona leading until around the 8 minute mark.  At this point, something clicked for Kansas.  They became much more active on the offensive end after switching from their high/low offense to a 3 guard weave.  This was out of necessity with Marcus and Markieff Morris on the bench with foul trouble and Arizona playing very good defense inside.  The next 10 points came from layups and a monstrous dunk by Thomas Robinson on a fast break alley oop from Tyshawn Taylor. Overall, it was a solid offensive game and a shaky defensive game that led to a good win over a team that looks like they will definitely be in the discussion in the Pac-10 this year.

Random thoughts about the game after the jump.

Before getting to players, a few things about the team as a whole.

Below is a shot chart that I marked during the game.  See anything good or bad here?  Blacks are made baskets and reds are misses. 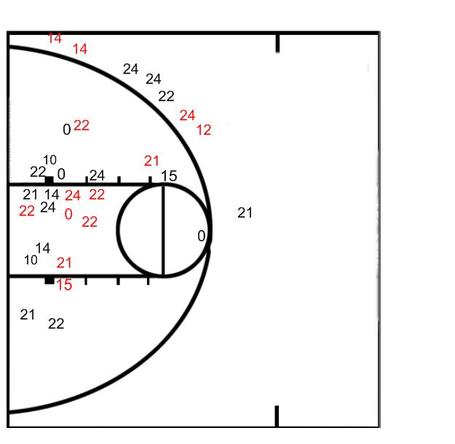 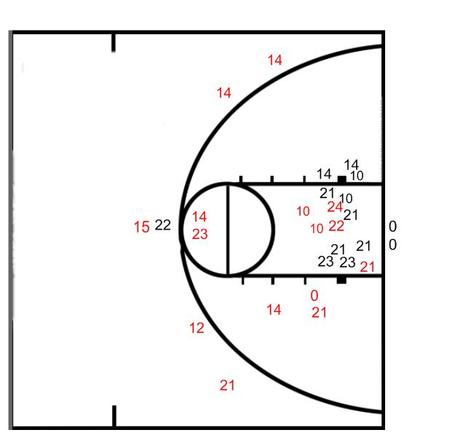