Share All sharing options for: Vegas Baby- Ohio and Arizona

The Jayhawks head to Las Vegas for the weekend to play the Ohio Bobcats and Arizona Wildcats on Friday and Saturday.  We've got a few big picture things to look forward to over this two game set.  First, we'll get to see how the team does outside of Allen Fieldhouse.  The players have played with a ton of energy in every game we've seen, now we get to see if they keep up the same energy and intensity without the best atmosphere in college sports pushing.  Second, we get to see a game against a BCS conference team that returns a lot from a .500 season a year ago and has their eye on the Dance this year.  If the Jayhawks play like they have, there's nothing to worry about.  On the other hand, these are college kids and they are in Vegas, so who knows what could happen.

Ohio is coming off a 22-15 record and finished 9th in the Mid-American Conference.  The Bobcats made a surprising run in their conference tournament and earned an automatic berth to the NCAA Tournament.  The 14th seeded Bobcats kept their hot streak going on the first day of the tournament and knocked off the 3 seeded Georgetown Hoyas but fell in the 2nd round to Tennessee.  Ohio lost a lot from the team that took them to the Big Dance though and the Jayhawks should be able to take care of business fairly easily in game one.  For this season, Ohio is 3-1.  They've beaten Delaware, Texas A&M CC, and Valparaiso while taking a loss to Oakland. 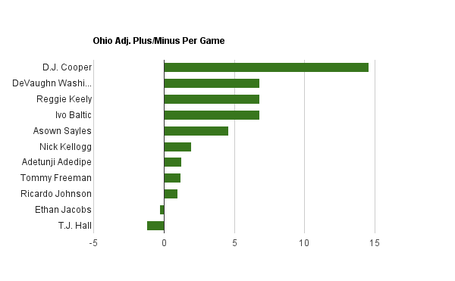 A short stat review and Arizona below

Not sure if looking at the team stats side by side like this gives a good picture or not but figured it was worth a shot.  Anyway, Ohio shoots the ball well as shown in their eFG%.  As a team, they're hitting on 48.5% of their two's and 36.5% behind the 3 point line.  Might be a good test for the 3 pt defense, as KU is only allowing their opponents to make 20.5% for the year.  Turnovers and free throw rate are about average, while they have rebounded on the offensive side very well this season.  One stat that did stand out a little bit was their Assist/Field Goal ratio, they have an assist on 62% of their baskets.  Normally an indication of a team that drives and dishes to a post or kicks the ball out for a 3.  If that's the case, Kansas should be in good shape if the defense we have seen continues.

Kansas has a clear advantage when they have the ball.  Ohio ranks about average in every category except FT rate where they are towards the bottom of D1.  And that's an area that should favor the more athletic team.  The main thing I noticed here is how good Kansas has shot the ball in their first 4 games.  Hopefully that continues outside of Lawrence.

Sophomore point guard D.J. Cooper against Tyshawn Taylor.  Cooper played 87% of the available minutes last year for Ohio as a freshman and had an offensive rating of 106.7.  To put the number of minutes into perspective, Sherron Collins only played 83% of KU's minutes last year.  He's playing a little over 35 minutes per game this year, so he's going to be on the court.  He's not a shooter (5 for 23 behind the 3 pt line and 40% from the field) but is averaging a little over 9 assists a game.  Cooper also averages 3.25 steals per game.  A good game from Taylor here will really raise my hopes for him on the season, too bad Selby couldn't get some action against this guy too.

Arizona finished last season at 16-15 with no post-season play.  The Wildcats ended the second longest consecutive NCAA Tournament appearances streak at 25 last year after a rocky transition from coaching legend Lute Olsen to current coach Sean Miller.  Arizona wasn't mentioned in this post about how transitions don't always go as smoothly as we saw from Roy Williams to Bill Self but they certainly fit.  The Wildcats had four Final Four appearances from 1988 to 2000, so they've been at the top.  The fans are hoping Sean Miller is the right man to get them back. He started off on the right foot by recruiting the 13th ranked class in 2009.  As you can see from the graph below, they return a lot from last year.  Unfortunately, they have had to rebuild and not reload like the Jayhawks. 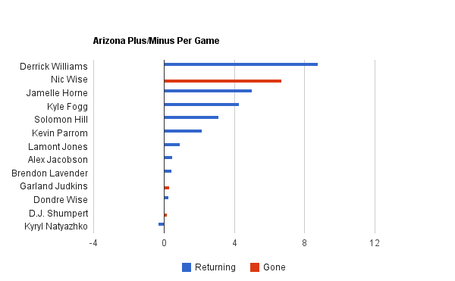 And as you can see from this year's graph, Derrick Williams and Solomon Hill have stepped it quite a bit to start the season.  Looking at their numbers and watching them once, they look better than I expected in early November.  They haven't faced great competition but they've taken care of business.  That always deserves some respect. 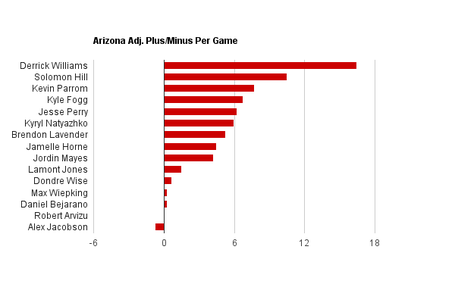 Arizona's currently ranked 15th by Ken Pomeroy, though his rankings should be taken with a grain of salt until early January.   As you can see, they score a lot of points and play at a pace that we're used to seeing.  They've shot about average from behind the 3 pt line (34.8%) but shoot a very, very good percentage on their 2 pointers.  I'd say that has a lot to do with their offensive rebound percentage.  Offensive boards usually lead to great looks, so we need to keep them off the glass on Saturday.  The Wildcats are also getting to the line a ton, lets hope they have a North Texas like result in this game.

Seeing the combined FT rate is already giving me nightmarish flashbacks from the K-State/Duke game on Tuesday.  'Zona's defense has a very similar profile to KU's.  Opponents are shooting 24% on their 3 pointers and only 37.7% on their shots in the arc.  Kansas will have to keep attacking the basket at every chance and force them into fouling, of course the key will be making free throws or that strategy isn't real effective.

Overall, the combination of high offensive efficiency, high defensive rebound percentage, and an average turnover percentage shows a willingness to play it safe on the defensive end and make their opponents work for their baskets.  Patience and ball movement will be a key in the halfcourt sets for Kansas.  Arizona's also a little undersized, so look for the bigs to be the show on Saturday.

Derrick Williams against the Law Firm of Morris, Morris, and Robinson (Little hasn't made partner).  Williams is definitely in the discussion for Pac10 Player of the Year, so whoever matches up with him will get their work in.  He's going to touch the ball a lot and positioning will be key, this could be a good indicator of whether the Morri can keep themselves out of foul trouble against good players this year.

In the end, this game is needed right now.  Kansas has drilled all comers but they've also seriously outmanned all of them.  We're better than Arizona, I don't doubt that at all.  But the first game against legit competition could show some hidden warts or at the least provide a few speed bumps.