Looking at the Mean Green

Share All sharing options for: Looking at the Mean Green

North Texas comes to Lawrence tonight after a surprising win against Texas Tech on Tuesday.  North Texas won the Sun Belt Conference in 2009-10 and earned a spot in the NCAA Tournament.  In the tournament they lost to Kansas State by 20 points, though they did shoot more and make more free throws than KSU in that game, a rare feat.  The Mean Green are strong again and projected to win the Sun Belt according to Basketball Prospectus, though their writer disagrees and picks Western Kentucky.  The Mean Green relied on getting to the line last season.  Their FTA/FGA was an insane 52.1, best in the nation.  They also did a pretty good job of keeping their opponents from getting to the line, allowing only a 32.7 FTA/FGA rate on defense.  To me, it's pretty impressive when you can get an imbalance like that.  Moving on, the weakness last year was taking care of the basketball.  They had a turnover percentage of 21.1% and only turned their opponents over 18.4%, not a good balance when trying to outscore your opponents.

Anyway, onto this season.  Below is their plus/minus per game adjusted from 82 possessions (tempo according to statsheet) to 69. 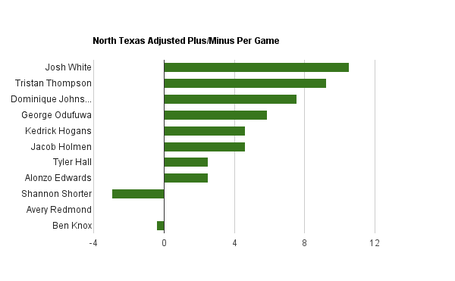 Player Impact and a quick review of the their season after the jump.

As mentioned previously, they beat Texas Tech in overtime on Tuesday and beat Henderson State in their season opener.  In the Tech game, their was a total of 87 possessions (that's including overtime).  They play at an average speed (69.1 possessions per 40 according to KenPom) and attack the basket on offense.  Offensively, they scored only 16% of their points on 3 pointers.  That makes sense because you know they can't get to the line often if they're jacking shots from behind the 3 point line.  In their two games this season, they've shot SEVENTY SIX FREE THROWS.  That's a scary number no matter the competition.  They kept Texas Tech off the offensive glass but I'm not convinced they can do the same against the Jayhawks.

My brain's fried and I can't find the numbers I'm looking for...so you get the player impact chart from their game against Texas Tech.

Does this have the potential to be a challenge?  Yes.  Anytime a team gets to the line like they do and their opponents relies on their bigs for scoring (like us), it could get ugly.  However, they're not a great offensive team, especially if they're not at the line.  They don't force a lot of turnovers and don't shoot a ton of 3's, so Kansas should be able to assert themselves offensively and hopefully force some turnovers to keep them out of their attacking scheme.  84-61.