Random Thoughts and Football Observations from RCT in Lincoln

Share All sharing options for: Random Thoughts and Football Observations from RCT in Lincoln 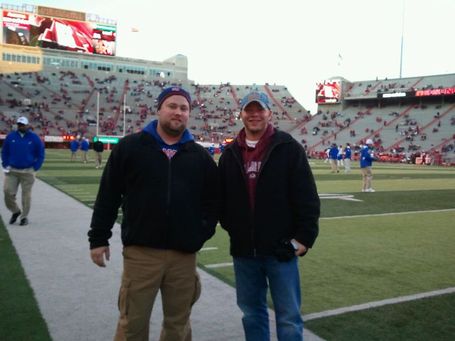 Call it a recap, call it a diary, call it whatever.  What it is, is a collection of my thoughts and observations about Lincoln, Nebraska v Kansas, Turner Gill and a last chance opportunity to watch our Jayhawks in Lincoln.

Wednesday afternoon I found out about an opportunity to go to LIncoln.  Being that I'd never seen a game in the "Sea of Red" it just made sense. Now it may not be a perfect comparison, but just as I would tell people they need to see a game in Allen Fieldhouse, I had heard I should see a game in Lincoln before it's all said an done.  The bucketlist so to speak.

A pair of phone calls to find my traveling compadre and I was in.  Seven and a half hours from Denver to Lincoln and an equal trip back so that I can watch Turner Gill and the Kansas Jayhawks take on the Cornhuskers for the final time as conference opponents.

Note: I have a video from about two feet away of the defensive backs huddling before heading onto the field.  Also one of Turner Gill entering the stadium but I'm having a hard time uploading.  If I figure it out I'll upload ASAP or perhaps a fanshot later. Video was prohibited though so maybe it's Corn karma blocking my technology.

Surely everyone has heard of the legendary Husker hospitality, but haven't you always wondered if it's true?  The Corn are supposed to have some great fans. Nice, polite, football savvy and welcoming.  Turns out, this couldn't be more true.

I went all in, blue Kansas hoodie, red letters.  I figured if they're as nice as everyone says, I've got nothing to lose.

Now things begin to look up from here.  Here's a quick assortment of the things I heard.

"I wish we could both win today."

"We can be friends, we hate Mizzou too." 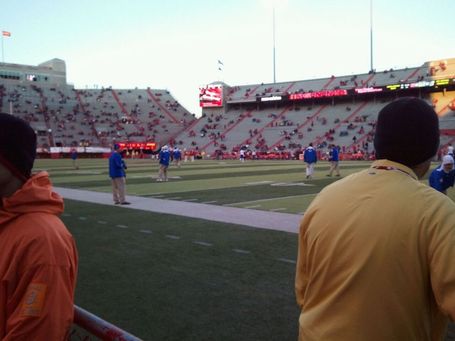 Seats were awesome.  Sat about eight rows above the Kansas band among friendlies. It was like a Noah's arc in the sea of red.  A safe haven even though they are definitely almost too nice a fanbase.

We actually walked in by the field and I thought I'd take a picture at which point I was quickly approached by security.  In my mind I must have missed the "no pictures" sign but it turns out he was just directing me to the entrance onto the field where another member of the event staff would take my picture on the field.  More Husker hospitality?  Maybe they'll let me call the first play too.

Now in being where I was it was actually the endzone where Kansas warmed up and the tunnel where the Jayhawks entered and exited.  From that perspective I just find it interesting how up close and personal the Husker program let's you get with both teams, the field and the overall gameday experience. 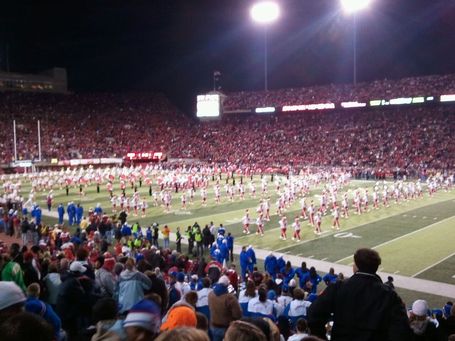 Again, Kansas did about everything they could in this phase.  The areas where the performance could be viewed as poor was largely due to a solid special teams performance from Nebraska.  I can't say enough about the job Alex Henery does.  During pregame introductions he might have gotten the loudest applause outside of Taylor Martinez.

Nothing replaces winning, and this team's morale was in a bad way earlier this season.  But going back to my point about players buying into the message, NDSU set us back early, the early conference blowouts hurt more.  But I think Saturday might give a little credence to the hope that Colorado's comeback may have started a "turning of the corner" so to speak.

When you have a new system and a coach trying a new scheme, gameplan and approach, a lack of results means that your battle becomes a little more difficult. If you're players aren't buying in, things can snowball in a hurry.  It's not that a team or player has quit on a coach, clearly that isn't the case.  It's more a situation where maybe they aren't truly trusting in the responsibility or the scheme being taught.

It feels like maybe that's where the disconnect has been. Some areas we're getting closer, others we still have work to do.  Anyway you slice it, even if the offense stunk, Saturday was what we've all asked for.  Even if you lose, compete.  Up until late we were a couple drives away from another comeback.

We were very conservative on offense and the defense stepped up.  Nebraska kept us at arms length but they didn't embarrass us and if Kansas falls on one more fumble or makes the catch on one more or even both of the dropped interceptions, then maybe things turn out even better.

They really do love this guy in Lincoln.  Tom Osborne got on the jumbotron prior to the game and made an announcement welcoming him back to Lincoln, saying that outside of this game they all wish him the best and are very happy that he's the head coach at Kansas.  Solid round of applause and it was neat to see.

I almost wish the players had been out there to see it too, there might have been some residual benefit if they had.

Nebraska football fans remind me of Kansas basketball fans.  In the right environment and in a big game, I'm sure they go crazy.  In a boring game, where there might be an assumed outcome, it's just ok.  Yes they know football, but if there was a timeout or a lull you can hear a pin drop. It's almost a dutiful cheering style.

If Kansas was pinned in one endzone, that endzone group would stand and get loud, while the rest of the stadium remained seated. Then when the moment where a win is certain it's a mad dash for the car to beat traffic.  Like I said, it probably has something to do with the game at hand, maybe the cold weather, but it reminded me of when Kansas plays a team like Longwood in basketball and the crowd is pretty much bleh.

Pretty fun town.  Found a pretty good spot, drank as much Burning Skye Scottish Ale as I could find and rounded the night out with some solid live music.  Fittingly the band was Billy Bacon and his Porkestra.  If that doesn't sound like Lincoln Nebraska I don't know what does.  Oddly enough, he's from San Diego. 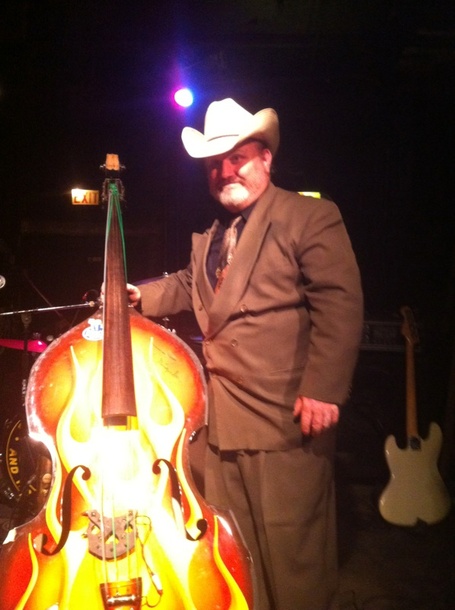