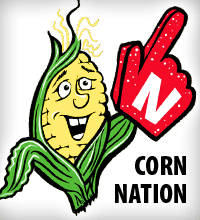 For this week's opposing viewpoints I was joined by Jon Johnston over at Corn Nation and we did it in a little bit of a roundtable setting.

So you'll see what he had to ask of me, and what I asked him.  As you can imagine there was some Turner Gill talk and I think both Nebraska and Kansas fans seem to be on the same page with this one in terms of expectations.

I just found out I might be making the trip to Lincoln myself.  I'm a little afraid of what might be waiting, but it seems like something you should try to do when given the opportunity.

For the majority of Husker fans, Kansas coming to Lincoln means the return of my favorite Husker Turner Gill. Before we get to questions about him, let's focus on our teams - there is a football game to be played.

Kansas seems to be all over the place. You guys lose to North Dakota State, then beat a ranked Georgia Tech team the following week. Last weekend, you're getting killed by Colorado, then score a gob of points in the fourth to pull out a win.

What's the state of the players on this team? Are the starters settled, and who are the guys on both sides of the ball Nebraska fans need to know about?

Right now I'm not sure anyone truly knows the state of the team. I think the transition from Mangino to Gill has been more difficult than expected and the buy-in didn't come along very quickly to start.  The players definitely gravitated toward Gill as a person, but there was a lot of skepticism of Gill as a coach.  I think that skepticism was magnified by the rocky start.

That said, I think the Colorado game showed a bit of the "Believe" mantra finally sinking in.  Up until that point I think the players were hearing what he was saying but not really taking it to heart so to speak. The word is that Gill said something to the affect of "Get ready for a great comeback" during his halftime speech.  My hunch is three weeks ago that would have been heard but not trusted.  I think this week we saw the buy-in and it could act as a potential turning point.  That doesn't mean we go out an upset Nebraska, OSU or Missouri in our last three games, but I think it's something to build on going forward.

Offensively I'd say keep an eye on James Sims.  If Kansas can get him established and the offensive line can give him room to run it helps open things up.  Right now the Kansas offense is conservative, and it needs to be balanced.  Sims is the player that has been able to do that. It's probably no coincidence that the two games everyone talks about (Georgia Tech/Colorado) were his two best games.

Defensively that's a tough call, but I'll say Toben Opurum.  This was our leading rusher a year ago that was moved to LB and now DE.  He's got a long way to go but in the last two weeks his assignment has been very clear and he's accomplished it very effectively.  He's a smart player and he's showing the buy-in that Kansas needs from everyone.  No doubt disciplined ends play a key role in stopping an attack like Nebraska's so I'll say Opurum is the guy to know on defense.

Obviously the story of the Husker season has been the emergence of Taylor Martinez.  He seems absolutely unstoppable at times but was injured a week ago.

How does Kansas slow him down and while I think Nebraska could beat Kansas without him, how far can the Huskers go if he is injured or contained on any given day?

Word is that Martinez should be back for the Kansas game, but Bo Pelini isn't exactly forthcoming on injuries. Assuming Martinez is healthy, the only way to stop him is to spy him, and it might require two players - a defensive end and a safety. That gives the offense an automatic numbers advantage, allowing another player like running back Roy Helu to have a big day.

If Martinez can't play, then backup Zac Lee might be available. Lee isn't the running threat that Martinez is, but Lee can throw a good long ball which will stretch the defense because of the playmaking capabilities of receiver Niles Paul or tight end Kyler Reed.

If neither of them can play, that leaves third stringer Cody Green, who started the Iowa State game because of injuries to both Lee and Martinez. Green did a decent job of managing the offense, although he's struggled throwing the ball deep. A blustery wind in Ames didn't help matters, but he did manage to complete three straight third down plays when Nebraska needed points on a drive in the second half.

Bottom line - Nebraska runs the ball well enough that we can have a quarterback hand the ball off and still score points. Granted, it's not the Tom Osborne days where we could batter opposing defenses, but as long as there's a little pass mixed in, the offense should be okay.

You know I have to ask some Gill questions. Husker fans hope he's successful, especially now that Nebraska is leaving the conference. He's made some rules that don't seem popular, or at least that's how it feels. How do Kansas fans see him?

Truthfully I think we could all care less about the rules he's put in place at this point.  The fact is we have much bigger problems right now than worrying about a recruit wanting to use a cell phone or have a girl over and from what I've heard it's a rule that isn't all that difficult to find a work around for.

Right now what Kansas fans are most concerned with is if this guy is in over his head. By far the one thing that he has looked proficient at is recruiting.  He's done that well and he's done that early.  As far as gameday coaching, demeanor and program organization, that hasn't looked good.

Everyone is hoping it truly is an adjustment period, players getting used to a new staff and a new philosophy, but with as bad as things have looked at times the honeymoon has dwindled faster than normal.

Other fans might point at us and say, "you're Kansas, what were you expecting" but that's a little simplistic. None of us feel like we're an entitled program and that he should come in and win 10 games. The majority probably picked us around the 4 win mark due to turnover and schedule. But what we do expect is a team that goes out and competes.  That hasn't been the case every game.

He'll get some time, because it doesn't make much sense not to give it to him.  But as likable as he is as a person, he's going to have to start showing some progress. I think the Colorado comeback did that just a little.

Let me flip that one around on you and ask if Turner Gill is so well respected in Nebraska why isn't he coaching there?  What do you think the real reason is?  Secondly, how do you anticipate the fans receiving him in Lincoln and do you believe any of the talk regarding a merciful gameplan by Nebraska if things get out of hand to help Gill save face?

Gill needed head coaching experience before he could take over a program like Nebraska - it was a good choice by Tom Osborne to not hire him. Personally, I understand why someone would coach their alma mater, but it's a rare coach that's successful. Better than Gill be successful somewhere else so he can remain a hero to Husker fans.

Gill will be roundly cheered when he arrives in Nebraska, but this whole idea that there will be a merciful gameplan seems pretty far-fetched. There's a tremendous amount of pressure on coaches and they are paid to win games, doubly so at a place like Nebraska. Bo Pelini can't afford to take the game lightly, especially after the close game at Iowa State.

Back to football. What type of offense is Kansas running, and does Gill have the players in place to run the offense or will it take some time to get the right guys?

I think the preference would be to run a pretty balanced offense for the most part.  If it were to skew one way or the other I'd say they'd like to run more than pass and use that to open up the pass a little more.

Right now I don't think the personnel is exactly where it needs to be.  The offensive line hasn't made the adjustment to run blocking as quickly as anyone would like.  Our quarterbacks are probably a little less mobile than he'd like.  And the depth across the board isn't where it needs to be.

It will take some time, but he's made a big first step by recruiting 6 offensive lineman as part of next years class.  Build from the inside out seems to be the theory and I'm happy about that.

On the Nebraska Side how has the team adjusted to the loss of Suh on the defensive side of the ball?  They appear to be very good in some ways but perhaps vulnerable now in others.  If you were gameplanning to attack the blackshirts, what's your philosophy?

Adjusted..... well, the most apparent adjustment is that the defense has dropped in it's performance this season. The Blackshirts are still a top 25 defense, but have struggled against the run where they rank 74th. The defensive line has played okay, but not great. Funny thing, though. Instead of quarterbacks being forced to throw while watching a super mutant freak (Fallout 3!) run at them, they're dropping back and not finding anywhere to throw the ball because everyone is covered. Quarterbacks are no longer tossed like rag dolls, but the result has still been pretty good.

If I wanted to beat Nebraska, I'd run the ball right at them, nothing wide, trying to maintain control of the ball and run as much clock as possible. I'd mix in some play-action passes just to see if I could connect once in a while. The key will be making positive yardage on as many plays as possible.

What's your prediction for the game?

My prediction is that Nebraska will win fairly easily.  Unfortunately Nebraska is a bad matchup for Kansas, especially with Martinez at QB.  If for some reason Martinez is out and Kansas can play well above their norm, maybe they can keep it close.  As much as I hate to doubt my team, I just haven't seen much that would lead me to believe Kansas can keep it close.

I expect the same. I don't see Nebraska taking it easy out of some sense of duty to Turner Gill. If Nebraska turns the ball over, it may be closer than expected.  Oh, hell. 42-17 Nebraska.