Share All sharing options for: Sports Illustrated Talks BCS/Playoff And Why We Continue To Spin Our Wheels 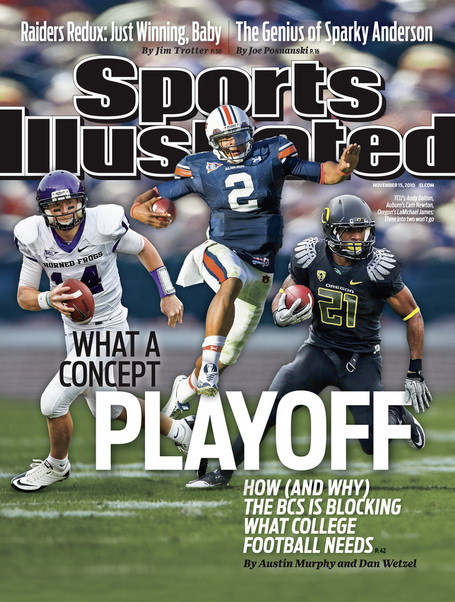 This week Sports Illustrated's cover story revolves around college football, the BCS, who's profiting and why we continue to spin our wheels on the issue.  Yahoo's Dan Wetzel and SI's Austin Murphy collaborate on the piece and in my opinion the more often the question is raised the better.

Warden and I were emailed the article from SI and kicked it around a little.  The article makes some fairly interesting points and it does raise the question of whether or not it even matters if a team like TCU get's a shot.  Fact is, the "BCS buster" is not likely to change anything.  Too many of the powers that be are profiting in a big way, while in all actuality, the schools involved are not.

These are non-profits set up to make huge personal profits for those involved.  The whole deal sounds a lot like something our political figureheads would come up with.  Which makes the fact that many believe the government is the only one that can actually force a change just a little bit ironic.

"Most conferences pool all their bowl payouts, using the bigger-money BCS games to cover the losses incurred in the smaller games. Thus does the Rose Bowl help subsidize the Little Caesars Pizza Bowl-a bowl bailout system that indeed spreads the wealth. Bowl directors privately admit that fewer than half the bowls could survive without the financial support from the schools.

Meanwhile, the sad sack programs that fail to qualify for a bowl often end up in the best financial position. As former Michigan AD Bill Martin said after the 2009 season, ‘The fact we didn't go to a bowl game the last two years means we actually made money.' "

Makes sense.  We all know that Kansas didn't make money on the Tangerine or Fort Worth Bowl and then when we went to the Orange Bowl it wasn't as big of a windfall financially due to actually playing in the game as many would have liked.  Now granted the benefits to the program outside of the actual bowl payout were huge.

Now I work in a not-for-profit company and I know that it's a bit of a fine line and when you cross it isn't exactly clear at times.  But most would consider that a pretty hefty profit.

"Working for bowls is a great gig, if you can get it.... The money is excellent, even for such inconsequential games as the Kraft Fight Hunger Bowl, whose executive director, Gary Cavalli, is unlikely to go hungry, having pocketed $377,475 in 2009. Cavalli, of course, is a bargain compared with Sugar Bowl CEO Paul Hoolahan, who made $607,500 in fiscal 2007."

I've heard CEO salary mentioned recently as a sticking point that could bring things to a head, but after reading this I'm not sure I agree. I guess minus wishing I made 600k a year, I don't have a huge problem with this.  These bowls are generating big dollars and I'd bet these CEO salaries aren't way off base when you look at other similar positions.

Again, not sure what to think about this argument.  The split looks to be about 50/50 between the schools and the bowl.  At first glance that would seem somewhat fair to me, until you start realizing that most of what the schools make is put right back into participating in the bowl.  Here's a quick example of how bowl games should not be profiting off the schools:

"Halftime entertainment at the Jan. 1, 2009, Outback Bowl was provided by the [ Iowa ] Hawkeye Marching Band. And how did the Tampa  Bay Bowl Association, which runs the game, thank the band for that gratis performance? By charging the university $65 a head for each of the 346 band members. According to university records submitted to the NCAA, the school was forced to purchase face-value tickets totaling $22,490 for the band, even though the game wasn't sold out."

and another example from the Orange Bowl:

"For their appearance in the 2009 Orange Bowl, Virginia Tech and the ACC agreed to purchase 17,500 tickets at $125 per seat, but they could sell only 3,342, according to university documents. The result: a $1.77 million bath for the school, not the bowl."

So why do school presidents, AD's etc continue to support and promote the system.  I'd say there is some fairly large incentive from the standpoint of fundraising.  A big residual benefit from partaking in these bowls is in alumni/donor support.

As an Athletic Director a big part of your job is leveraging your product to support the overall program and better that program.  It makes it much easier to get Joe "Big $$" Donor to fork over a hefty check for those facility upgrades when you have these types of events and successes to point to.

But there is also a direct personal gain for most AD's and Coaches who have compensation plans tied to the participation in even the smallest of bowls.

"Coaches land tidy bonuses for even ­minor-bowl glory. ADs, too, reap a windfall for a bowl invite. The going rate: one month's extra salary for an appearance in even the lowliest game. Oregon 's Rob Mullens ­receives $50,000 if the Ducks go bowling. Kentucky 's Mitch Barnhart collects $30,000."

A pair of other quick notes that caught my eye in the article.

All in all it's an interesting article.  From my perspective the playoff is just more compelling and in a year like this where any number of teams #1-#20 could win on any given night it's hard to sit there and watch two teams deemed worthy of the opportunity be the only ones that have a chance.

As a Kansas fan it's interesting to think of that same logic in terms of basketball and realize that Kansas has been a #1 Seed seven times in the last 20 years.  I'd say we might have one a few more titles in there if Roy or Bill had only needed to prepare for and win one game.

For me the politics of it all are interesting, but not really where my expertise lies or why I care.  At the end of the day it's common sense.  It should be a playoff like any other sport, it's too balanced and there's too much parity in the game to have it decided in the manner it is.