A Quick Look at Big 12 Hoops

Share All sharing options for: A Quick Look at Big 12 Hoops

The basketball season is getting closer men, with that lets take a quick look around the Big 12.  Some teams still have eligibility issues (us) and many others are still trying to figure out who will fill in the holes left from graduation or early departure to the NBA (also us).  Using the plus/minus that I tracked last year, I figured each team's returning contributors and their losses from last season's top 10 players.  Hopefully the rosters at ESPN are accurate because going through each team's official site would have been a little too much work.

To review, the plus/minus is a very simplistic way of looking at a basketball box score.  Each player is credited or docked depending on what they contributed.  A player will get a +1 for each point, rebound, assist, steal, and block.  A player is docked a point for each field goal attempt, free throw miss, turnover, and foul.  This isn't anything new or fancy but it does give me an easy way to calculate it and the scoring system fits what I want to see in a team.  If anyone has some ideas, share them in the comments and I'll be happy to listen or justify why I'm doing something a certain way.

Below you'll find the graph and some other thoughts on some of the things I notice. 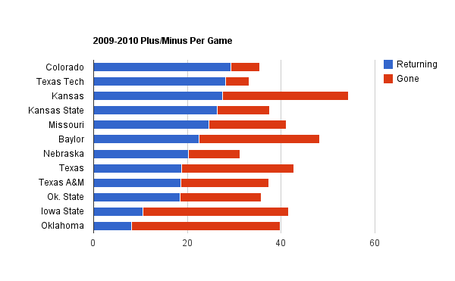 *sorry about image quality...Google Docs changed their publishing options and it's not playing nice with SB Nation at the moment.