Usually on Mondays I fill this space with a stats look back at how we did in the previous weekend's football game. But since we had a bye week I am going to take a statsy look forward at basketball. Now, I know there are people hesitant to look ahead to basketball because we are in the midst of football season, but with no football game this past weekend I am seizing the opportunity to look at the basketball team. Secondly, RC will have a much more in depth preview later and I don't want to step on his toes, but I have a sweet graph and I want to show it off.

I was going to have a similar graph for football, but as I was building it I realized one of my axis (axes? axeses?) didn't make any logical sense. So I had to scrap it. Not good times. The graph and some explanations after the jump: 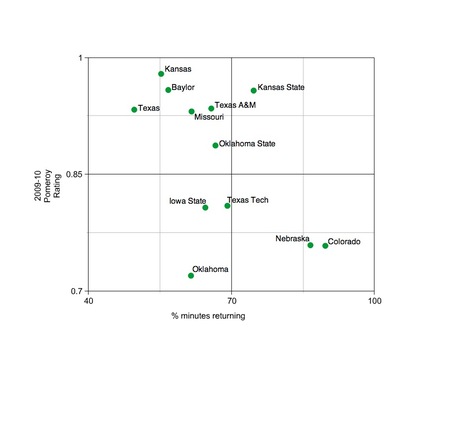 I think you can click that and make it larger, but I am not html savvy so what do I know.

Let's break it down a little further:

Kansas State brings back most of the guys who made them good (except Jacob Pullen of course), making it a little easier to see visually why the coaches picked them in the top spot.

Baylor's dot represents where they sit with LaceDarius Dunn (cue Grad's picture here), but it is looking more and more like we will have to move that dot to the left quite a bit. Dunn's absence could kick Baylor from a final four contender to a fringe top 25 team.

Texas, in losing Damion James, Dexter Pittman and Avery Bradley, obviously lost more than any other team. Still, Big 12 coaches like them quite a bit this year. I don't see it. Whatever the over/under is for shots taken by Jordan Hamilton, take the over.

I hate them obviously, but I like Missouri's ability to be frisky this year. Their 40 minutes of hell style works because I don't think it requires a ton of experience and so even though Missouri doesn't have a lot returning, but I think the players will quickly adapt.

Oddly enough, Nebraska and Colorado return the most players, but they are also the worst two North teams. They also are the two teams leaving the Big 12. Later, suckers (but I will be sad to see Killdeer, North Dakota native and Colorado starter Austin Dufalt leave).

That's about all I have for quick first impressions, but if anyone else has anything have at it in the comments.