Front page bump for Warden today on his snow day.  I like the Warden Plus/Minus myself as it is just a little bit unique to RCT and it's the first efficiency rating I've ever taken the time to follow.  Interesting indeed.  Maybe we need a stat guy around here.  -Denver 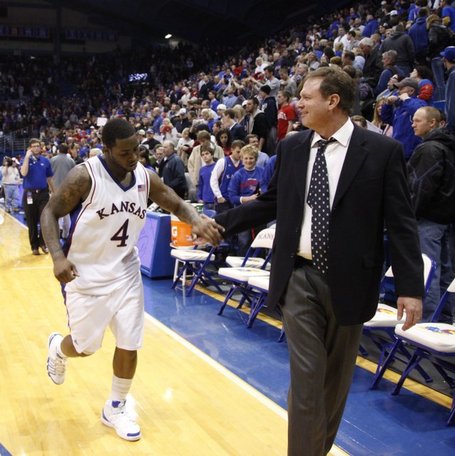 Basically, what happens when I try to combine all the stats and call it "Warden's Plus/Minus".  These numbers aren't that unique and many similar measures are all over the web.  For example, Upon Further Review uses an "Efficiency" rating that = (Pts + Reb + Ast + Blk + Stl - Missed FG – Missed FT – TO).

Warden's Plus/Minus is very similar, the formula I'm using is Pts+Reb+Ast+Blk+Stl-FGA-FTA-TO-FL.  The main difference is that I'm subtracting all shot attempts and fouls.  I'm including fouls because more often than not, fouls hurt the team.  The other difference is subtracting all shot attempts instead of only misses.  An efficient scorer and contributor scores while taking fewer shots and I have a strong personal bias against "gunners".

First off, lets look at the Cornell game.  Sherron led the way with a +10 followed by Aldrich at +8 and Tyrel at +4.  The only other positive scores were from Brady, CJ, and T-Rob all checking in with a +1.  Based on the emotion from the game, Sherron should have blown away all teammates in the plus/minus.  But, Sherron couldn't accumulate any assists because his teammates couldn't buy a basket and Cornell took care of the ball keeping the number of steals down.  Sherron also gets the "gunner" penalty.  Yes, I know he saved us and he needed to be a gunner last night.  Aldrich benefits hugely from points and rebounds, 13 points and 9 rebounds equals a solid night.

Negatives for the game were Xavier and Tyshawn both ending up at -3.  Different paths to the same result, Xavier scores 14 points but it took him 13 shots and 9 free throws to get there.  I wasn't happy last night with Taylor and feel the same today.  Looking at his line though, he didn't kill the team.  He had 3 assists against 1 turnover and was only 0-1 from the field.  He just didn't bring anything positive to the table last night, really would have liked to see CJ some more last night.

How does the team's plus/minus look so far by game?

Look at that, Cornell had the second lowest plus/minus for the season.  The Memphis and UCLA games are still ugly.  Not sure why the Temple number is so low, probably why I shouldn't subtract all field goal and free throw attempts.

And finally, players and their per game plus/minus average.

What do we have?  Cole's a stud.  Even I disagree with Sherron's number.  Brady scores very well on the plus/minus.  He takes care of the ball, plays smart defense, grabs a few boards, and doesn't take a lot of shots.  The real question I have after looking at this is, did I just solve the Morri debate?  Kieffer 5.36 > McMorris 4.43