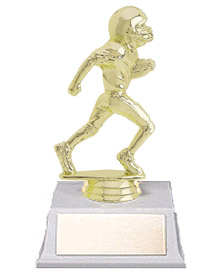 Welcome to the new year, hope everyone had a nice holiday and I assume we're all back at work and can refocus our energy to important things like RCT. Among those important items is of course the 2009 RCT Readers Choice Award for the Kansas Jayhawk football season that was. For those that weren't around last year here's the way this goes.

I'll throw up a post and a poll. If necessary, inside the post will be a breakdown of the nominees and any appropriate information regarding their qualifications. We'll do this in a poll format so both lurkers and those more active readers all have a voice. Feel free to lobby for your selection in the comments. These will be quick, 1 day polls and in the end we will have our "RCT Reader's Choice Awards." Also once again making the appearance is the fantastic pee wee football trophy that is awarded to each winner.

In addition those players awarded this prestigious honor get a priceless prize package. Priceless primarily because it is nonexistent. They do however receive the satisfaction that their efforts were noticed by RCT readers worldwide. As always it's important to remember that it's simply an honor to be nominated and winning would be icing on the cake.

Without further ado let's get things started with the 2009 Offensive MVP Award.