Friday morning - one day closer; just over a day away; it's almost here.

With the build-up to tomorrow's showdown in Manhattan and all of the hype of hosting ESPN's College Gameday, tensions could be at an all-time high once the players finally take the court and the ball is tossed.  It should be just one step below the repeated body slams put on Brett Favre in last Sunday's NFC Championship Game.  Going on the road in conference play is never an easy task.  Especially this year in the Big 12. (Unless, of course, you are Oklahoma State, where going on the road is no problem.)

So, what do the Jayhawks need to do to finish "Rivalry Week" with two wins and no losses?

The Homer in Me 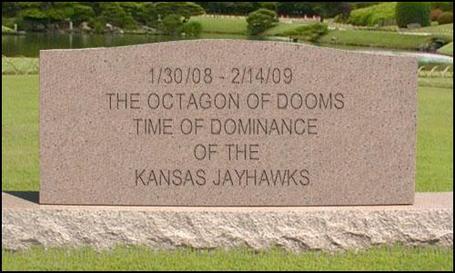 For starters, absorb the initial blow of a frenzied atmosphere and crowd.  Not to sound smug and arrogant, but all crowds get up for Kansas.  It's just a fact of life, Kansas State.  And, you are no different.  It brings out the hate from the darkest depths of your purple souls.  If the Jayhawks can get to the first TV timeout down no more than four or five, nerves should settle and the real game can begin.  There is no doubt what a home court advantage like the one that Kansas State will boast on Saturday can do.  As Kansas fans, we've seen what it can do for you - to the tune of 54 straight.

Stay on Jacob Pullen and Denis Clemente at all times, rather than doubling down to the post.  The fact of the matter is this: the Kansas bigs are as good, and better than, in most matchups on the frontline.  Luis Colon can't physically compete with Cole Aldrich and keep him out of the paint or from getting his hands on any missed shot that he wants.  With the exception of Curtis Kelly, the Jayhawks have the advantage inside in any combination of matchups likely to hit the floor.  That said, the Wildcats do rebound their own misses at the fourth highest rate in the country. (42.4 percent of all misses)  Just, Lord help them if they let Wally Judge onto the court.  Taking perimeter defenders away from shooters is competely unnecessary and will only lead to another barrage of three point baskets against Kansas.  Not a welcome sight - at least not the eight-thousandth time.

Keep Aldrich out of foul trouble and establish a second inside option.  Whether it be Marcus Morris, Markieff Morris or even a breakout game from Thomas Robinson, a relief of pressure and constant double teams on Cole will be a necessity.  It is no coincidence that he has played near to expectations of late as Marcus has played unconsciously well.  Doubling Cole leaves Marcus free to cut inside and gain good position to get a high percentage shot.  Compensating for Marcus means the double down is late getting over and Cole establishes position inside and gets off a quick turnaround or draws a foul.  Not to start down that road, because it is a road I don't like going down, at all, but that is one thing that made the 2008 title team so tough - multiple bigs that made an impact every night.

Now, in lite of yesterday's trend of conversation in my First Thoughts: Kansas State post, I will immediately, yet reluctantly take off my two-bit homer hat and give you a "non-slanted," "unbiased" and "non-misleading stats filled" point of view and give you a true look at the keys to the Jayhawks doing the miraculous on Saturday. 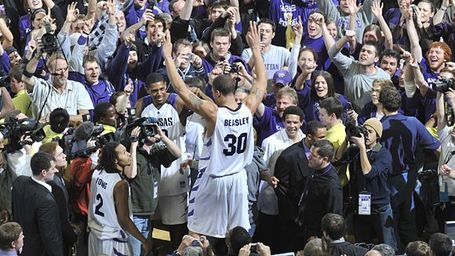 For starters, absorb the initial blow of a frenzied atmosphere and crowd.  The Octagon of Doom is the loudest, toughest arena in the country.  Just see here.  It's compared to Allen Fieldhouse.  Look in the comments at all of the smug and arrogant KU fans automatically assuming they are better.  And, please, would you people quit calling it Bramlage Coliseum?  Everybody knows it's the AWKTAHGAWN UV DUUM (courtesy SlamDunkTheFunk) now.  Nobody wants to play there.  The refs don't even like us.  They're afraid of our booing skills, because they know they're always wrong.  And, you don't want to see what Wally Judge can do.  What a basketball player!!  He's going to be the next Beasley.

Stay on Pullen and Clemente at all times, rather than doubling down to the post.  Pullen and Clemente may be streaky, but they are as dangerous a scoring combo of guards as you will see in the country. (Okay, that was serious.  They really are that good scoring together.)  If Clemente can play well with Kansas coaches and players yelling racist obscenities at him last year, just imagine how good he'll be now that the racists have been outed and won't be able to do it again.  I didn't even mention that Pullen has the best beard in all of sports.  And, the Twins totally copied us by giving out fake Joe Mauer sideburns to fans at a game.

Keep Aldrich out of foul trouble and establish a second inside option.  Aldrich fouls too much.  We will boo.

I'm really starting to dislike K-State fans more and more.  Does it show?