The Kansas Jayhawks have already outplayed and embarrassed one bitter rival this week.  With Saturday evening comes the chance to do the same to our friends from the west this time.  In beating Missouri Monday night, the Jayhawks looked every bit the team that was ranked preseason number one and overwhelmingly picked to make a run to the Final Four.  Head coach Bill Self couldn't have been happier with the way his players played defense.  The Tigers shot a paltry 27.9 percent for the game. (The new streak of opponents held under 50 percent shooting now stands at two, just in case you were wondering.)

The Allen Fieldhouse faithful were at their very best and provided a raucous, hostile environment for the visitors.  However, this time the roles will be reversed when the Jayhawks travel to Manhattan to take on Frank Martin's Kansas State squad.  The Wildcats are coming off of a somewhat unexpected road victory Tuesday night at Baylor. It can be imagined the sort of environment Self's team will encounter Saturday.  As long as they avoid tossed chickens and flying bottles onto the court, the trip to Manhattan has the possible makings of yet another successful business trip on the road.

Everybody remembers the scene just two short years ago, (the year we won the National Championship) when the historic streak of 24 straight victories inside Bramlage Coliseum "The Octagon of Doom" was snapped.  At that time, though, if I do remember correctly, Kansas State had a fairly talented freshman by the name of Michael Bealsey and a talented sidekick in Bill Walker.  Those two won't be around this time when the Jayhawks come calling.  Things might be just a bit tougher for the upstart program, on the verge of true national relevance for the first time in decades.

As obvious as it sounds, avoiding turnovers (unlike Monday night) will be the highest of priorities for Collins and company.  Kansas State forces 17.7 turnovers per game, four higher than the Jayhawks average at 13.1 per.  While only accounting for 4.9 of those turnovers as steals, it would seem that they do more to put their opponents in a position to make a mistake. (i.e. speeding them up offensively)  Also, allowing our bigs to handle their own man in the post and not doubling down with a guard every time the ball goes inside, thus leaving Pullen or Clemente wide open for three would be a solid base plan on defense.  Clemente has been awful shooting of late, but we all know that the cure for that is one game against a sagging Kansas perimeter defense and you're on your way to 30 points a game the rest of the year.  Pullen had a rough two game stretch prior to the Baylor game, (2-15 shooting each game) in which he shot 63 percent and six-of-seven from three.  Getting corrected before facing Kansas could make things even worse (or better - depending on which side of the rivalry you stand) for the Jayhawks.  That is my biggest fear heading into this game.

If Jacob Pullen goes off for 30+ points, the Wildcats will win; if not, they will have trouble.  Honestly, that is the only way that I can see Kansas State winning on Saturday.  As good as there bigs are, Kansas' are still better.  They do, however, have equal depth to that of the Jayhawks.  Each frontline can confortably go five deep, with each team boasting a wing physical enough to play the four if either team desired to go small.  Depth with size is a key for not only Kansas State, but any team that plays them - with as often as fouls are called in their games. (23.6 FPG committed, 26.2 FPG drawn.  Third and first in the nation, respectively.)  Now, I'm not saying that Kansas State is a rough and dirty playing team, but if it walks like a duck and quacks like a duck, chances are it's a duck.  They play a physical style of basketball, both inside and out, and don't let you have anything for free.  You have to earn your rebounds and baskets against them.  Seems very fitting for a Frank Martin-coached team, huh? 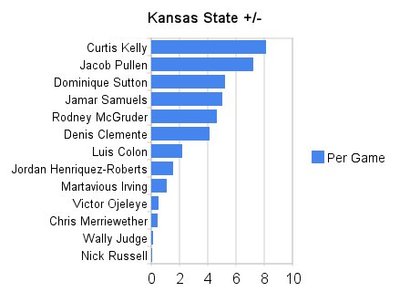 A look at KC's Three Keys to victory tomorrow morning...