This is Rivalry Week (Two Days).  While this is a big game for special reasons (most hated rivalry), it also is the first game of an emotional back to back stretch of rivalry games, concluding with Kansas State just five days later.  Nothing short of the Jayhawks' highest intensity and focus will suffice this week.  Both teams are worthy opponents and could each walk away with victory.  We'll talk much, much more about K-State in the upcoming days, of course, so for now, let's worry about the bad guys from Columbia.  We have great reason to worry, by the way.

As recent as five minutes ago, I didn't know what to make of this year's Missouri basketball team.  I've watched them play as much as I could this year, listened to them discussed on the radio everyday, had discussions with Missouri fan-friends and read Rock M Nation every single day for the last month.  I've yet to figure them out.

This is what I do know for sure: they're not as good as they were last year, but are still very dangerous.  Having lost Demarre Carroll and Leo Lyons would be your main reason why.  Most people can see that.  However, their guard play is even better than last year - returning everybody: Zaire Taylor, Kim English, J.T. Tiller and Marcus Denmon, while adding an instant impact freshman in Michael Dixon.  As far as the inside work goes, there isn't as much depth.

So, how do the two teams compare as far as where the production comes from?

Missouri's backcourt slightly more productive scoring-wise, a lot more aggressive defensively.  As if you probably couldn't have figured that out yourself, even before the numbers were laid out.  Obviously, Missouri's style of play dictates that their guards must outplay the opponents' and make up for a lack of elite frontcourt play.  Tiller was co-Big 12 Defensive Player of the Year last year along with Cole, so look for him to try to lock up Sherron all night and prevent penetration.  It is more than likely that two of the five primary guards will have strong games offensively.  The odds are just in their favor with so many options.  The key will be to frustrate and prevent a third or fourth guard from making a real impact, too.  All but Tiller shoot the three often and well, so I'd prefer to let him do the scoring rather than English or Denmon.

How much of the game can be slowed down and the frontcourt involved will go a long way in determining who wins.  More bodies, more size, more versatility.  That's what the Kansas frontline has in comparison to that of Missouri.  Safford can step out and shoot, but does so wildly at times.  The thing that could help the Jayhawks most early on could be, once again, working the low post early and often and drawing a couple early fouls on either Bowers or Ramsey.  Once you get past those two, there isn't much to prevent Cole or a twin from tearing down the rim every trip down the court.  Kansas obviously has the rebounding advantage, but obviously that only matters when you're missing shots.  So, don't miss often and you're in good shape.

From their Yahoo! team page: 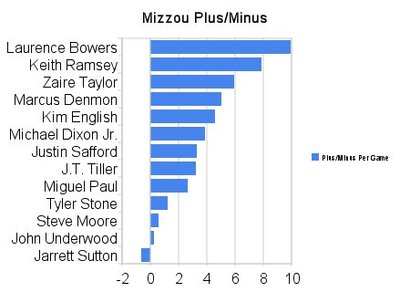