That's the simple, yet fitting name we'll use - whether you like it or not.

Scout.com: McMorris Taking No Prisoners
"Kansas forward Marcus Morris has taken his game to another level in Big 12 play, and people are taking notice. More, inside..."

KU's Xavier Henry excelling on defense | KUsports.com
"Best known for his offense, Xavier Henry was dandy on defense in Kansas University’s 81-75 basketball victory over Baylor on Wednesday night in Allen Fieldhouse. The 6-foot-6 Henry, who plucked seven steals, tied Tony Guy (1979 vs. Kansas State) and Darnell Valentine (1977 vs. Fordham) for most thefts by a Jayhawk freshman in a single game."

"Clutch Collins easy pick for No. 1" by The Keegan Ratings | KUsports.com
Keegan validates my pick for Sherron as Player of the Game against Baylor. Nothing less, nothing more.

Wednesday Night's Rock Chalk Chant (Video) | Kansan.com
0:17 in - girl in the red shirt texting. How in the world do you get front row seats at Allen Freaking Fieldhouse and sit there and text during one of the best parts of the game? Have you no sense of where you are; what you're doing? If you want to go to a social event, organize an evening at the skating rink with your other texting friends. There are thousands of Kansas fans that age that would kill to be standing front row in the student section - let alone inside AFH at all. I hate you, girl in the red shirt. I don't even care if you are halfway good looking. /end rant

Phog Blog " Return of the REAL Standings UT, k-state Teams to Beat in 2010
Interesting breakdown of the contenders for the Big 12 crown this year, using the REAL standings.

Knight, Selby and Lamb move up in the new ESPNU 100 | The Shiver
If you've taken a look at the Hardwood Recruit Tracker on the right sidebar of the site, you'll notice these are three names that coach Self is in deep on, and all guys that we would be very happy to land.

Gridiron Club moving forward, but behind schedule / LJWorld.com
Good to see that this project is still a "go" after rumors that it was scrapped after Mangino-gate.

KUsports.com Message Boards: Working on the scoreboard
A thread on KUSports message board updating the progress of the new scoreboard being put in at Memorial Stadium.

Summary Of All Things Lucca - Clone Chronicles
"The German translations were rough, so I gathered the highlights, along with my thoughts on the whole deal. Let me know what you think." - Mark Kieffer, Clone Chronicles

Texas Tech coach: Lucca Staiger is "selfish" The Des Moines Register
"To get up and leave like that doesn’t show much respect for his coaches, his teammates, the fans, and the university," Pat Knight said. "He’s being selfish, leaving his team."

Royals Reportedly Sign Rick Ankiel - Royals Review
For all my Royals fans here, I have to admit that I am slightly happy with this deal. Now, I'm no sabermetric stathead, but he's certainly better than every Royals outfielder from 2009 sans DeJesus post-May. Let's just hope that he's the everyday rightfielder, not the everyday centerfielder and that either a) Guillen is gone or b) Guillen is the everyday DH.

Los Angeles Lakers vs. Cleveland Cavaliers - Recap - ESPN
LeBron leads way as Cavs take season series from Lakers. So, the obvious question is: who ya got? Kobe or LeBron? Favorite? Better player? Better finisher? Better shoe? Have at it all. This is as good as it gets when it comes to player "rivalry."

Andy Roddick needs four sets to beat Feliciano Lopez, advance at Australian Open - ESPN
Any other tennis fans here besides KUGrad08? Will an American ever win a grand slam again?

The Club of Common Cold: Group C - World Soccer Digest
Since I have control over what goes into the daily links post, this will be what will become your daily World Cup primer. In an effort to convert (or at least interest) more of you non-believers, I'll supply simple, yet informative World Cup links. We begin with the USA's group preview from World Soccer Digest, and SB Nation site with a great writer. Check it out sometime.

Anybody else think we need a Babe of the Day in this space? (first candidate in the Ankiel to Royals post comments section)  Instead, for today, we'll go with this great shot of Xavier after the Baylor game: 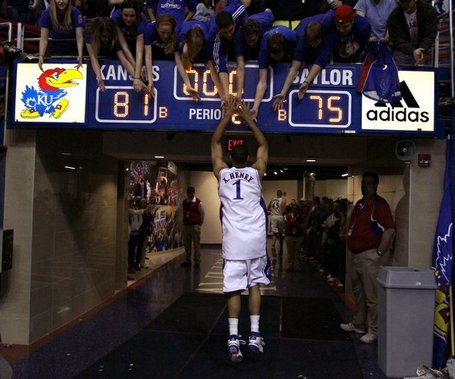 Now, what could be a better picture than that?  Perhaps everyone's favorite Jayhawk, pictured here.  Don't you just love that guy?  Never leave us, please.