Get to Know the Coaching Staff: Robert Wimberly

Share All sharing options for: Get to Know the Coaching Staff: Robert Wimberly 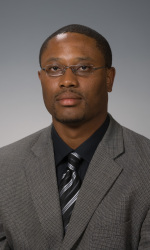 The last and final member of the new Kansas coaching staff is Robert Wimberly.  Wimberly will be taking over a position at Kansas that is fairly loaded in young talent, while at the same time will need to replace one of the best players from a year ago. That spot is safety, the player lost is Darrell Stuckey.

Returning for the Jayhawks on the other hand is a solid crop of young talent.  Lubbock Smith showed tremendous progress during his redshirt freshman season. Chris Harris could still find his way back to safety at some point.  Bradley McDougald played spot minutes and came to Kansas a highly regarded safety prospect.  Throw into the mix redshirt freshman Prinz Kande, perhaps Dexter Linton, Ryan Murphy and even Phillip Strozier all potential contributors.  Now it's a matter of developing and coaching all that youth into a formidable group.

Wimberly has a fairly short resume as he is a young coach graduating in 2002.  Wimberly is from the Miami Florida area and it's an area he has already turned to for recruiting while at Kansas.

Wimberly spend two seasons at Wisconsin following graduation, moving on to  Liberty University for 3 seasons.  While at Liberty Wimberly held the title of Director of High School Relations and Linebackers Coach. Wimberly would then spend a pair of seasons under Coach Turner Gill at Buffalo before taking his most recent post under Gill with Kansas.

As I said there isn't much out there on this one, but he has made some inroads on the recruiting trail early especially in his home state of Florida.  In fact Wimberly is responsible for finding, recruiting and gaining a commitment from 3* wide receiver Brian Maura.  Maura stands 6'3" 190 runs a mid 4.4 forty and returns kicks.  Maura comes from a region that is known to produce the kind of speed Coach Gill is looking for. Wimberly was also responsible for Chad Kolumber out of the Virginia are.

No it's not a hire that's going to have anyone shouting from the mountain top, but Wimberly is young and he provides recruiting connections in Florida, Virginia and other states not typically looked to by Kansas.  Everyone starts somewhere, the hope is that Kansas may have gotten a bit of a sleeper in Wimberly.  Besides, he's getting to learn the recruiting game from some of the best in the business.