Get to Know the Coaching Staff: Vic Shealy

Share All sharing options for: Get to Know the Coaching Staff: Vic Shealy 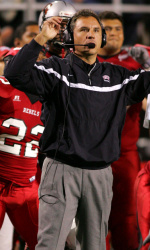 Two more coaches to go in our "Get to Know" series and both will be handling one of the most difficult positions in the Big 12 right now in the secondary.  Currently the Big 12 conference is known across the country as an offense first, pass happy league that has produced some great college quarterbacks and receivers over recent years.

On the other side of the ball there are those tasked with defending this onslaught in the secondary.  Safeties have to be able to move like corners but also hit like linebackers.  The shift to slightly smaller, faster athletes in this department is apparent.  It can be a struggle right now at the corner spot in the Big 12, but for those that are successful there are NFL teams waiting to pay for your services.

Overall the Kansas Jayhawks have somewhat struggled in this department since the departure of Aqib Talib.  The talent is there, but a better coached defense from top to bottom will go a long way in helping players like Lubbock Smith, Anthony Davis, Chris Harris, Prinz Kande, Greg Brown and others look much more the part than Kansas has in years past.  The man tasked with coaching up the corners and getting Kansas back to the days of Charles Gordon and Aqib Talib is Vic Shealy and with that, let's take a look at the resume.

Vic Shealy was born in Nashville Tennessee the son of a football coach in Dal Shealy.  Dal would coach the Richmond Spiders football team from '80 to '88, a school where his son would later spend time.  As far as Vic goes, his college career began as a graduate assistant at Baylor University in 1985.  After graduating in 1986 with his masters degree, Shealy would take a secondary coaching position with Mars Hill College for two seasons before moving up to an offensive coordinator post with Austin Peay.  Two seasons as Peay and it was back to Mars Hill for a year before once again heading to Austin Peay but this time as the secondary coach and defensive coordinator.

While it would appear that Coach Shealy was simply going back and forth between Mars Hill and Austin Peay, trying to determine his favorite, that wasn't the case.  In 1995 Shealy would take over NAIA Asuza Pacific.

In his first year, he lead the team to a 4-4-1 record, followed by a 7-3 season in 1996, the first winning season for Azusa Pacific since 1990. Shealy's Cougars fell to 4-5 in 1997, but in 1998  Asuza Pacific went 12-2, winning the NAIA national championship over Olivet Nazarene 17-14. He was named the NAIA Coach of the Year and received the Shutt Coach of the Year Award from the American Football Quarterly.  It's certainly a positive statement when in year four of a program, generally considered one of the first years where a coach has primarily his own players, Shealy took his team to a national championship.

Following his success with Azusa Pacific, Shealy would move to the Division 1A ranks with a secondary coaching position at the Air Force Academy.  Shealy would spend the '99-'04 seasons with the Falcons.  In that time, the Falcons reached the Silicon Valley Bowl (2000), the San Francisco Bowl (2002) and finished among the national leaders in both passing defense and scoring defense in 1999 and 2003.

After the '04 season Shealy would move on to UNLV, taking his first defensive coordinator job in Division 1A.  During his tenure with the Runnin Rebels, Shealy would also serve as the associate head coach and handle the secondary for UNLV.  The 2007 UNLV defense was the best for Shealy, checking in at 22nd in the country at years end in terms of pass defense.

After the 2008 season Shealy would return to his Alma Mater Richmond for a one year stint as the schools defensive coordinator.  The Spiders would finish the year at 11-2 before losing to Appalachian State in the FCS playoffs.  Richmond would finish at #20 in overall defense, #25 in pass efficiency defense and #9 in scoring defense on the year.  The run defense was a big part of the success of the Spiders ranking fifth in the country and a top 30 ranking in turnover margin certainly helps.  The Spiders most impressive win on the year turns out to be against a Kansas opponent last year the Duke Blue Devils.  Richmond would hold the Blue Devils to 16 points on the afternoon, the same total as Kansas would a few weeks later.

Shealy joins the Kansas staff with roughly 23 years of experience in coaching.  Most of his time was spent with the secondary and on the defensive side of the ball.  His experience as a coordinator and in the secondary will certainly be a plus.  This may not be as big of a name value hire as some, but not everyone on a staff can be.  Watching the Tennessee press conference to introduce their new coach I was struck by something Derek Dooley said.  Dooley was asked about his staff and answered by saying his father, Vince Dooley(NC winning coach with Georgia), told him a staff can't be full of HUGE names.  It can have some, but it also needs coaches who fill a very specific role and do that very well.  I thought that was a great point.  Vic Shealy has a lot of experience, has recruited California, the southeast, Oregon and the west.  His name may not jump off the page right now, but he might fill his role as well as anybody in the end.