What can I say, I like the plus/minus breakdown  - Denver 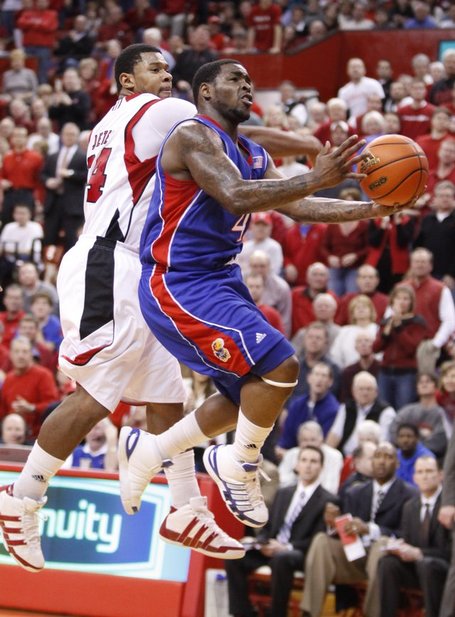 This team may not be falling apart!  Tyshawn might have figured out his role.  Sherron's the man once again and a Morris wakes up to play a great game.  As most people in the game thread will concede, this was far from a dominant performance.  Nebraska shooting out of their minds in the first half had a lot to do with that but some sluggish rotations on defense also likely played a factor.  Don't forget, KU also shot amazingly well as a team last night from beyond the arc finishing 13-21.  What does the Plus/Minus say?

I made one tweak to the formula for this game (still a work in progress here).  Instead of subtracting all free throw attempts, I only subtracted the misses.  Can't really count a foul against our players as a negative and then punish them for also being fouled.  I think this will also help Sherron's numbers quite a bit because he has been getting to the line and shooting a high percentage.

I'm actually surprised at the difference in the Plus/Minus for the two teams.  Kansas outrebounded the Corn 30 to 17, so that's a +13.  The Hawks scored 12 more points for a +12 and missed 8 fewer shots, sounds like a good recipe for success.