Get to Know the Coaching Staff: Buddy Wyatt

Share All sharing options for: Get to Know the Coaching Staff: Buddy Wyatt 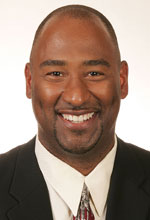 Moving from offense to defense in our "Get to Know" series, we start things off the way we ended things on offense.  With the big boys up front.  Although on the defensive side of the ball we aren't just talking big, we're hopefully also talking fast, athletic and explosive.

Probably the most critical position in all of football and one of the most difficult to find is a GREAT defensive lineman.  In the Big 12 that is especially important as the one thing that has proven capable of slowing the explosive spread offenses is a pass rush.

Kansas has focused in this area in terms of recruiting in recent years and has some relatively strong depth at both the defensive tackle and end positions headed into the 2010 seasons.  The man who will be in charge of maximizing that talent and developing it into a strength for the Kansas defense is Buddy Wyatt.  What Wyatt brings to the table is obviously the question at hand so let's dive into the resume.

Buddy Wyatt is another Texas grown football player that joins a Kansas staff built to recruit the lone star state.  Wyatt's college career begain with the TCU Horned Frogs where he lettered four years from 1986-1989.  Following his college career Wyatt would move on to a brief professional stint before returning to TCU as a graduate assistant for one season.

After the '95 season Wyatt would get his first exposure to the Big 12 conference in '96 when he served as the defensive line coach for Bob Simmons and the Oklahoma State Cowboys. At OSU, he worked with current NFL star Jamal Williams of the San Diego Chargers.

One season with the Cowboys and Wyatt would move on to the Northwestern Wildcats for two seasons before heading back to the Big 12 and Colorado in '99.  All three of those seasons were spent under Gary Barnett as the defensive line coach at each respective school.

Following Colorado, Wyatt would spend his first of two stretches with the A&M Aggies as he would join RC Slocum from '00-'02.  Wyatt spent his time with A&M working with future NFL players such as Ty Warren (New England Patriots), Rocky Bernard (Seattle Seahawks), Ron Edwards (Kansas City Chiefs and Buffalo Bills) and Ronald Flemons (formerly with the Atlanta Falcons).

The next stop was the Alabama Crimson Tide in '03 where he would remain with the Tide until '06.  During Wyatt's four years with the Alabama Crimson Tide he began to recruit on a national level. He was responsible for bringing the Mississippi High School Player of the Year to Alabama twice during his tenure and helped the Tide rank among the country's Top 20 recruiting classes each year.

In 2006, Wyatt would again move on down the line for a stretch of time that is a little concerning as a Kansas fan but at the same time every situation is different.  During the '06 season Wyatt would coach NFL first round pick Adam Carricker.  In '07 unfortunately Wyatt was still with the Huskers.  Yes, those Cornhuskers.  The ones that Kansas put a 76 spot on in Lawrence.  Following the '07 season as we all know, the Husker staff was cleaned out.

With the changes, Wyatt would move back to College Station for his second stint with the Texas A&M Aggies.  Through both 2008 and 2009 the Aggies obviously haven't overwhelmed on the football field but Wyatt has helped successfully recruit the state of Texas including two former 4* Kansas targets in Cyrus Gray an Tony Jerod.  Wyatt also helped coach Von Miller who was the FBS leader in sacks during the '09 season.

Wyatt comes to Kansas with both successful runs and some that left areas to be desired.  Still he is a known recruiter, has been a part of some very successful teams, and contributed to the success of several very successful players.  If he can do those same things at Kansas, this will be viewed as a successful hire down the line.