In this space was supposed to be an in-depth breakdown of Tyshawn Taylor, similar to that of my work after the Tennessee game.  However, being at home to watch the game live for the first time in forever caused me to forget to set my DVR to record the game, so this space is now filled with a lovely fluff piece about our favorite enigmatic guard. 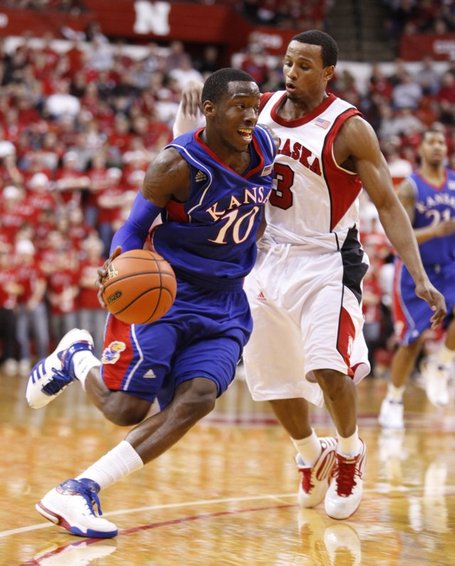 Guard play is key once March Madness rolls around.  The Kansas Jayhawks already have one of the most experienced, clutch and big game guards in the country in Sherron Collins.  Collins willed the Jayhawks to a win one week ago against Cornell and nearly did the same thing Sunday during Kansas' first loss of the season at Tennessee.  And, once again, when the third ranked 'Hawks needed a spark and a shot in the pan in the first half to get over the hump against Nebraska Wednesday night, it was again Collins who drained three pointer after three pointer.  He was four-of-five overall from three point range.

77 points in the last three games, and this team obviously belongs to Collins.  However, as Kansas fans know, you can't get by in the NCAA tournament with stellar guard play from one player.  The 2008 Championship team had the likes of Robinson, Chalmers and Collins - and it still took everything they had to beat Memphis - not to mention a far more consistent frontline of Jackson, Kaun and Arthur.  The collective defense from those guards was the staple of that team.  Solid leadership, good decision making and knowing their role made for a dangerous three-headed monster.

For this current team of Jayhawks to reach the ultimate goal and to cut down the nets in Indianapolis in March, Collins is going to need some help.  Tyshawn Taylor would be best suited to fill that role.  Having a second guard who can bring the ball up the court or allow Collins a seat on the bench for an extended period of time is an absolute necessity.  Elijah Johnson has a bright, bright future - there's no doubt about that - but he's a freshman, and only a select few freshman guards come in and make that sort of impact.  Many people, myself included, would like to see more of C.J. Henry, but Bill Self is the coach for a reason, as we are not.  Xavier Henry has the highest ceiling of anyone on the team, probably, but isn't a "guard type" to handle the ball confidently (or do anything confidently at the present moment, let alone lead the team).

So, the burden falls squarely on the shoulders of Taylor, only a sophomore, but asked to step up into a more prominent, consistent role.  He took a great first step in that direction Wednesday night.

A nice two game up-swing after his abysmal zero point, one shot performance against Cornell.  Better decision making, less one-handed passes, less out of control drives and more aware perimeter defense.  That's what the team needs from Taylor.  He doesn't have to score fifteen points a game.  There's enough other players on the team that can do that on any given night.  The thing that made the Robinson-Chamlers backcourt so dangerous wasn't their scoring ability.  It was:

For your money, Robinson was the best role player at Kansas in a long, long time.  He understood what his role was on the team and fulfilled it.  Maybe Russell should stop by practice one day and just talk to Taylor about what it means to not know his role on the team and how you go about finding it.  After all, Russell did nearly leave during his freshman year when he was going through the exact same thing as Taylor claims to be currently.

I will say this, though: If that is Tyshawn playing and not knowing what his role is within the team, opposing guards are going to hate facing him once he figures it out.