Get to Know the Coaching Staff: Darrell Wyatt

Share All sharing options for: Get to Know the Coaching Staff: Darrell Wyatt

Interview with visiting offensive line recruit Chad Kolumber to come this afternoon or first thing in the AM.  - Denver 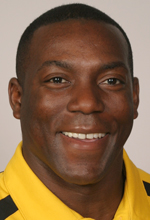 Another addition to the new Coaching Staff comes in the form of one of 2009's opposing offensive coordinators in Southern Mississippi's Darrell Wyatt.  Wyatt, like Mitchell, might be familiar to Kansas fans for a couple of reasons.  The first is that Wyatt also spent a stint with the Jayahawks early in his career.  The second and the one most Jayhawk fans likely remember would be his impact with the Southern Miss. Golden Eagles and their trip to Lawrence.

At the time Southern Miss. looked every bit the part of a tough non conference opponent with a potent offense and a potentially stingy defense.  The Golden Eagles would take Kansas down to the wire on that Saturday.  The offensive output by the Golden Eagles was the best the Jayhawks had seen up until that time.  Ultimately it proved to be an indication of what was to come.  Regardless Darell Wyatt's effectiveness as both a strong recruiter and experienced offensive coordinator make him a potentially solid choice for Turner Gill as the new Kansas co-offensive coordinator and wide receivers coach.  Now for a little deeper look at the resume of Darrell Wyatt.

Darrell Wyatt began his college football career at Trinity Valley College where he spent two seasons as a player before finishing his career at Kansas State in '87-'88.   After wrapping up his time as a Wildcat, Wyatt would jump directly into coaching and return to Trinity as an assistant coach for three seasons including 1991 when the team would win the Texas Junior College Champinship.  A native of Killeen Texas, Wyatt has spent much of his career in, around or recruiting the state where he has numerous ties to help continue Kansas' recruiting success in the Lone Star state.

Following his three season at Trinity, Wyatt would move on to Sam Houston State where he would spend three more seasons developing the teams wide reciever corps.

Wyatt's next stop is where his first notable success with a major player surfaces.  Joining the University of Wyoming in 1995, Wyatt helped guide All-American Marcus Harris to 78 catches for 1,433 yards.  His success would lead to his first major college football offer as Wyatt would move on to Baylor for one season in 1996 before taking a position with the Kansas Jayhawks in 1997.

Now clearly the Terry Allen years aren't the best years to be associated with as a Kansas football coach but Wyatt did spend four seasons from '97 to '00 as the wide receivers coach and eventually the offensive coordinator with Kansas.  Surprisingly Kansas' number 8 all time passer comes from Wyatt's time with the offense in quarterback Dylen Smith.  Also worth mentioning is a big time Wichita recruit and the number nine all time receiver Harrison Hill.  Hill was arguably one of the top recruits during the Allen era but struggled with injuries and health problems during his time at Kansas.

Following a one season stint at Oklahoma State, Wyatt moved to the other side of the Bedlam rivalry and joined the Oklahoma staff from '02 to '05.  In his time with the Sooners Wyatt handled the recievers and was the passing game coordinator during one of Oklahoma's most successful offensive stretches in history. Jason White's 2003 and 2004 seasons rank 3rd and 5th all time in terms of passing yards at the University of Oklahoma.

In addition Oklahoma's all time leading reciever Mark Clayton spent the final three seasons of his career under Wyatt.

In 2005 Wyatt would elect to try his hand in the NFL joining the Minnesota Vikings for the 05' and '06 seasons before returning to college for the '07 season with Mike Stoops at Arizona.  During his time with Arizona Wyatt would hold the title of passing game coordinator and wide receivers coach just as he had for Bob Stoops at Oklahoma.  In his lone season, the Wildcats ranked No. 10 nationally in passing yards
per game (308.5).

In 2008 Wyatt would move up the ranks with the Southern Mississippi under Larry Fedora.  Wyatt would act as the offensive coordinator for two seasons with the Golden Eagles before taking his current position with the Jayhawks.

In his first year with the Golden Eagles, Wyatt led an offense that broke 36 school records as the team recorded its highest ever total offensive yards mark of 5,636.  The team also finished No. 20 nationally in total offense, the highest-ever ranking for the Golden Eagles.

Wyatt guided an offense that also was led by redshirt freshman quarterback, Austin Davis, and had its top receiver, DeAndre Brown, just a true freshman.

Wyatt also mentored Damion Fletcher as he became the all time leading rusher at the school.

The top receiver, Brown, established a school record for receptions (67) and he finished first in the country among freshmen in receiving yards and touchdown receptions.

Wyatt is credited with bringing three four star recruits to Southern Miss. in his lone year recruiting for the program.

Once again Gill accomplished a major goal in the hire of Wyatt and that's in recruiting.  Wyatt has the Texas connections Gill is looking for and has been known to open some doors in the recruiting landscape.  Wyatt also brings with him some valuable experience with some very good offenses.  His experience with some very good recievers is also a very attractive piece of the puzzle for Gill and Kansas.