Get to Know the Coaching Staff: Reggie Mitchell.

Share All sharing options for: Get to Know the Coaching Staff: Reggie Mitchell.

Nothing like a tough loss to get everyone full force into basketball season.  Seems we have a resurgence in interest for the hardwood sport around here with plenty of fanposts and content covering the Jayhawks.  Still I felt I needed to provide the "Get to Know" for the rest of the new football coaching staff starting today and we'll work through the full group this week.  Also plenty of recruiting news is likely on the way as this weekend the staff hosts it's first big weekend of recruits.   - Denver 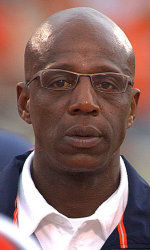 Just under a week ago Turner Gill finalized his coaching staff for the University of Kansas and it's football program.  The staff as a whole brings with it a good amount of excitement on a recruiting level for Kansas fans and certainly some valuable experience in terms of the X's and O's.

One of those names is that of Reggie Mitchell who comes to Kansas from the University of Illinois where he most recently served as the recruiting coordinator as well as an assistant head coach and running backs coach for the Illini.

His move to Kansas will actually be his second stint with the Jayhawks and with that in mind let's get reacquainted with Coach Reggie Mitchell.

Reggie Mitchell's college football career began in the MAC where he spent his playing days with the Central Michigan Chippewas.  Mitchell enjoyed a great amount of success starting for four consecutive years from 1978 to 1981.  Mitchell would be a part of two MAC conference championships and rush for 2,394 yards during his career with Central Michigan.  In his senior season of 1981, Mitchell was awarded team MVP honors after eclipsing the 1000 yard mark as a rusher for the team.

Following his playing days Mitchell jumped right into the college coaching career track as a graduate assistant with his alma mater Central Michigan.

Following his one season at CMU, Mitchell would bounce from Ferris State(WR Coach), to Michigan(grad asst.), to Western Michigan(RB), and finally a one year stint at Kent State(WR's) before taking his first more permanent position with none other than the University of Kansas under Glen Mason.

Mitchell would actually move over to Kansas with Glen Mason and take over as the defensive line coach for three seasons from 1988-1990.  He would spend 1991-1994 in the same capacity essentially but working specifically with the defensive ends.  Mitchell would contribute to the recruiting and coaching of some of the top defensive lineman ever to play for the University of Kansas during his tenure.

Also on the Kansas defensive line during Mitchell's tenure was Gilbert Brown.  Brown was with the Jayhawks from 1989-1992 before also being drafted in 1993 NFL draft.  Brown would be selected in the third round by the Green Bay Packers where he would become known as one of the premier run stoppers in the league.  Brown is also tied for 7th on the Kansas all time list for career tackles for a loss.  Interestingly Brown currently has a son who is a senior at Lawrence High and could potentially be a local recruit of interest for Kansas this year.

Also coached by Mitchell was Kyle Moore who from his defensive end spot remains 7th on the Kansas all time sacks list.

In 1995 Mitchell would move to the running backs coaching position with the Jayhawks for the final two seasons under Glen Mason with Kansas.  During that time Mitchell would coach some fairly successful Jayhawk running backs in LT Levine and June Henley. Henley ranks 2nd on Kansas' all time 100 yard games list while Levine ranks 7th.  Henley also holds the Kansas record with five 200 yard rushing games in his career.  In addition Henley holds the Kansas record for yards in a season and average yards in a game for a season, both of which he accomplished under Mitchell in 1996.

Following the '96 season Mason would depart for Minnesota and Mitchell would follow and continue to serve as the running backs coach for Mason with the Gophers.

After just two seasons with the Gophers Mitchell would finally move on from his 12 seasons spent with Mason and join the staff of Nick Saban at Michigan State.  In his first season Mitchell would act as the wide receivers coach but following Saban's departure for LSU, Mitchell would remain on staff through 2004 but move to the running backs coach and recruiting coordinator positions.

During his time at Michigan State, Mitchell recruited and coached two NFL first-round draft picks in running back T.J. Duckett and receiver Plaxico Burress.  Also a first-rounder and the 2003 No. 2 pick, receiver Charles Rogerswas a prized recruit for Mitchell while at MSU.

In 2005 Mitchell would move to his current post joining Ron Zook at Illinois as the running backs coach and recruiting coordinator.  In his first three seasons with the Illini, , Mitchell led the Illinois staff in building three Top-30 classes, including a Top-15 group in 2007. For his efforts, he has earned accolades as not only one of the best recruiters in the conference, but nationally as well. In 2006, he was named among the top-20 best recruiters nationally and was top-5 in the Big Ten as rated by Rivals.com in 2007.

On a personal level Mitchell was responsible for eight 4 star recruits and one 5 star recruit joining the Illini including Rockhurst standout quarterback from a year ago, Nathan Scheelhaase.

From a coaching standpoint with the Illini, Mitchell tutored the 2006 running back group to 188.8 yards per game, best in the Big Ten and 10th in the nation. Three-year starter Pierre Thomas twice earned honorable mention All-Big Ten honors under Mitchell's tutelage. The Illini had two running backs ranked in the Big Ten's top-10 for the season. Thomas ranked seventh with 62.9 yards per contest, while Mendenhall was 10th with 53.3 ypg. Additionally, Mendenhall averaged 8.2 yards per carry, highest in the league.

In 2007, Mitchell led the Illini running back corps to its second-straight Big Ten rushing title, topping its league-best total from a year ago by nearly 1,000 yards.

Mitchell guided Rashard Mendenhall to the finest rushing season in school history, smashing school records for most rushing yards (1,681), rushing touchdowns (17) and total touchdowns (19) in a season, and being named Big Ten Offensive Player of the Year. As a team, the Illini rushed for 3,338 yards and averaged 256.8 rushing yards per game, the highest total and second-best average in school history. The team not only led the conference in rushing but also ranked fifth in the nation.

Mitchell joins the Kansas staff in the recruiting coordinator and  running backs coaching roles.  Mitchell promises to be a major factor in helping Turner Gill as he looks to fulfill one of his early program promises, recruit...recruit...recruit.