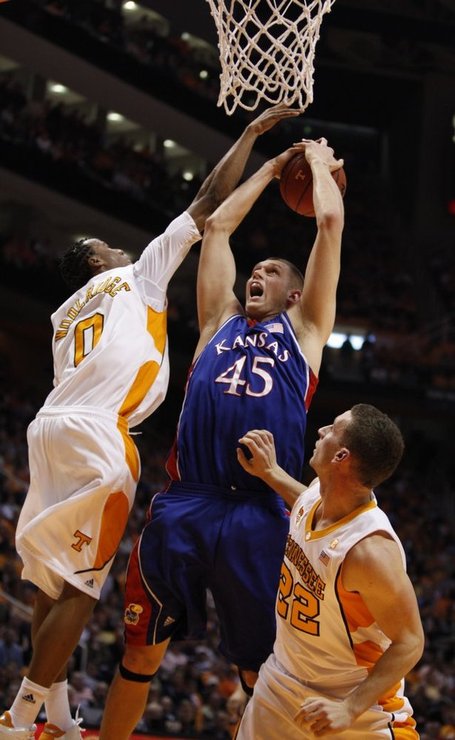 Cole Aldrich is a spectacular talent, a surefire lottery pick in the upcoming NBA Draft and arguably the most intimidating big man in all of college basketball.  At times, he is a man among boys on the basketball court.  Swatting shots, grabbing rebounds over opponents at ease, drawing lane violations on free throws and putting back missed shots with authority  - all done, of course, with a lovely grin sans one front tooth.  If you root for Kansas, you love Cole Aldrich.

Further proof that he is such an important cog in the 2009-10 Kansas Basketball team was brought about this week with Warden's Plus/Minus.  This measure is a fairly basic system in which each player is scored on a game to game basis, based on their statline.  Basically what it says is that Cole dominates, boasting a P/M per game average of 11.29.  This more than doubles his nearest teammate, Sherron Collins who checks in at 5.57.  Nothing far from the expected, although Collins' numbers seem a bit low for the effect he has on the team and the way he sometimes carries them.

Looking at Cole's numbers though, begs the question of how his P/M numbers are so high, when he seems to be having a "less than stellar" year for his standards?  Well, the same exact thing happened in Sunday's Tennessee game.  The game ratings tell the story.  Only seven points. So how would a +18 rating be attainable?  In a word, "rebounds."  Eighteen of them, to be exact.  Factor everything else in and the rebounds are what you get.  With such talent, Cole shouldn't have to rely on rebounds and rebounds alone to achieve a respectable P/M rating, should he?  The answer is no.

So why did he manage only seven points in rather big game, with his team in desperate need of an inside presence?  I went back and watched the game** and charted three things:

Just how big of an impact does he really have?  Does he deserve such a high P/M rating?  Well, let's have a look at what happened in today's game, shall we?

Is the picture starting to become clearer as to why Cole had so few points on so few shot attempts?  The way that you get only five shots from arguably your best player, with the biggest physical advantage of anybody on the team against the opponent (6'11" size) is to have 17 possessions when he is on the court where he doesn't touch the ball, even once, in the first half.  Yes, seventeen possessions without getting a touch at any point. Not to mention, only 11 touches total in the first half, while the team attempted thirteen three pointers in the half.  Explanation for shooting 35 percent in the half?  Possibly.  It gets better (worse) in the second half, though.

Yup.  You're reading the Touches diagram correctly.  Three touches.  Three.  Three touches, three shots, two makes and a foul on the other one.  How does that happen?  Well, it's pretty simple, really - you go 26 (not consecutive, but total) possessions in the half without letting him touch the ball on the offensive end of the court.  Staggering, huh?

Now, I could cut it off now and feel that i have made my point loud and clear, but what would be the fun in that?  Because, I've got more.  Something slightly positive, actually.

If you do the math (you don't have to - I've done it for you), you will find pretty plainly that Cole is an affector on the defensive end.  The extent to which this is the case may never be quantified.  It is only to ones imagination the amount of shots which are prevented from even occurring due to his intimidation factor and reputation.  But, I've tried to put a number to it anyway.

In the first half, Tennesse took 21 shots while Cole was on the floor, making nine (42.9 percent) - not terrible against Kansas, considering they allow only 34.4 percent made shots on the year.  The Tennesse numbers are only for when Cole was on the floor, so the numbers are a bit skewed for the entire game, but point taken.  Of those 21 shots taken in the first half, eight were taken from a spot where Cole could have an effect on the shot.  Three were made, giving you a (get ready for this - the introduction of the newest RCT stat) Vicinity of Cole field goal percentage (VoC%) of 37.5 percent - a little below the average for the entire half with Cole on the floor, and well below the percent for the entire half.

The second half numbers are even better.  Although the Volunteers outscored Kansas by eight in the second half, the vast majority was done on three point baskets while Cole sat on the bench for a curiously long period of time.  Anyway, Tennessee took 24 shots with Cole on the floor, made nine (37.5 percent) and that was that.  However, their VoC% in the second was an ice-cold 30 percent (three-of-ten shooting).  Cole was extremely productive in the second half, based on what he did with his very limited number of touches and his impact on the defensive end, measured in the Vicinity of Cole field goal percentage.

Losing the last game of the non-conference schedule wasn't the ideal way to head into conference play for head coach Bill Self and the boys, but hopefully it will serve as a lesson learned.  Having a dominant 6'11" center with skills on both ends of the court is not a right, but a privilege. Don't take it for granted and put it to good use.  Get back to practice, hop on that treadmill, run until the boss says stop and then do it again.  Starting now, you are 0-0.  It's a whole new ballgame and a brand new season.  The former number one ranking means not a thing - as does what will likely be a top ten ranking come Monday afternoon.  It's time for conference play, folks.

** Note: Watching a basketball game on the first speed of fast forward is enough to make you sick to your stomach.  The ball goes up and down and all around so quick.  But, when you are watching a game, and watching one thing, and one thing only - one person, to be specific - it is rather effective.  I will leave everything else about the game up to my fellow RCT members, as I have focused solely on Cole in regards to this post.