Share All sharing options for: A Deeper Look: University of Texas-El Paso

In what will hopefully become a weekly feature, A Deeper Look will focus on some non-football aspects of each university Kansas takes on. It's kind of a copy of ghtd36's series he did over at Rock M Nation for most of their opponents, but not really. Basically, the goal is to make you learn at least something about the university and football program, not team, that you didn't know before. I tried my hardest to make it funny, but I'm not really a comedy writer. So, there's a decent chance it is stupid. Apologies in advance.

The University of Texas-El Paso, unlike our good friend UNoCo, is known in the world. Also, as far as I know, none of the readers here at RCT had relatives who played QB in the mid-90s. So, yeah, I think that's a positive. With that said, let's get right on down to the perhaps-it's-funny stuff. You are all familiar with the general premise of the school. And that's enough for me.

1) Let's get this thing started on the right foot, with some history. Obviously, in the early 1900's, the legislators didn't really have a high opinion of these college-type-things, and so they gave them terrible, hideous names. See, UTEP (unlike UNoCo, we will just be sticking to the standard UTEP; no other rivals use the acronym UTEP, so we are safe there) was originally titled The Texas State School of Mines and Metallurgy. No lie. It was created as a school for miners. Not really sure why you needed a school for that, but hey, Chris Cooper in October Sky needed to learn how to mine correctly while being a total hardass somewhere. 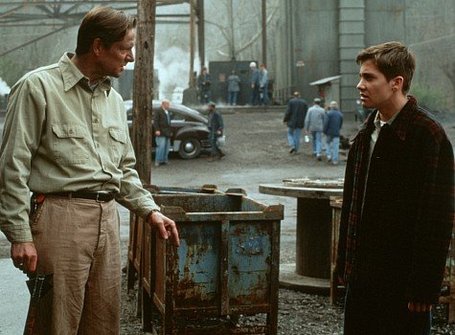 Dammit! That's not how we did it at the Texas School for Mines and Metallurgy! via mutantreviewers.com

That's about it for the funny names, though. It was then changed into Texas Western University, which is informative (it is in the western region of Texas) without being too obtrusive. I like it. And then, they had to ruin it by just conforming to the University of Texas system, and ruining all of its originality, perceived or not. Texas Western sounds like you are all alone, like you are some hick in the middle of nowhere that is proud of your school. Now, hell, no one even knows where El Paso is. Oh, wait, I know, it's in the western tip of Texas. It really isn't even in Texas. So then, you have all of these people questioning your Texas legitimacy, and it's all because trying to fit in with the Longhorns. Bad choice, Miners. Bad choice.

2) Speaking of the Miners, that would be their nickname. Their mascot? Uh, well, yeah, that would be an interesting story. See, back in the 1960's, there was no official mascot. And so the students got together and formed Clyde, who according to the Dean was "sorry-looking, pot-bellied creature, not fit to represent the Miners." Uh, yeah, ouch. I'm the Dean, and I won't give you a mascot using real funds, but I will belittle yours. Jerk. However, this Dean, Dean Joseph Ray, decided to improve upon the mascot and release a new one. Out came Paydirt Pete. Yes. Paydirt Pete. Let me say it one more time. Pay. Dirt. Pete. Now, they couldn't get this one right, either.

They first created this really sweet-looking, nice-enough-to-be-your-uncle "Sweet Pito". He wasn't a big enough jerk, though, so they brought a new Paydirt Pete. He didn't look mean enough, so let's change it, but the name is stellar, so let's keep it. That's some really smart thinking. Maybe somebody has inhaled a little too much coal and metallurgy in their time. Hmm? This Pete fellow used to be a heavy smoker, as the pipe remained in his mouth at all times, but they realized this probably sent a terrible message to the children of El Paso (all 18 of them), and so they got rid of it. You might say that's a lot of work, just for a mascot. And I would reply that I know it's way too much work. But hey, if it turned out well, it's okay. All's well that ends well. 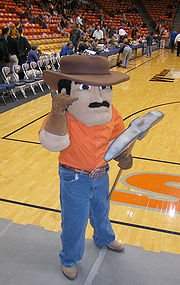 via upload.wikimedia.org
When I look at him, a few things come to mind. First off, he definitely looks like a jerk. Considering he doesn't possess a mouth, at least a visible one, that came across well (it's those eyes that stare into your soul, I guess). Second off, Paydirt Pete? Sorry, that's just ridiculous.
That's it.
3) UTEP, like a lot of schools, has a school alma mater. You might have heard it before. It goes like this:

Sound familiar? It most likely does. That would be because, uh, it is the alma mater at the University of Texas-Austin. Yes. Those Miners (and metallurgy!) can't even come up with a fight song of their own. They just stole one.

I guess, because they wanted some form of individuality or something, they decided to come up with a fight song that was distinctly theirs. When reading through the lyrics, it's quite obvious it will never be copied. Ever. I don't want to get into too much detail, but at one point they scream out (it's in ALL CAPS, so I'm assuming that applies some sort of Miner yell): "GO COLLEGE OF MINES!". You can't make that up.

They yell out "GO COLLEGE OF MINES!". Just like that. I don't know why you would refer to yourself that way, but okay. That's like being proud because you are the only school who offers a degree in Microsoft Word. I mean, yeah, I'm so glad that you formed an instituion of higher learning to teach people how to go underground and pick at things with a pickaxe. Congrats. More importantly, make sure nobody ever forgets it, by inserting it into your school fight song. Bravo. 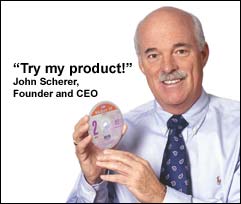 4) Yay! Famous Alumni time. It's time for me to save the post. This is my favorite part, because it's the easiest to make funny. The people supply the humour. And yes, there is a "u" in humour. Get over it, Warden. 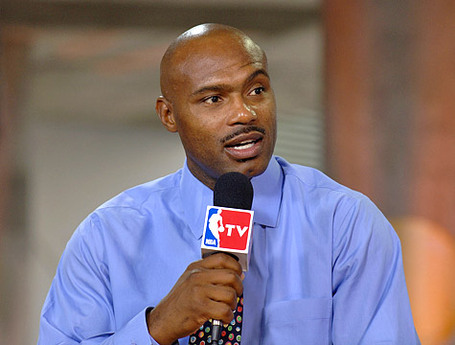 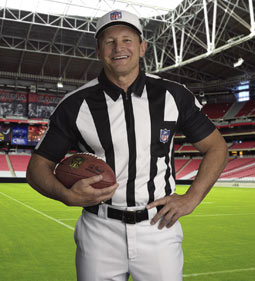 Ed Hochuli, the most famous NFL referee in the world. Whether it's for his MASSIVE MUSCLES (say it in an Ahnold voice, and it works better) or him screwing over the Chargers, nobody is quite sure. 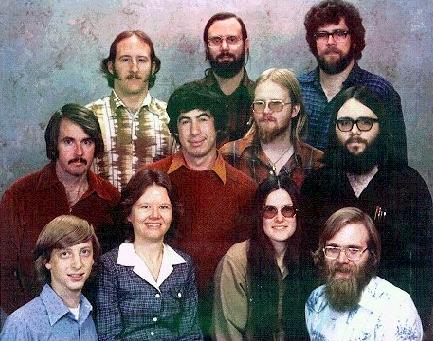 Middle row, far left (one with the really creepy mustache) would be Bob O'Rear, a co-founder of Microsoft and UTEP alum. Maybe it is the College of Microsoft Word! 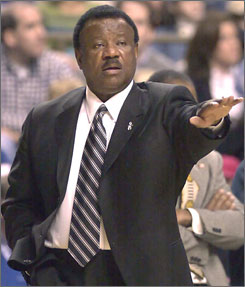 Nolan Richardson is an ex-Miner. I suppose he got the term "40 Minutes of Hell" from the required coursework down in the mines. Or, better yet -- living in El Paso any given 40 minutes. It's hot enough to be Hell.

5) So, on the front page of UTEP's football page, there is a big picture, with the subheading: "UTEP's head coach discussed the season-opening loss to Buffalo on Monday while looking ahead to this weekend's matchup with Kansas". Pretty standard stuff, definitely. This is the big picture in the background: 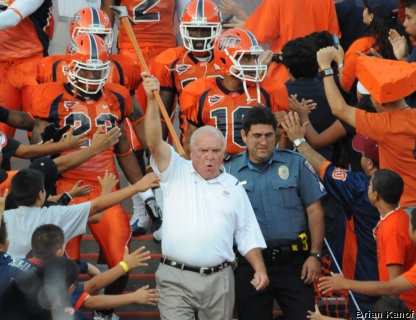 Uhh, it was just one loss Coach. No need to go crazy. via grfx.cstv.com
That's an axe, in case you don't get the joke. If you still don't get the joke, just remember he was fired in Alabama for going to a strip club. See, now it's funny.
Speaking of that incident, it basically never happened according to his coach's page on UTEP's official website. Alabama isn't listed at any point throughout the entire thing. Not once. It's like we left Washington State for UTEP. Hey, whatever makes you sleep at night, UTEP Athletic Director.
6) They really hate New Mexico State. Like, a lot. They have three separate traveling trophies that go to the winner, a spade (no, not the suit) and an old shovel that was literally dug up in 1947. Hey, man, whatever makes you want to beat your rival. The spade kind of makes sense, though, as New Mexico State used to be New Mexico A&M, and they use spades in farming (excuse me, agriculture), and apparently a spade is a key tool in the art of mining and metallurgy.

And then, recently, realizing that two traveling trophies aren't getting them any national attention, they decided to begin exchanging a Mayor's Cup in 1982. It would be a Governor's Cup, but nobody else in Texas is even really positive of El Paso's existence, so El Paso has to handle everything on it's own. In a way, it's like Sparta, or one of those old city-states.
They don't have the funds to add another trophy, I'm assuming, so instead they added a nickname to the game -- The Battle of I-10. That sure does show off the hatred. I mean, it is definitely right up there with the Civil War or the Border War. Definitely. The Battle of I-10. Oooh. Scary.
---
That one felt really subpar, and feel free to let me know. I promise, my feelings won't be hurt. UTEP just has a high opinion of itself, I suppose, and leaves little room for tomfoolery at its expense. It's okay. I'll make up for it next week with Duke.
The rest of the week should be football-focused. Which is good, because this isn't a guarantee win. Yes, I know an average-at-best Buffalo team just won in El Paso. But weird stuff happens on the road. Don't take anything for granted. It could be a funky one. Just please, don't blow it. Please.