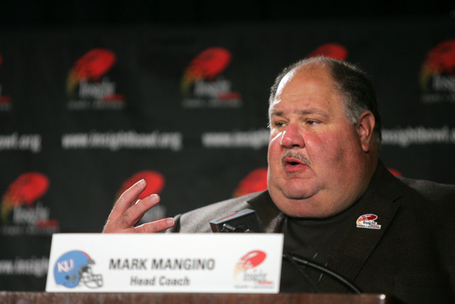 Week one is in the books and it's time to turn the page.  Coach Mangino give his final thoughts on the positives of Northern Colorado as well as some areas for improvement.  Coach also looks ahead to Saturday's opponent in UTEP.

From the player side we get to hear from regulars in Darrell Stuckey and Todd Reesing.  One of the impressive performers from week one in Chris Harris.  Freshman contributor Bradley McDougald and Justin Springer who returns to Texas and will see a familiar face in a UTEP uniform.

At the beginning of the presser the players of the week are released and Tom Mabry a freshman offensive tackle was awarded scout team player of the week honors which is certainly a positive sign in terms of the continued development of depth on the offensive line.

Opening statement on this week's  game vs. UTEP:

"We are preparing now to play UTEP. UTEP just lost a very tough ball game to Buffalo. As we prepare for UTEP, we understand they have a lot of talented players. They are very well coached by Mike Price, who is very well respected in the coaching profession."

On the offense of UTEP:

"Their quarterback, Trevor Vittatoe, is very productive. He throws the ball well and is an all-around good athlete. They have a bunch of receivers who run very well and can catch the football. They have a young man named James Thomas, who they kind of use as an all-purpose player. You can see him lined up at quarterback, running back; he is very speedy and very talented. Donald Buckram rushed for a little better than 100 yards last week. They have a very good offensive line. I am very impressed with their offensive line. They are physical, athletic and very talented."

On the defense of UTEP:

"On the defensive side of the ball, they have several good athletes. Their defensive ends are quick guys, athletic and play very well. Their linebackers are pretty decent and one of them is Justin Springer's twin brother. They moved him from quarterback to linebacker and you can tell he is still learning, but he is just like Justin in that he plays hard, he makes plays and he is a good football player."

"Their punter really booms the ball well, a guy by the name of Greg Hiett. He really gives them an added dimension on special teams."

On road game so early in the season:

On the UTEP quarterback Trevor Vittatoe:

"He has a little bit of a low delivery, but he gets the ball there. I can't say mechanically he reminds me of anyone in our league, but he sure can compete with quarterbacks in our league."

On UTEP vs. Buffalo game:

"Buffalo is a very sound, fundamental football team. They do not make many mistakes on either side of the ball. They pay attention to detail. That is two years in a row now Buffalo has beat UTEP; last year in Buffalo and then this year in El Paso. UTEP got off to a slow start and then things started to click for them in the second half. They had an opportunity to win the game, and then they made some mental mistakes, so for me, the game was sort of a toss-up."

"He is a serious student of the game. He puts a lot into what he does. He is big in the weight room. He works hard on his fundamental drills on his on time, as well as what we do together. He is really getting better and he is a lot of fun to coach because he is in to and it is real important to him."

On correcting and improving on pass interference calls:

"We have to look at them from a technical standpoint on why they happen. Then we break it down and our coaches sit with the players and go over it. Then we work on it on the practice field - what fundamentally broke down to create those situations. They are not accidents, they don't just happen; there is a reason why. It is usually a lack of being sound fundamentally - doing what you are supposed to being doing in those situations against those routes."

On the rehabilitation of KU linebacker Justin Springer:

"Being injured is a lonely world. You are not practicing with your teammates and you want to be out there, but you are not. And as much as the coaches and players embrace you and want you to feel a part of it, because you are not participating, it is lonely. But he has had good rehab. He has come back slowly and he has had a few roadblocks, but he is coming around now and we are easing him in to it, but he will be full speed before you know it."

"Moturi is a solid, dependable guy. He reminds me a lot of our Tertavian Ingram. David Beaty knows him because he coached him in high school for a while. But he is a quality player, a really good football player."

On what he has to improve:

"(I need to work on) tackling better and reading my reads a little bit faster so that I can make better plays. I left a lot of plays out there that I should have made."

On the defensive performance against Northern Colorado:

"We still have a lot of improvement to make on tackling and fundamentals and just reading stuff better. The biggest improvements always come from game one to game two. We are hungry right now and we are just ready to improve."

On what makes it difficult to win on the road:

On what the offense can do to improve:

"We all have our different areas. Each position has different areas they want to work on. For wide receivers it is probably holding onto our blocks and looking the ball all the way in. (Against Northern Colorado) we had a couple of drops and a couple of miscues when we were running different plays and blocking schemes that we can correct. That is probably going to be the main focal point this week."

On UTEP's game against Buffalo:

"Coaches have been telling us a lot that they are a great team and we can't use that game to hold against them. Buffalo just got them, so we have to still prepare like it is a whole new game on Saturday."

On facing a hostile environment:

"I haven't thought too much in depth about it. I know I have my team at my back and my coaches at my back. As long as I can distract the crowd as much as possible and just play football and worry about what is happening on the field, that will help me a lot."

On the game against Northern Colorado:

"I thought guys were ready mentally and I think we showed up focused and ready to play. I think we executed very well on offense and defense. I don't think we had a lot of mistakes out there, so I am very pleased with the first game."

On his initial impression of UTEP's secondary:

"They are athletic. They have guys that can make plays and they are talented. They have athletic guys all over their defense. It is definitely going to be a challenge for us. We have to get ready and prepared, especially knowing that they are probably going to score some points with the reputation their offense has. It will be a good challenge for us."

On taking the team's momentum on the road to UTEP:

"We definitely want to build upon what we did this last week. It was definitely a good start for us. But, obviously, going on the road, it is a whole new environment. We have guys that are young that are going to have to learn to play on the road and deal with the hostile environment. Any time you play on the road, it is tough - it doesn't matter if it is conference or non-conference. It is going to be a big game for them and it is a big game for us. We are going to have to have even more focus this week in practice and get ready and prepared the best we can. We want to start our first road game on the right foot."

On the Texas heat:

"I don't think it should be a problem. We have been working hard the last eight months conditioning. We worked out all summer in the heat and had two-a-days. I think the guys are in good enough shape and everyone is well-conditioned enough, any heat should not be a problem. We had a little heat this past Saturday, and everyone was all right. I don't see that being a problem for us at all."

On the importance of getting a win on the road:

On cheering for his brother (Jeremy, a starting linebacker at UTEP) and UTEP:

"Big time. Last week I was watching that game and I was really disappointed they lost.  But of course this game I'm not."

On talking to his brother after the first weekend:

"I just told him a couple of things he needed to work on like staying lower and wrapping up.  Sometimes he didn't wrap up and he missed like three tackles and should have had 13 tackles, but he missed three."

On knowing UTEP better than anybody on the team:

"I know a lot of their players.  I know their quarterback personally, I know their linemen. I know everybody on that team.  They are going to be a lot better than they played against Buffalo.  I promise that.  They are really good offensively. They have very fast receivers, a very good quarterback and they are confident, real confident that they can beat us and we have got to play hard."

"He is getting more comfortable. Whether it is playing nickel, corner or safety or whatever position we need him at. He is pretty athletic and he has got a lot of confidence and we help him a lot and support him. He is just a player who will go out there and do whatever it takes to help his team and I think that is what motivates him the most."

On seeing improvement from game one to game two:

"There is always so much more improvement from game one to game two because the fact it is game one you get all those different doubts out about playing at the level, especially when you have got a lot of young players. Whether it is offense or defense, they get a lot of those nerves out."

"They are pretty talented. They have a pretty balanced offense in passing and running the ball too. It is one of those things where we are going to have to read our keys and stick to the fundamentals and read our assignments and carry them out."