Perhaps the biggest question mark headed into the season was the Kansas Jayhawk linebacker group.  The candidates were numerous but unknown and how effectively they could replace last years group also caused some concern.

This group has also been probably the most difficult to grade out at this point as well.  With different player combination's to go with up and down performances this area has probably given the most incomplete picture through three games of the season.

However, with lower than normal expectations for the group and a switch to a 4-2-5 defense the pressure was not nearly as great and perhaps the grading not nearly as harsh as it could be in other areas. 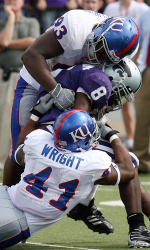 Arist was likely the only player headed into the season that could have felt even remotely secure with a chance to start.  Wright saw the field fairly regularly in 2008 and took that experience into the spring, separating himself from most of the others.

Against most spread teams the undersized Wright will be in a position of coverage against a running back.  Through three games this season it's clear he's been keying on the backs, and when they remain in as a blocker he's expected to play football and make plays.

In that role Wright has been pretty good.  When his key has become the ball carrier he's done a solid job of attacking the line of scrimmage with the primary exception being some of the UNoCo game early.  He's also done a good job playing the free linebacker in a QB spy type role.

As he get's more comfortable during the year Wright has a chance to be very good for Kansas.  His play against the run has been good, his pass covering skills have been decent and he has also managed to get in the face of the QB from time to time in the varying blitz packages.

B+ for Wright through three games.  14 tackles on the year, 1 for a loss and a pass breakup.  The stats don't tell the whole story and I certainly hope his injury from last week was but a precaution as Wright is well positioned to be a factor for much of the season. 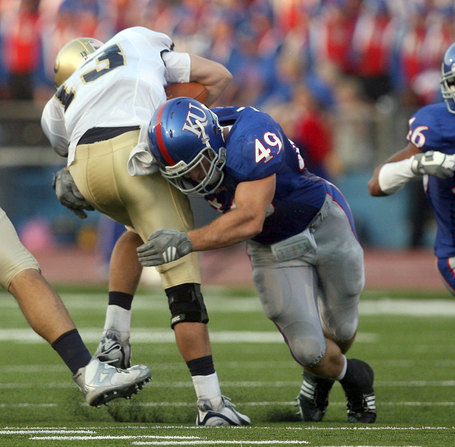 
Drew Dudley?  I thought he was a fullback?  Oh wait, wasn't he a Linebacker before that?  Dudley was grouped in with the top linebackers in the state of Texas coming out of high school and he's finally getting a chance to show it.

18 tackles, 5 tackles for a loss and three sacks for a guy that as off April wasn't even expected on the defensive side of the ball.  Dudley has attacked the line of scrimmage, made plays and pressured the quarterback when he's been asked to do so.

Not much more to say for Dudley as this guy deserves an A so far.  Very solid play, shows great aggresiveness against the run and is a huge part of why the Jayhawks have pressured the quarterback early this year. 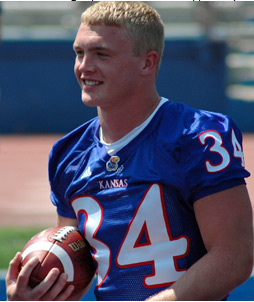 Huldon is going to be a very good linebacker in the Big 12 and should be a welcome sign for Kansas fans worried about defense.

During the first two games Tharp was active but not necessarily up to speed.  Basically when the guy was in, he was near the play but maybe a step behind.  No problem, this is completely understandable for a true freshman at one of the most physically demanding positions on the field.

Game three though Tharp took advantage of the departure of Arist Wright to show the Kansas fans what Coach Mangino had been raving about. Tharp recorded 10 tackles against Duke and also put the quarterback on the ground twice.  Not only was he active but Tharp was making the plays and looked great.

A- for Tharp, since he was a freshman I wasn't expecting to recieve a huge contribution but through three games he's proven that may be a bit premature.  The bar has been raised for Tharp, I don't see him cracking the lineup as a starter but he'll be a valuable part of the rotation.

The temptation was there to go with an incomplete on this one.  Headed into last season the expectation was that Springer would likely fill the role of departing senior Joe Mortensen.  Two injuries later that isn't the case.

Springer's knee injury is obviously well documented, but what's been discussed a little bit less is a pulled hamstring which nagged at him for much of the preseason.  It's never fair to fault a player who's fighting through injuries but based on expectations alone I think Springer is probably performing a little lower than his full potential.

Springer is in the rotations, he's made a few nice plays but I'd tend to believe he might not be at 100%.

C+ for Justin although I really hesitate because it's hard to say how far "back" he really is.  However, if you are out there as an athlete and a competitor excuses aren't an option.  All in all this was a tough one, might be premature and a little harsh but I'm a big believer in Springer's potential as a player.

Steven Johnson's story has been well documented and he's a player that has quietly caused a stir in terms of his potential.  A sophomore that is much older due to a variety of circumstances Johnson is one of those players that at this point expectations are huge but the potential is high.

If Johnson were a stock, he'd be a buy.  Low risk with a potential for a very high reward.  Through three games Johnson has been solid in the backup role in the middle.  Most of his minutes have come late in games but he's done an admirable job filling in and making plays where he can.

It's tough to get a great look at our defensive backups late in the game as the whole complection changes.  When Kansas is up big they churn the clock while the opponents are pass happy and throwing it quick, early and often.  That doesn't exactly lend itself to huge plays for linebackers.  Still though Johnson is on the board with 8 tackles and a sack this season which is solid for his role at the moment.

B for Johnson as I think he's performed well with what he's had the opportunity to show.  It's not enough to go bonkers with optimism but he's progressing and I could see him becoming an eventual program player at the linebacker spot in the future. 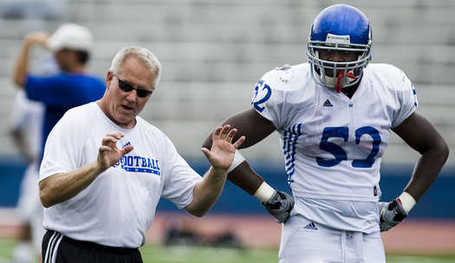 Brooks had some pretty high expectations coming in but a late arrival on campus and a family emergency during camp has slowed his progress down a bit.  Certainly things have not been at the fault of Brooks in terms of how they've played out and he deserves a little more time.

However, based on what the expectation was through three games and what we've seen, Jayhawk fans are certainly left wondering about Kansas' latest JUCO acquisition.

Brooks at times has shown the ability to be a very aggressive attacking linebacker, but a few times he's over run plays, put himself in bad position and other minor mistakes that come with the adjustment to the next level.  Combine that with what I'm sure has been a steep hill to climb in terms of conditioning and perhaps expectations just need to be tempered a little bit in terms of what we expect from our JUCO transfers.  Especially in the instance here where Brooks was a very late arrival.

C for Brooks so far because the hype machine that rolled into town with him was running at full strength.  After three games I'm ready to step back, adjust those and watch him with a different mindset.  Vernon has the potential to make a big jump through the season and I'm looking forward to watching that progress with the full understanding that he has to become good before he can get to great.

Coaches weren't initially included in the early season report cards but Bill Miller deserves special mention.  Kansas had a complete turnover in the linebacking ranks and slim if any experience with the players at camp.

Miller has found combinations that work, used players in ways where they can be successful and in because of that we've seen a generally more aggressive defensive scheme this season versus last.

Granted the competition level always has to be taken into account but right now when we blitz a linebacker, they are disrupting the play.  Sometimes that's a sack, sometimes it's a tip and sometimes it's just putting the QB on the ground after the throw is made.  Regardless Bill Miller has effectively worked with this group and made our defense more productive because of it.

Yes the defensive line and the secondary have more experience and higher expectations, but the linebackers do deserve credit early because it hasn't looked like as big a dropoff as some expected. 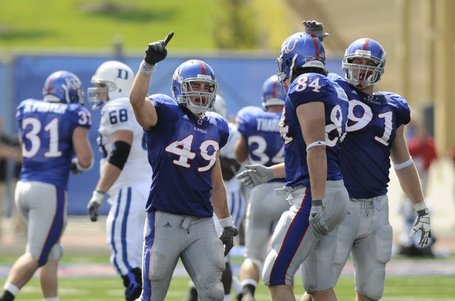 Overall the linebacking corps has been a pleasent surprise.  It get's much more difficult in the weeks to come, but it's probably safe to feel a little bit of relief at this point as the group has been playing at a decent level through three.

The fact of the matter is that this was a major area of concern even within the program headed into the year.  However, today Bill Miller and his linebackers have given everyone a little bit of a reason to exhale and remain optimistic...albeit cautiously optimistic.