Share All sharing options for: Youth in the Backfield Early Season Report Card 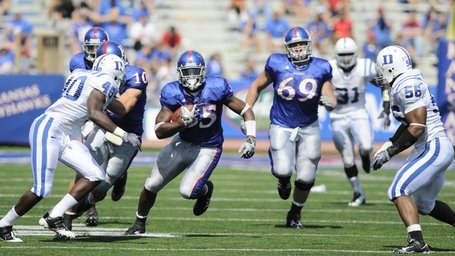 The second installment of the Kansas Jayhawk early season report card surrounds more than one question mark headed into the season.

The first was one of immediate consequence as no one was really quite sure what the Jayhawks had beyond Jake Sharp in the backfield.  Candidates included Rell Lewis, Daniel Porter and true freshman Toben Opurum.  In most college football circles the Jayhawks had cause for concern here if Jake Sharp were to go down to injury.

As we all now know, that has happened.  Granted it was against Duke but there is also a chance that Sharp who is battling a nagging calf injury may not play this week either.

The other area in the backfield that deserves and early season grade out is that of the backup quarterback.  Kale Pick, Kerry Meier and Jordan Webb were all moving in the rotation early but it's clear that Pick is the man at the moment.  While this spot is likely to see less and less action it certainly is relevant through a quarter of the season and worth a look.

Toben had expectations coming in as he was recruited by Notre Dame and Florida along with Kansas as a four star running back out of the Dallas metroplex.  After choosing the Jayhawks the question was how quickly and how effectively he could be implimented into the offense.

Through 3 games Opurum has carried the ball 41 times for 240 yards, 5 touchdowns and a 5.1 yard per carry average.   All this while typically playing in a supporting role.  Projecting those numbers out right now, Toben is on pace to run for 844 yards as a true freshman for the Jayhawks.

What's more impressive though is that he stepped into the featured back role in week three with the absence of Sharp and while the styles are completely different the result was still just as effective.  It's likely if Sharp is out again against USM that the Jayhawks will throw Rell Lewis into action to bring that burst opposite Opurum but at least one of the two pieces is a fairly well known commodity early.

Toben grades out at an A through three games.  He has performed at a high level, earned some trust amongst the team and has anyone ever seen this guy finish a run where he doesn't fall forward? 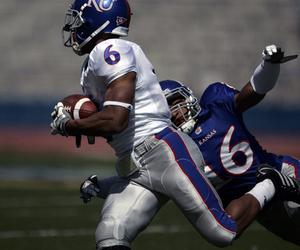 Rell was the top rusher in the spring game but has been fairly nonexistent to date.  Early on he had a few very late carries and if Sharp were not out last week he probably wouldn't even factor in down the road.

However, with Sharp's potential of being out and the nagging nature of injuries in football Rell Lewis does step back into the picture and despite looking good in very limited carries he's to difficult to assess at this point.

USM could present a golden opportunity for Lewis to show the coaches he's a capable guy for this team and further position himself for a run at the two deep in 2010.

Incomplete so far for Lewis but I'm a little excited at the prospect of maybe seeing what he can do this week.

Kale Pick won out in the backup quarterback spot to start the year and the question quickly turned to how good can he be in 2010.  He's seen about a half quarter of action in each of Kansas first three games and so far so good.

Pick is an athlete and that much is clear.  He's fast, makes good decisions in running the option and has shown great field awareness in running the ball.  Based on that alone he grades out extremely well.

The area where things are a little more foggy are in the passing game.  Clearly the Jayhawk staff is in a position late where they are trying to churn the clock.  Clearly we aren't going to see a whole lot of the Kale Pick arm and mostly how he does with his legs.  However, the few times he has thrown it's been out routes or swing routes and the throws haven't always been the best.

No doubt it's tough to turn it on and off but with the limited action seen passing the ball it's tough to give Pick a glowing recommendation just yet.

B grade for Pick.  Absolutely one of the most exciting quarterbacks running the ball in sometime, but haven't seen enough through the air to say he's an A and ready to take the reins of the Kansas offense without missing a beat. 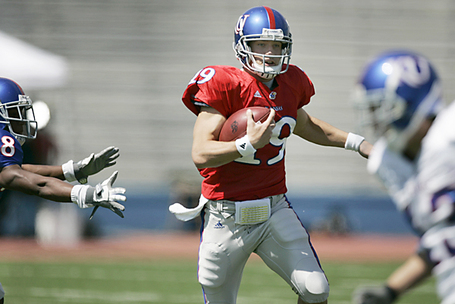 Overall the future has a lot of potential for Kansas.  The question has been around since the end of his sophomore year in terms of who would replace Reesing and it looks like there is a capable backup waiting in the wings.  Pick will get the opportunity to show he can throw but for now, it's evident he will bring a whole other dimension to the offense with his legs.

With Toben Kansas has a running back that will only get better with time and one that will be a mainstay in the backfield for the next several years.  If Rell can step up next season into the speed back role, Kansas may never miss a beat especially with the depth being developed up front.