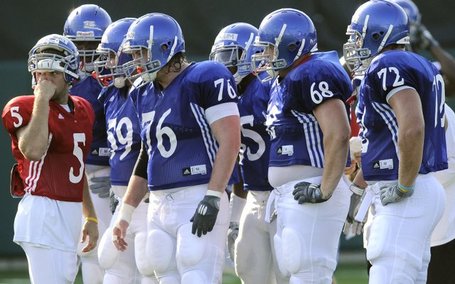 In the preseason we looked at several areas that would play a major factor in how the Jayhawks season would turn out.  The offensive line, running back depth, defensive front seven pressure, the linebackers and the backup quarterback to name a few.

Three games in now and as sad as it may seem we are already a quarter of the way through the Jayhawks regular season.  So how does everyone grade out so far?  Taking into account experience at the position, maturity in the system and even player expectations here's a bit of a subjective look at how the offensive line has graded out by position?

Starting with the left tackle position we have what many considered the biggest question on the offensive line headed into the season with Tanner Hawkinson.  A redshirt freshman who isn't even a full year into playing the position has bounced from tight end to defensive end, tacked on 40+ pounds and moved to the toughest and most scrutinized position on the offensive line. Granted the competition hasn't been the stiffest but he's still performed admirably through 3 games at a brand new spot.

Tanner does have all the tools as we've been led to believe from day one, possessing quick feet, athleticism and he seems to be settling in to his new found frame.  Tanner has protected the backside of Todd Reesing, gotten off a solid first block in most running situations and has done so with limited help from the tight end position.

Now it's possible if expectations were higher Hawkinson could be graded lower.  However, for a guy that as of one year ago joined the Jayhawks as a 240 lb. tight end, one can't help but feel optimistic for what's to come.  There will be bumps in the road as conference play begins, but Hawkinson should have a bright future with the Jayhawks.

B+ for Hawkinson, he's handled the transition well and with time he looks like he could very well be a big time talent at the left tackle.  Things will get much tougher from here on out though and the bar has been set a little higher after the first 3 games. 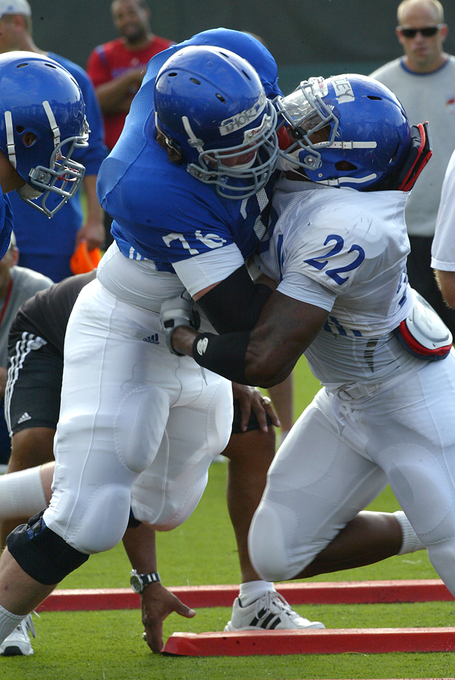 Brad Thorson's move to left guard in the offseason may well prove to be one of the most important of the year.  Kansas likely knew the fate of one of the guard spots all along but the left side was a bit of a question mark.  Kansas had several talented redshirt freshman fighting for the role, but consistency can always be a concern with youth.

Thorson has brought stability and consistency to the left side much the same way his counterpart on the right provides the interior.  Entering his fourth season of major college football after two with Wisconsin and now one with Kansas, Thorson knows what it takes, he is extremely intelligent and brings an aggressiveness and athleticism to this spot that is important in Kansas' offensive game plan.

Thorson can get out and move, make a hit, finish a block and has been reliable through three in terms of being at the right spot at the right time.

A- for Thorson, not a lot of expectations at this spot going in and he's provided a solid upperclassmen on the interior.  Thorson's addition changed us from a potentially very young offensive line, to one with a little more maturity. 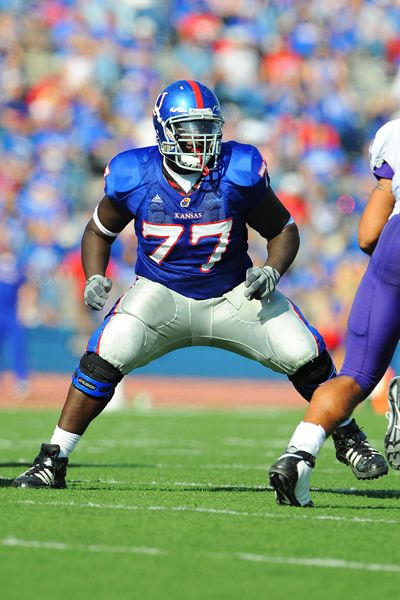 With Hatch it's not that he's doing anything wrong, it's that he's just not quite to the level that many expected yet.  Now that may have a whole lot to do with his reported illness as teammate Jeff Spikes noted him vomiting in the locker room prior to the UTEP game and then apparently all over the Sun Bowl field as well.  Now that's the only game we have him reported to be ill, but odds are if he's like the majority of the world he wasn't 100% the next game either.

The other concern with Hatch has been the consistency in his snaps.  Obviously one of the most important roles for a center in the spread is to get the quarterback the ball cleanly so he can make his reads quickly and make the throw.  It's been discussed that Todd hasn't always looked in sync this year and at times high and low snaps could be too blame.

Still Hatch deserves the benefit of the doubt as he was Kansas' best lineman by the end of last season and he should come along this year as he get's into a groove.  Low grade on this one primarily due to expectations, but by no means has Hatch been a MAJOR weakness to this team.

B- for Hatch, because he's better than we've seen.  Hatch has been billed as a future All Big12 center and both his game and leadership will step it up to make that happen.

Not a whole lot to say about this one other than Capra is steady as they come so far. Going back even to last season it was apparent that Capra had the football IQ and work ethic to be a player in this program and those qualities have put him in a position to succeed as a junior.

Capra is probably the first guy on the list who came in with expectations of being solid and has performed to those expectations.  Capra has graded out very well according to his own coaches and in watching the game it's clear he is getting the job done in his spot whether it be the right side or the occasional stint on the left.

Capra's story has been well documented and while he may not have been a well hyped recruit or an immediate impact player, he has turned himself into a formidable offensive guard in the Kansas system.

A for Capra, he's been reliable, consistent and when's the last time a guard received offensive player of the week honors. 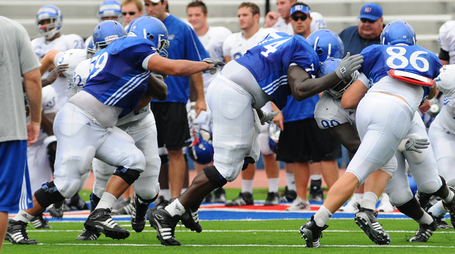 Jeff Spikes is a bit of a mystery at times, he has the physical tools and was once hyped by the coaching staff as the next great left tackle of Kansas football.  Sure that's a lot to live up to but Spikes hasn't even been afforded the opportunity to fulfill that role as he's been "downgraded" to right tackle.

Spikes is however only a redshirt sophomore and it was always known he was very raw coming in.  I for one am also of the opinion that the right tackle is as important in many instances as the left, but due to the NFL millions that great left tackles command it's a position that can be overlooked.

This season the expectations for Spikes were stepped up a notch, he's performed well at times and he's also looked like a matador in the bull ring at times.  Spikes has looked fairly solid in terms of run blocking and it seems that comes easier to him which isn't a huge surprise as it often is for many.  However, in a pass blocking scheme he's improving but still not quite there.

This isn't a knock on Jeff Spikes as I do see him as a player in progress and someone that from a football IQ perspective isn't making as many mistakes as last season.  The issues at this point are fewer and with time he'll get there.  My concern is this, if anyone watched the Texas v Texas Tech game and saw Sergio Kindle destroy Taylor Potts coming off the right edge it had to make you cringe a little bit because Spikes can have those same struggles as the competition level picks up over the next three quarters of the season.

B- for what he's done so far, simply because I was hoping for more.  Still happy with his potential in the long hall and he does seem to be "getting it" a little more every game.

Off the bench thus far we've seen Thorson move to center, Trevor Marrongelli fill in at right guard and John Williams on the occasional jumbo package.  What we haven't seen is what we have depth wise at tackle.

Thorson can make the move to center if needed despite the concerns with his snap early on.  Good news is, if he is forced to make that move Capra is just as reliable on the left and Trevor Marrongelli is a firey, angry, solid replacement at right Guard.

Throw in the mix John Williams who the staff has given some snaps to early and Kansas has enough on the interior to feel confident.

At the tackle spots it's an incomplete at this point and truthfully there are a lot of things that could be done if one of the tackles needs replacing.  With the depth on the interior Kansas could move Hatch back to the outside, or bring in Ian Wolfe off the bench.  Neither is ideal but it can be done.

B- grade for this group right now.  Interior get's an A, while the tackle spot it incomplete.  Hopefully it won't matter anyway. 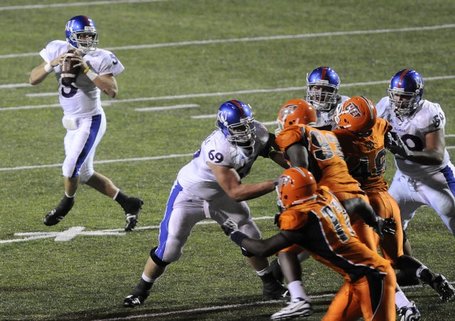 Overall this is a situation of being good but not great and the Kansas staff would likely say the same.  This unit has done well against the talent level it's been playing but it will need to step up their game in the coming weeks to perform against the top of the Big12.

One thing working in their favor is Kansas does have the benefit of breaking in so many new faces with such an experienced group on the field at the skilled positions.

It's clear the Jayhawks are improving the talent they are putting on the field up front, it's only a matter of getting the experience and developing their skills at this point.  If the development continues in the right direction, Kansas will likely look at this area as a position of stength in 2010 as they break in a whole new set of skill position players.