Share All sharing options for: Kansas Positional Preview: The Specialists

Special teams...sometimes good, sometimes bad, but always critical to the success of the team. The Kansas Jayhawks have seen their ups and downs in terms of the special teams play over the Mark Mangino era but make no mistake it's important to the Jayhawk staff and that is why you will often see starters take the field in critical times to play the roles often left to backups and youngsters in the program.

Today however, the focus is on the kickers, punters and long snappers. The guys that truly don't fit anywhere else on the field, those players affectionately referred to as the specialists. Kansas has a pretty good idea who will be taking the field this year in these positions as there wasn't a whole lot of turnover from last season.

Taking care of kickoff duties as well as extra points and field goals is junior kicker Jacob Branstetter. While Branstetter has sometimes been confused for a head hunting safety on special teams the 5'10" 182 pounder is all kicker and has developed into a pretty reliable one for the Jayhawks. While Branstetter may not see the field for any 60 yard bombs he does provide a steady leg going 9/12 on his career in field goals and 51/52 on PAT's. Branstetter as mentioned above also excels in kick coverage recording 7 tackles over the course of the year on kickoffs. 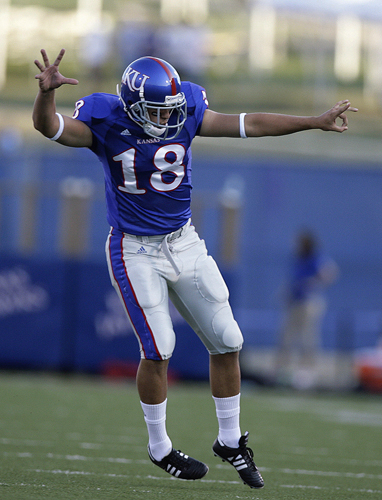 Next on the list is junior punter Alonso Rojas. Rojas joined the Jayhawks last year out of the junior college ranks where he was one of the top punters in the country. At 6'3" 220 he has pretty good size but honestly his enthusiasm is what always stands out to me. I believe it was the Colorado game and then again in the insight bowl where I saw two of the greatest punts of my life when Rojas flipped the field from inside the Kansas twenty almost completely around to inside the opponents ten. I don't recall exactly but I do know it was impressive and the guy gets fired up about it which I like. Rojas will again be a steady force as he looks to improve on a sophomore season where he averaged nearly 41 yards a punt with 15 inside the 20 and 11 of over 50 yards. Oh, and the one against Colorado was a 77 yarder!!!

So who get's these guys the ball, Jeremiah Hatch maybe? Nope we've got a long snapper on the roster and a good one at that in Kayl Anderson. If I could go back in time I think I would have pursued this as a career of my own. While my technique was rather unorthodox, I could nail a target with a long snap from about 25 yards fairly flawlessly. Getting back on topic though Anderson is entering his 4th and final season as the Jayhawks long snapper and without looking I'd have to guess he might be the most experienced guy from a game appearances standpoint on the team.

Now what's that you say, whoever will we get to replace Kayl Anderson. Yes it is a concern and perhaps it will be featured in next year's most underrated concerns series by Rock Chalk or perhaps not. On the roster as of August 17th, waiting in the wings is the future of the position Justin Carnes. Who's that you say, well I don't know. What I do know though is that Carnes is a 6'3" 250 pound long snapper out of La Porte Texas, and if there is one thing I know about Texas football, it's that they produce long snappers so I will rest easy on this one.

Also on the roster as an option at kicker is redshirt freshman John Millsap. Millsap is a 5'10" 150 pound walk on kicker from Andover Kansas.

OK, ok, enough of the satire, this really is an important area and we do have some very solid players as specialists, but what about kick and punt return?

Returning punts and kicks is pretty wide open this year as the staff has been working a variety of guys we've already discussed. Returning punts I wouldn't be surprised to see Daymond Patterson back their again as he is dangerous in the return game.

On kickoffs I'm hopeful that improved blocking means improved performance in this area. While Briscoe has been listed 1st on the depth chart, I'd be anxious to see McDougald or one of the other youngsters that have impressed take the duties. Not that we should burn a redshirt just for kick return, but if it's an area they can contribute I say let's give it a shot.

So that wraps up our entire preseason breakdown from offense to defense to my lazy effort on the special teams. Camp wrapped up Wednesday as classes started Thursday, things are certain to really start heating up over the next couple of weeks as Northern Colorado and Sept 5th are right around the corner.