The importance of special teams to the game of football cannot be overstated.  While the offense and the defense see the bulk of the minutes, the few minutes spent on special teams can be huge in terms of the outcome.

Another area where Kansas hasn't ever really gone out and made an aggressive move to improve is in the field goal kicking game.  Don't get me wrong I'm a fan of Jacob Branstetter, but he seems to have fallen in our lap.

This year however in the class of 2010 Kansas has gone out and gotten a kicker for the future.  It came as a bit of a surprise but Arvada Colorado kicker Justin Castor has committed to and appears Lawrence bound.

Once again Sunday night I had a chance to speak with the Kansas kicking commit who comes out of my own backyard here in Denver.

All right, Justin to get things started you kind of came out of nowhere to commit to Kansas and honestly I think some were surprised that the Jayhawks would offer a kicker in a class so small. How did you end up with the Jayhawks and what about you did the coaches see as too good to pass up?

Well I started receiving letters from KU in the mail in January and February which immediately sparked my interest. The second I got a camp brochure and looked at the campus online I was hooked and signed up immediately.

I think they what the coaches liked is that I am an all around athlete. I also got along really well with a few of the coaches and everything just seemed right.

At the KU kicking camp I had some really good kickoffs with great hang times. I was also able to show my accuracy and distance during the field goal portion of the camp. During the field goal portion I also showed that I had the ability to kick off of the ground without losing any of the height or power on my kicks. I think these qualities are what the KU staff was looking for.

Tell me a little bit more about your kickoff distances/hangtimes along with your field goal distance?

in general? or at the camp?

How about just in general.  Unless something at camp was a personal best or something like that.

My kickoffs have really increased this year in both hangtimes and distance. This summer I had numerous kickoffs that were 70+ yards with hangtimes around 4.5-4.75 seconds.

My field goal distance also increased during the off-season into the summer. In May of this year I was able to kick a 65 yard field goal in practice and I also managed to hit the crossbar at 70 yards, but couldnt quite make it.

What's your long in a game situation?

My longest field goal in a game is a 53 yarder. 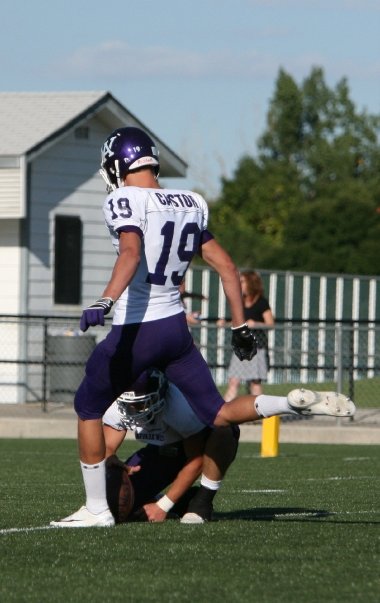 What other schools were recruiting you and what about Kansas impressed you and made you want to go ahead and pull the trigger?

I had an offer from Wyoming and I was being recruited by CU, K-State, Stanford, and CSU for track.

There are many reasons I decided on Kansas. One of the main reasons was that I fell in love with Lawrence after the camp. I got a chance to see some of the town and tour a little bit of the campus and I absoluetly loved it.

Another reason I chose Kansas was the coaches and the facilities that KU has to offer. The coaches were all really nice and showed a lot of pride in the KU program which was important to me. I also really liked the people in Lawrence, they all seemed really nice and down to Earth. Overall Kansas just seemed like the perfect fit for me.

So CSU offered you for track? What event, and what other sports are you involved with outside of football.  It sounds like you must be a bit of an athlete.

CSU never officially offered but I talked to the coach many times before I got my offer to Kansas and he said that he wanted to get me up at CSU to Triple Jump. I'm in football basketball and track.

Who recruited you for the Jayhawks and did you get to know any of the other guys on special teams there currently?

Je'ney Jackson is the coach that recruited me. As far as players I have been talking to Jacob Branstetter on facebook a little bit since I got my offer but just briefly.

Do you think you'll have the linebacker instincts that Branstetter has as a kicker?

That's sort of a running joke but he's made a few touchdown saving tackles on kickoffs and they were surprisingly big hits.

I hope so but there's only one way to find out(laughs).

I think we'd prefer you just kick it through the back of the endzone.

Well that's one promise I can keep(laughs).

Glad to hear.  Now obviously you've got another year before you head to Kansas so what are you hoping to accomplish to help improve yourself in that time as a kicker?

Well distance and hangtime are always on my mind. The stronger I can get before I get to KU the more that is going to help me increase both. Also my consistency is something I would like to maintain this season going into next summer as well.

Any last words or things you'd like Kansas fans to know about our next kicker? This is certainly an area Kansas fans have been hoping to address for sometime now.

Well I'd like the fans to know that I cant wait to get up to Lawrence next summer and become a part of the community and I'm looking forward to helping the Jayhawks get that Big 12 Championship that they have been waiting for.

Great, well appreciate your time. I'll have to get up and check out one of your games and maybe we can get a quick video interview even.