This. Is. Incredible. Not to bump JQ's work down too much, but I felt KC deserved some special FrontPage props for all of the hard work he put in. I've only skimmed it so far, but it was an epic skim. And appears to be an epic post. (And yes, eventually I will realize that it is me who is "supposed" to be posting this quality of stuff and start.) Thanks, KC. -- rockchalk

The entire state of Texas still feels as if they were hosed last year when they were overlooked by the final Bowl Championship Series (BCS) standings in favor of Oklahoma to appear in the Big 12 Championship game.  This was just the latest blemish on the already acne-riddled face of the BCS.

In an attempt to avoid the BCS controversy from recent years, and to find a true "national champion" year after year without fail, NCAA Division 1 College Football must do the following:  1) restructure the way "conferences" are set up; 2) alter schedules and the means by which "conference" champions are determined; 3) let the hated-by-all BCS cease to exist and implement a version of full season qualifying in order to gain a spot in the national championship "playoffs."

For those that believe that to have a "playoff" and do away with the current bowl system is the only way to determine a "true national champion," this theory will come as somewhat of a surprising compromise to you.  In the current format of Division 1 College Football, it is safe to say that crowning and undisputed national chamion is not realistically feasible.  There are certain conferences that are arguably and inarguably in some cases, just tougher and stronger than others, giving the advantage to the team from the weaker conference team on the field, but the advantage to the team in the tougher conference in the mind of voters, which is ultimately what matters most.   There are too many variable factors in this formula.

There is no denying that an SEC conference schedule is tougher to navigate through with zero, one or two losses than to accomplish the same feat in the Pac 10 conference, for example.  Also, there is a conference championship game in the SEC, while there is none in the Pac 10.  The playing field across the nation in College Football is uneven.  The only way to find a "true national champion" year after year without stepping on the toes of universities, teams, coaches or fan bases is to let it be played out on the field; but, to be done so in a fair, even and non-arbitrary way.  The current conference structure must be done away with, though, to achieve this.

As a European football (soccer) fan, having seen the way the different leagues in different countries are organized and run, in parallel as higher and lower leagues, it became apparent to me that this ideal could be taken and combined with America's love for "the playoffs."

College baseball plays a full season of series, both conference and non-conference, has a conference tournament, goes to a field of 64, has regionals, then Super Regionals, THEN finally the College World Series, but still with eight teams alive.  Do the math and you realize that college baseball teams end up playing nearly 65 or 70 games by season's end.  Obviously, this would not work in college football.  College basketball plays full non-conference and conference schedules, has a conference tournament, then narrows down to 65 teams, and then somebody has to win six more in a row to be crowned national champions.  Do the math on that one, and see that the winner plays right around 40 games a season.  Obviously, this would not work for college football, either.  So, what would work then?

Disclaimer:  This is completely theoretical and only one possible solution of many.  This is 100% my own work.

What I propose is a nationally reorganized "staggered flights-conference organizational system."  Now, go back and read that phrase again.  A nationally reorganized "staggered flights-conference organizational system."  You're thinking, "what in the world is that," right?  I will explain exactly what that means in a moment, but for the time being, gone are the SEC, Big 12, ACC, Pac 10, Big 10, etc. as we know them.  So, just erase those names from your mind.  This is where it gets really theoretical, so hold on tight.

There are 119 teams in Division 1 College Football.  Now, realistically speaking, about ten to fifteen teams have somewhere around a combined eighty percent chance of winning the national championship in a given season.  The other 100+ teams make up the other twenty-or-so percent.  I propose that the 119 teams in Division 1 be broken in two, yes, just two, separate "flights" (or levels) of division.  Not in half, but into 52 teams in the top "flight," with four "groups," all based on geography;  with the remaining 67 teams being placed in the bottom "flight," with four "groups", as well, also done so geographically.  Now, quick math says that the Top Flight (we are going to capitalize this from here on out, as it is the generic, unnamed title of the "flight," as well as the Bottom Flight) will have thirteen teams in each group.  An average Division 1 schedule is made up of either twelve or thirteen regular season games with a possible conference championship at the end (depending on conference) and then a bowl game.  In the proposed system, each team will face every team within their group once.  Twelve other teams in a group, twelve regular season games.  Six home, six away; as fair and level of a playing field as possible there.

What this system will do is give everybody in each group the exact same schedule to play out; (with the exception of home/away games) thus taking away the argument about how much Strength of Schedule should matter in the final BCS rankings.  (Although, at this point in time, the BCS computers will have been stripped and set ablaze on the steps of the NCAA Headquarters in Indianapolis.)  After the playing of the twelve game regular season schedules is concluded, (each team having two bye weeks - explained later) the top 2 teams from each group (after tiebreakers - explained later - if necessary) will determine the champion of the group.  This will be done right where a champion should be determined: on the field, of course, at a neutral pre-determined site, chosen geographically.  There are four groups, which means four group champions.  The four champions will then take part in the first ever NCAA Division 1 College Football "playoff"; a single elimination, lose-and-go-home tournament ending in one team being crowned undisputed national champions.  The remaining 44 teams will all play in the bowl games (explained later) that are currently existent.

The season will start the last Saturday in August, which will be the 29th this year.  Each team will have two bye weeks (explained later) throughout the season, much like most teams do currently.  The bye weeks will be spaced out with six weeks in between each bye week for each team, beginning the second week of the season.

For the Bottom Flight, the 67 teams will be broken up into four groups, as well, all corresponding geographically with the Top Flight Groups.  Having an obscure number of teams, there will be three groups of seventeen, and one group one sixteen.  Obviously, teams in the Bottom Flight will not play sixteen game schedules just to play everybody in their group.  Bottom Flight teams will play twelve game schedules, just as the Top Flight teams will.  Also, just as in the Top Flight, the top two teams in each group at the end of the regular season will play for the group championship.  The four winners will also go on and play for the Bottom Flight Championship.  With twenty more teams being awarded bowl games that are also currently existent, with the exception of one.

In this system, there are no more controversies over which two teams get to play for the title, no more lobbying from coaches to pollsters for votes, no more Top-Secret BCS math formulas, no more wondering "what if" at the end of the season.  All of that is a thing of the past.  Each team is given the same exact equal opportunity against the same competition.  Where they end up at the end of the season depends on how they perform on the field.  Clear guidelines are set, and you go into the season and every game knowing exactly what you have to do and how far you must push yourself to reach your team's goal. 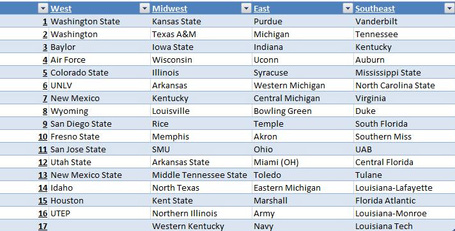 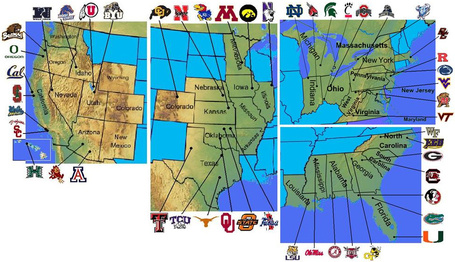 There will be no mid-week scheduling in the Bottom Flight as there will be in the Top Flight.  There is simply not enough time in a weekday evening to air up to four games on television. 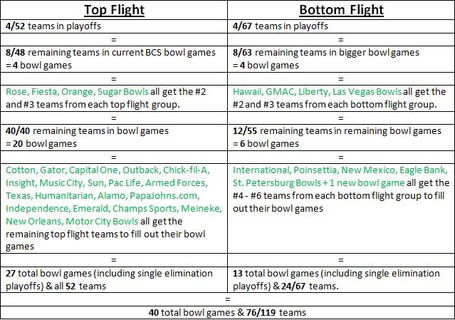 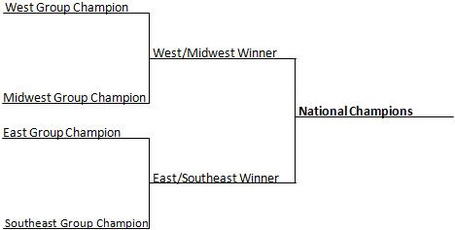 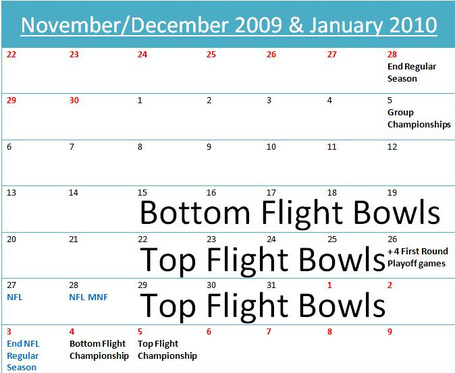 In the event of a tie between two or more teams, where a tie being broken within the group is necessary at the end of the season, the following list of tiebreakers will be used:

1.  Head to head matchups among the three teams

+ If Teams A, B and C are all tied, if Team A beat both B and C, with their loss(es) coming against other opponents, Team A is the victor of the tiebreaker.

2.  Total point differential in head to head matchups amongst the tied teams

If only two teams are still tied after tiebreaker two, it does NOT revert back to head to head between the two teams.  It continues on to tiebreaker three.

3.  Record vs. Top 6 in the final group standings

4.  Overall record in games played away from home

5.  Overall point differential in all games

+ Same formula as used in tiebreaker two, extrapolated over the full season.

With everybody playing the same exact schedule, with the exception of themselves, total point differential is a level barometer of how well they played within the group, how big they won by and how badly they lost.

The point of the relegation and promotion is to enforce an "earn your right to play for a championship" attitude.  By promoting and relegating two teams from every group nationwide, both Top and Bottom Flight, there will be "new blood" in each group every year and offer different matchups, similar to the non-conference play portion of team's current schedules; but these "non-conference" games, in essence, matter just as much as the "conference" games of the current format, because every single game goes towards a group championship, and a possible national championship run.

Now that you have taken probably half an hour out of your life that you will never get back to read this, I'm sure you have a million different reasons this would not work, so let me have it.  Obviously, there are some things that could probably be tweeked slightly to make it even better, but who are we kidding; this is flawless logic.

Now that I have completed this epic post, done so so thoroughly and put so much effort, research, time and thought into it, I can honestly say this is the funnest thing I have ever worked on.  I felt as if I ran College Football in presenting this theory and enjoyed it tremendously.

As you may either know or tell, I am a KU fan down to the bone and you may notice that I left Missouri off of the Regional Maps, but this was purely and honestly an accident.  I do hate the Tiggers, but in a post that I took as serious as this, I would not leave them off of it.