Should you come out to the game?  Of course.  By baseball standards this rivalry is ancient.  The two teams met for the first time on April 23, 1886.  The game ended in a 6-6 tie, which sadly was the highlight of Kansas’ 0-3-1 season that year.  KU responded to the humiliation of a winless season by putting together a juggernaut of a team two years later and the Jayhawks blew Baker away 25-13.  Since that time the series has been dominated by KU 62-9-1 but Baker pulled a shocking 7-4 upset on April 8, 2003.  That was the last time KU lost to a non- NCAA D-I opponent.  Admission to the Tuesday night game is free and the weather looks great. You’ll probably be surprised how many fans come to this game each year.

The following night, Wednesday April 22nd, Kansas and Missouri will square off at Kauffman Stadium.  First pitch for this non-conference game will be at 7PM.  This is the second year this Border Showdown event has been held.  Last year the game attracted such a large crowd (3,847) that the few open Kauffman venders were overwhelmed and fans had to stand in concession line for over half an hour.  Shaeffer Hall pitched brilliantly and KU upset the Tigers 3-0.  I expect another nice crowd to turn out this year.  Link here for ticket information. 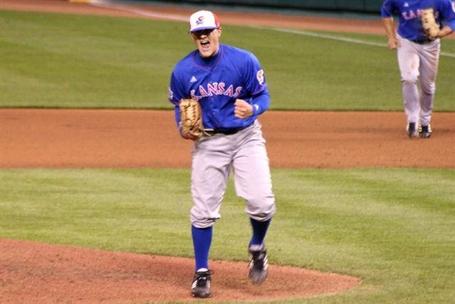 After the jump, KU’s national ranking, Nick Faunce nominated for Senior CLASS award and a nice profile of Robby Price.

Kansas dropped out of Baseball America’s top-25 this week.  Last week the Jayhawks were #24, and it looks like they would now be #29 if the list went that deep.  Kansas went 2-2 last week, which was somewhat disappointing.  However it is not hard to put a more optimistic spin on the outcome.  All four games were on the road.  Kansas started the year 1-7 in away games and are now 5-9.  Creighton is 14-4 at home, Texas Tech 11-5.  So splitting these four games probably should not feel quite so disappointing.

Nick Faunce has been named a finalist for the Senior CLASS Award, which is quite an honor.  You can support Nick by voting for him.  I’ll copy part of the KU press release below with the voting link.

LAWRENCE, Kan. – Kansas senior captain Nick Faunce has been named one of 10 finalists for the Lowe’s Senior CLASS Award, which honors the nation’s most outstanding senior student-athlete in Division I baseball.

Nationwide balloting begins immediately to determine the third annual winner, who will receive the award from Lowe's, an Official Corporate Sponsor of the NCAA, during the NCAA Men's College World Series this June in Omaha, Neb.

Faunce, a senior outfielder from Eugene, Ore., is currently batting .264 this season with eight doubles, two homers and 23 RBIs. He has a pair of outfield assists this season and has scored 15 runs. Faunce has also been phenomenal in the classroom, boasting a cumulative GPA over 3.6 in biochemistry. He is also a big part of the Student-Athlete Advisory Committee at Kansas.

The 10 finalists were chosen by a media committee from a list of 30 candidates based on qualities that define a complete student-athlete: classroom work, community involvement, character and competition.

The 10 players selected as finalists will be places on the Lowe’s Senior CLASS Award baseball ballot for a nationwide vote beginning today and concluding May 31. Fan balloting, available on the award’s official website: www.seniorclassaward.com, will be combined with votes from coaches, media and sponsors to determine the recipient of the award.

The Big-12 homepage published a nice profile of Robby Price a few weeks back.  I didn’t  notice it until this weekend.  It’s worth checking out.  The Price’s sound like a very close family.