Price and Brunansky star as Kansas takes down Creighton in Omaha 7-6.

Share All sharing options for: Price and Brunansky star as Kansas takes down Creighton in Omaha 7-6.

Kansas (24-12) picked up a nice road win last night at Creighton (17-17).  Brett Bollman gave the Hawks yet another quality start and allowed the team to build a 5-1 lead after six innings.  Most of the Kansas runs came from a 3-run Jason Brunanaky blast to centerfield.  Let me pause you here to emphasis that this home run was a “blast.”  Brunanaksy has some pop.

Uncharacteristically the KU infield defense collapsed in the 7th inning allowing the Blue Jays to get back into the game.  With two outs a Colton Murray error kept the inning alive and opened up a flood gate of baseball slop.  If you were scoring along the next five plays read: E1, E6, Passed Ball, BB and finally a HBP with the bases loaded.  With the score now 5-4 Travis Blankenship came in and struck out T. J. Roemmich to finally end the bleeding.  Kansas stretched the lead to 6-4 in the top of the eighth on a Zac Elgie single.  Creighton responded by scoring two runs in the bottom of the eighth and the game went into extra innings at 6-6.  All six Creighton runs were scored with two outs.

Casey Lytle, Preston Land, Jason Brunansky and Robby Price combined small ball contributions to manufacture a run in the top of the 10th inning.  Brett Bochy made this lead stand up in the bottom of the frame and earned his third victory.  Robby Price has been outstanding lately, outstanding across the spectrum.  Last night’s game was Robby in microcosm.  Price made three great defensive plays, he went 2-3 at the plate with a triple, drew a walk and drove home the go ahead run with a 10th inning sac fly.  On paper Robby looks like an average ball player.  When you watch him every week you know better.  Robby Price is the Mark Grudzielanek of college ball.

More notes and pictures from the game as well as the box score after the jump.

Ask Coach Price: It’s about time to gather up another group of questions for Coach Price.  If you have a question just post it below or e-mail it to jqku at hotmail.  I’ll send them to Coach Price and post his replies early next week.

Baseball Alumni Weekend: Each year KU baseball hosts an alumni weekend.  It’s a great time to see former players at Hoglund (or monopolizing Lawrence’s golf courses prior to game time.)  The annual event will be held next weekend when Kansas hosts Nebraska.  If you’ve been following the team for 20 years or two months this is a great weekend to soak up a bit of history.  Kansas has been playing hardball since 1880, there is no shortage of tradition in the program.

Brian Heere drew two more walks yesterday.  He leads the team with 26 walks, as opposed to 18 strikeouts in 139 plate appearances.   Heere is having a great year but is not in any danger of breaking KU records.  Tony Thompson is another story.  The school record for RBI’s by a sophomore is 62 set in 1991 by Jeff Niemeier.  Thompson has 44 through 36 games.  This put him on pace to collect 68 which would be the third highest total in Kansas history.  The all-time KU single season record for RBIs?  Answer at the bottom of this story.

Brett Bollman has been consistantly effective in 2009.  After last night his ERA stands a 1.71 in 26.1 innings of work.  He has struck out 20 and walked only three.  Last year Bollman had a 5.83 ERA in 24 relief appearances.  That year he walked 20 and struck out 32 in 29.1 innings.  I don’t know if the reason behind Bollman’s transformation is skills development or being better suited to longer outings but clearly something is going right with him this year.  Brett Bochy has a much higher ERA than Bollman but is also pitching much better this year.  More specifically, Bochy is striking everyone out.  Last year he struck out 18 in 16.2 innings, which was impressive.  This year he is absolutely filthy in the department.  Bochy has 28 punch outs in 18.2 innings.  By my calculations that is a 33% K rate.

There was a lot of chatter on the internet last night during the televised game.  The open thread here at Rock Chalk Talk was a surprise to me when I got home after the game.  There was also an open thread at KUSports.com that grew to over 150 entries.  It is a shame more KU baseball games are not televised.  There appears to be an audience.  Oldwater, a contributor at KUSports.com, was at the game.  He posted afterwards that the crowd (announced at 1,159) was about evenly split between KU and Creighton fans.  Kansas has recruited heavily up north so this was not terribly surprising.

I’ll pass along a few more photos I received from from a fan. 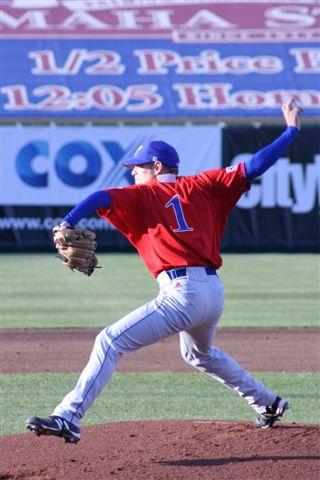 Brett Bochy got the win yesterday by working the final 2.1 innings.  He moved to 3-0 on the season.  Bochy struck out 3 of the 11 batters he faced, a percentage actually below his season average! 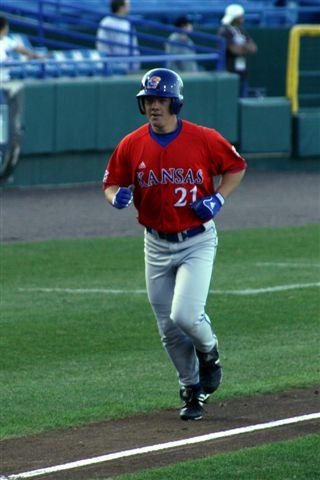 Brunansky's homerun trot.  A sight I hope we get used to over the next three years. 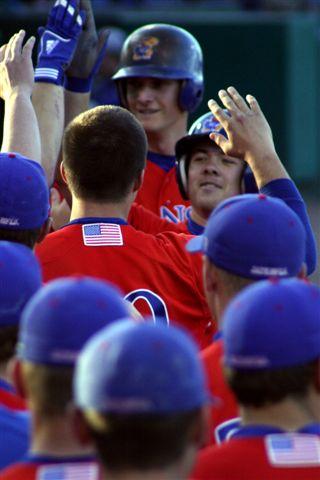