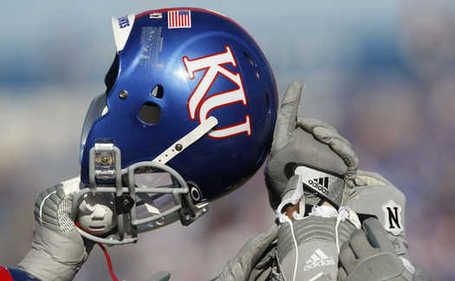 Spring practices are under way for the football Jayhawks in Lawrence.  Amid the cheers of March Madness, Mark Mangino and company will take to the practice fields for a month of practices that will set the stage for summer workouts and fall training camp.

Over the next two weeks here at Rock Chalk Talk we'll take a look at the team units and the players competing on the field.  Again with plenty of basketball action going on around us Monday afternoon seems like a good day to step outside the hardwood and look to the gridiron.  Next week look for discussion on the defense.  Question marks at linebacker, who will make an impact in the backfield? Finally, will the defensive line take the step forward we're all hoping for?

This week though, we're talking offense.  Todd Reesing's senior campaign will be highly anticipated.  The big questions on offense are how will the coaching staff rebuild the offensive line in a significant way for the third year in a row?  Also, will we see any new faces emerge in the backfield to compliment Jake Sharp? and with Dezmon Briscoe and Kerry Meier the known commodities in the recieving corps, will anyone else step up?

Full offensive preview after the jump...

On the offensive side of the ball there is one spot on the field that in terms of any spring excitement seems fairly uninteresting.  That spot is quarterback and not because we don't have a good one in tow but because there is absolutely zero doubt that Todd Reesing will be pulling the trigger come fall of 2009.

Career totals of 7578 yards and 68 touchdowns place Reesing at the top of Kansas' record books with a season still to add to the books.

Despite the relative security here there should still be reason for interest in this position going into spring practice.

In the spring press conference Coach Mangino stopped short of assuring a move by Kerry Meier to full time receiver.  His statement was along the lines that they weren't quite ready to completely remove him from the backup QB roll but the hope was they could after spring practices.

That's where the interest lies.  Can Kale Pick, last years offensive scout team player of the year establish himself as the clear cut #2.  After a redshirt season the 6'2" 200 pound Dodge City product will look to emerge as the early favorite at QB2 and potential successor to Reesing in 2010.  Another name that will join the position in spring ball is that of Jordan Webb a freshman next year who comes to Kansas after early graduation in December of 2008.

The importance of spring practice at this position is simply establish a clear #2 allowing Meier to move to receiver full time and allowing the Jayhawks to begin getting repetitions to their quarterback of the future.

So from the most secure to the least secure the offensive line is a unit that will see a lot of change in 2009 just as it did in the past two seasons as well.  The difference this year is there will be little experience anywhere on the line.

Jeremiah Hatch and Jeff Spikes come in as redshirt sophomores and the most experienced players that will see the field this year.

Spikes looks to be settling in at the right tackle spot, while a move back to his more natural position on the interior seems to be in order for Hatch.

That leaves three spots up in the air and hints on a few came out of the Spring Press conference last week.

Tanner Hawkinson a redshirt freshman from McPherson Kansas has made the move to left tackle.  Hawkinson is a young kid with a big frame and good feet.  I do love this move for the future but it is going to be interesting to see if he can truly make the switch and be ready come fall.  I wouldn't rule out a move by Hatch, Spikes or even Ben Lueken to give this spot more experience by the start of the season.  Ian Wolfe is another wild card in this battle as the Junior from Fort Collins Colorado has yet to break the lineup at Kansas despite coming in as highly touted recruit.

Inside that also leaves the two guard spots up in the air with no shortage of candidates.  One would be careless to disregard Sal Capra as a potential starter in this role.  The junior has turned from a linebacker recruit out of Rockhurst to a formidable contributor on the line.  Late season 2008 he was filling in for Chet Hartley and seeing nearly as much of the field as the starter and doing it well.

Another upperclassman name that I think finds it's way on the field is that of Brad Thorson.  Thorson is a transfer from Wisconsin where he was the backup center there as a redshirt freshman and will be a junior this season at Kansas.  I look for him to be in the mix at guard of even center depending on how the moves at left tackle pan out.

Also in the mix are a pair redshirt freshman John Williams and Trevor Marrongelli.  Williams is a big kid that many are excited about checking in at a stout 338.  Marrongelli is a little more of a wild card but he came to Kansas with a reputation of having a mean streak and that certainly doesn't hurt your chances of battling on the interior.

Coach also hinted at the strong possibility of moving Leuken to the interior should the other moves play out as well.  I think if Mangino and Reagan have it work the way they want this will be the case.  My hope for the line is this.

That may be wishful thinking but I like it because it gives us three full seasons with a big, strong group up front.  My realistic expectation for opening day looks like this.

Left tackle is just too important a position to be up in the air and we'll know much more after spring ball and early fall but for now I'm working under the assumption that it will take Hawkinson a little more time to get comfortable.

Well we know this much.  Kerry Meier and Dezmon Briscoe will be two of the top receivers in the league if not the country.  So who else will Todd Reesing look to get the ball to with the increased attention those two will draw?

Johnathan Wilson showed flashes in early 2008 and I expect him to be an improved target for the 2009 season.  He'll be a junior this year and with a solid season can position himself as a leader of this unit for 2010.

Rod Harris a junior college transfer out of Blinn CC in Texas drew a lot of praise during his red shirt season last year and I think he'll be a contender for minutes and could also be a bright spot in the future.

Two upperclassman that could make their way onto the field would be Tetravian Ingram and Raimond Pendleton.  Ingram saw some time last year after the Patterson move to defense but has never clearly established himself in the lineup.  Pendleton's story is much the same but both have ability to see minutes and I never count out experience in football.

Also don't be suprised to see on of the three incoming freshman of Erick McGriff, Chris Omigie and Bradley McDougald see the field at some point.  These three are probably the most talented group brought in for this position, now they just have to prove it on the field.

Tim Biere will be the lead candidate at tight end after he had an excellent true freshman campaign and should we be breaking in a new left tackle I look for a lot of Biere in a blocking role.  Biere could also very easily become very Derek Finesque in his years at Kansas as he's up to a solid 245 and showed good hands in traffic last year in limited catches.

Bradley Dedeaux is another guy that I could see getting minutes at tight end primarily in a blocking role but as a junior now Bradley has played primarily special teams but will likely be in the mix this season as the #2.

The wild card at tight end is AJ Steward.  The athlete out of St. Louis made the move from quarterback last year and has the size and athleticism to fill in the role of a split tight end.  More recieving focused and a guy that will create mismatches with opposing defenses.

Well for the first time coach Mangino seems pretty comfortable in saying that Jake Sharp is the guy at running back.  The Salina senior earned it by stepping into the role in 2008 and giving a rocky position some stability.

Others in the mix will be Jocques Crawford who met 2008 with high expectations and hopefully he can meet some of the potential in 2009.  Rell Lewis is a wild card as the sophomore has yet to see the field but has at times generated some excitement within the program.

Drew Dudley has moved from linebacker to the fullback spot and honestly I don't know what to make of this move since we rarely use a fullback and I can't imagine a guy switching as a junior and jumping into a McAnderson role.

Incoming freshman Deshaun Sands and Toben Opurum could also contend for minutes behind sharp.  Sands is already on campus so that is a huge benefit to his development as he should be up to speed already come fall.  Opurum is physically prepared as he is a big kid and from a mental standpoint his experience in the spread could make his transition a smooth one.

My hope here is Sharp takes control of this early and I also think Crawford might surprise us all a little bit this year.  If those two can provide a one-two punch we can keep the redshirts on Sands and Opurum and those two will have four years to impact the backfield at Kansas in a big way.

All said and done here is what I think the two deep looks like going into spring ball.  We'll take a look at it on the back end as well.  Keep in mind this one is the ideal and what I hope we come out looking like. This is probably somewhat wishful thinking especially on the line, but again we'll reevaluate it after practices.  Think of this like your tourney bracket you fill out that always has KU winning it all.