Share All sharing options for: Statistical Rearview: Kansas vs Texas 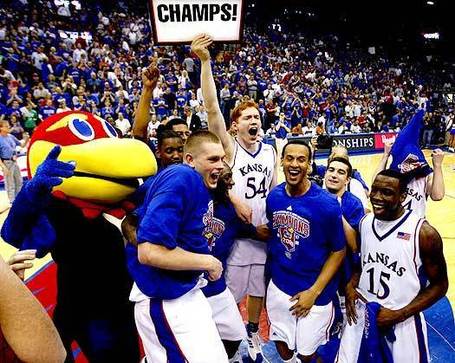 Sure it was technically already clinched but who really likes to share?  Kansas Jayhawks are 2009 Big 12 conference champions completing their 5th straight season of being able to claim such a feat.

There were times it didn't look like we were going to be able to finish on a high note but in the end Sherron and Tyshawn didn't let us lose.  Kansas beats Texas, Kansas wins the Big 12 and on to the tourney we go.

As far as gameflow this was a close one to the end.  It had the feeling of the Texas Tech game in that we didn't look like we were ever going to make it over the hump but as predicted by several in the open game thread, once we did, we kept it.

Full Breakdown and More Stats after the jump...

In terms of keys to the game this team finally seems to be handling business in terms of taking care of the ball.  We shot well, got to the line and avoided the excessive turnover bug.  What we didn't do and it was a headache all day long was control the boards.  Fortunately late in the game we did start to get to the glass and keep Texas from 2nd chance points.

Player impact is about as balanced as we've seen.  Sherron get's his and Cole eventually became the man in charge on the boards.  Still everyone from Brady Morningstar to Tyshawn Taylor and the Morris twins made a difference in this one at some point in the game.

Team stats show what we all hoped would happen and that's the Longhorns coming back down to earth in shooting after a first half that saw a 57% shooting performance.  Two other things I like to see...only 10 turnovers by the Hawks and 17 assists to go along with it.  A lot of hands played a role today in the comeback and the win.

In terms of individual performances, Cole, Sherron and Tyshawn standout.  The Morris Twins despite some foul troubles had a solid line and were certainly crucial in stretches.  Releford and Little deserve mention for being productive in their minutes especially Releford who was a big part of our erasing that deficit late in the 1st half and early in the 2nd.  Lastly a stat that won't show up is Brady Morningstar who shutdown AJ Abrams for the majority of the game.  If he's hot as well I'm not sure we ever get back in this one.

Short and sweet on the rearview today.  I've got some celebrating to do tonight.  Another regular season is gone and I can't even believe it's over.  I certainly can't believe we won the Big 12 outright either.  Great regular season, kudos to Coach Self, Sherron Collins and the rest of the team who have been an absolute joy to watch.  On to the Big 12 tourney starting this Thursday for the Jayhawks and don't look now but there is another potential matchup with the purple kitties to the west next Friday.