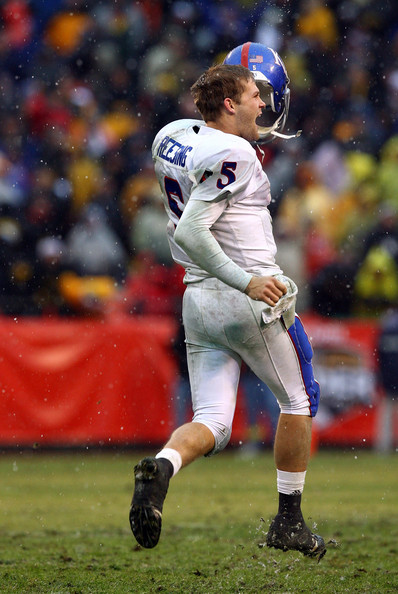 Believe it or not it's football time again...well at least spring football time.  Over the next few weeks and leading up to the spring game on April 11th the team will be conducting practices both public and private and putting in the work to set the table for a productive summer and fall.

Spring provides a time where a lot of questions can be answered and it provides an opportunity for both new and old to shake off the rust and make a case for more playing time.  Over the next week we'll take a look at the offense as well as the defense and anything else you all want to discuss.  Obviously we'll be squeezing this in during March Madness but we'll also be covering important tidbits from spring ball as well maybe with weekly updates or something of the sort.

If there is anything you all would like to see or have questions on feel free to make comments, suggestions etc. and we'll do our best.

Tomorrow we'll have a recap of coach Mangino's press conference to kick things off but for today I just want to give you the date's and some general info on the team and what to expect over the next month and starting early next week we'll take a look at the players and more in depth previews.

jump into the post for Spring Football Summary and dates...

First off the schedule of events and if you’re fortunate enough to make it to any of the open practices or the spring game I encourage you to do so.  These guys go to hell and back to put the product on the field that we’ve recently grown accustomed to and the least we can do is show we appreciate it.  If you can, please do.

There were a handful of changes and promotions on the staff this offseason so as a recap here’s a look at the 2009 Kansas Football Coaching staff.

A look at what we lost and what we return simply from a number standpoint and nothing else.

KANSAS NOTABLES -- Here are a few notes heading into the 2009 season:

Kansas has won 16 of its last 18 non-conference games, including two bowl victories.

Four of KU’s five losses in 2008 were to ranked teams, including three games to teams ranked in the top eight at kickoff.

KU won 11 Big 12 Conference games in the last two seasons combined, a total the Jayhawks had recorded in the previous five years combined.

• RB Jake Sharp has rushed for at least 800 yards in consecutive seasons despite not being a full-time starter in either season.

We’ll dive in deeper into the players and what to look for in the offensive and defensive previews early this week with some weekly updates as practices go on.  That’s all for now.