It's Time for Football

Share All sharing options for: It's Time for Football 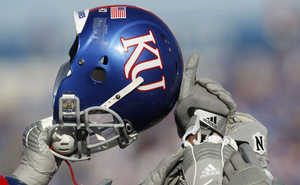 As KC kindly pointed out last night the Kansas Jayhawks loss in the Sweet 16 has ushered in Football. With spring practice in full swing my intention is to complete the second part of the preview series concluding with the defense for either tomorrow or Wednesday.

That said I thought maybe you guys could use a little something to get you back in the mood  so without further ado, enjoy some of free video coverage of Jayhawk football spring drills as well as a couple of interviews with Coach Mangino and Kerry Meier.

Due to weather the Jayhawks have yet to be able to hold an open practice but they did allow media on the scene last week and the guys over at rivals got some decent footage and got a recorder in on some of the interviews going on that day.

First up here's a look at the running backs going through drills.  Looks like we've got Sharp, Crawford and Rell Lewis running as the primary guys here.  Two quick observations...Rell Lewis is a pretty powerful looking guy and second it's good to see Deshaun out there already #36.


Running back drills @ Rivals Video
Up next O-Line v D-Line and while I'm not sure who's who the D-Line seems to be getting the better here.  Most of all though it's just good to see some live action.

Lineman Drills @ Rivals Video
Some offensive passing and Defensive pursuit drills and I put this one up so you can see who's running at the different spots on defense.  The first group out and the third is the first team and you'll notice it's a two LB set with Arist Wright and Steven Johnson at the LB spots.  Your DB's are as expected Stuckey, Thornton, Patterson, Strozier and Harris at the Nickel.  D-Line was Laptad, Onyegbule, Richard Johnson and #98 is Zlatnik (looks like a pretty big kid coming at you in the camera).

Offense and defense drills @ Rivals Video
These last three are interviews, one with coach Mangino and one with Kerry Meier.  I think the most interesting thing at this point is the discussion about the defensive line both Hawkinson and the interior.  The right tackle spot isn't talked about but I do think that is an ongoing battle as well.

Kerry Meier focuses on receiver @ Rivals Video
Like I said some of you all may have seen this stuff already but it's definitely fun to watch and start think about fall, even if you're a baseball fan.