The Anatomy of a Winner

Share All sharing options for: The Anatomy of a Winner

Once again it's time for March madness and this week has certainly brought it's share of insecurities about the Jayhawks chances in this 2009 version of the big dance, but it's time to get it fired up around here with a little reminder of what we've all witnessed in 2009. 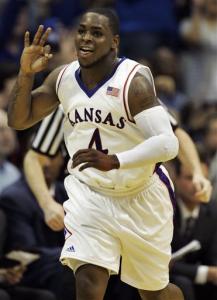 Let me start by saying that obviously memories of the 2008 tourney run are still  strong in the hearts of Kansas fans but to me a new story tugs as the 2009 season winds to the conclusion.   Long gone are the seniors Russell Robinson, Darnell Jackson, and Sasha Kaun, the three grew up before the eyes of fans and emerged champions.  Gone is the Rush brother who finally called Kansas home.  Gone is Darrell Arthur who came to Kansas because of a dream.  Gone too is a Mario some call super after a shot heard round the world or at least around Jayhawk nation.

Left with a shell of the team that brought Kansas its first Championship in 20 years it would have been easy and even acceptable to take a step back this season.   With what I hope is a few more games still to be played though it's already apparent that wasn't the case.  One Coach and one player refused to let it happen, refused to accept anything but the best from anyone wearing a Kansas uniform and refused to relinquish the Big 12 regular season crown.

A mere cog in the wheel in the 2008 Kansas championship run Sherron Collins had always shown flashes of being the type of explosive player he has become.  There was that steal on the sideline and subsequent three against Memphis and the calm, cool and collected sophomore who marched the ball up the court dishing to Mario Chalmers for the game tying three.  Flashes of leadership that while very telling were far from defining.  However, this year it could be said that he is not only the wheel but he might even be the man behind the wheel.

Coach Self has made no secret from day one that this was Sherron's team.  Sherron had earned his coaches trust through the ups and downs of a freshman season and as a major piece to a national crown in his sophomore campaign.  The response has been more than many could've asked.  Statements like "that's what we do at Kansas, we win," or "we were tired of losing," are comments that tell the tale of where Sherron set the bar for this team and how he expected this team to perform.  Sure there are times where he might try to do to much but the important thing here is that Coach Self challenged Sherron and Sherron challenged everyone else.

How easy it would have been to resign to the fact that Kansas wasn't going to be Kansas this year.  How easy it would have been to go out and "get his" and use this season as an audition for the NBA.  I guess now we know why Coach Self trusted Collins.  Sherron not only took it upon himself to lead this team, he brought these young guys along better than anyone could have hoped and in the process did do a pretty fine job of making his case for the NBA.  Will he stay or go?  Time will tell, but one thing time has told us is that Sherron Collins is a pretty damn good Jayhawk.  Sherron Collins can be the cog or the wheel.  Sherron Collins is flat out a winner and Sherron Collins made the rest of the Big 12 wonder how Kansas did it.

How do you make a name for yourself at the University of Kansas one year removed from a team full of great Jayhawks and a year full of memories?  Quite simply you go out and act as if the expectations never changed.  You play as if you were born to win and you do just that, you win.  Sherron Collins has led the Jayhawks to their 5thstraight Big 12 conference title this year and truth be told it's one of the most gratifying for me as a fan.  We've watched this team and this player grow into something that reminds us Kansas basketball is special in a year where we didn't need a reminder.  Where does that kind of reminder come from, it comes from watching a winner and the last three years we've watched one of the best sometimes without even knowing.

Tomorrow with the start of the tournament another chapter starts for Sherron and while certainly all or our expectations might be lowered for this teams final result.  My bet is that Sherron hasn't lowered his and no matter where this run ends short of another final four or national title he won't be satisfied with the result.  Do I think it will happen?  I can't say I do, but I'm going to give the bowling ball from Chicagoland the benefit of the doubt on this one and let myself believe in this team all the while remembering it's sometimes about the journey more than the destination.