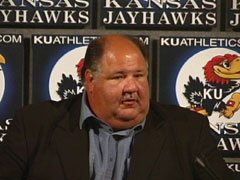 Today Kansas signed 24 players to the class of 2009 recruiting class wrapping up a year of hard work by the coaching staff.  The results speak for themselves, a top 5 class in the Big 12, a close 2nd to Nebraska in the North and a top 30 class in the country.

Kansas Head Coach Mark Mangino held a press conference to discuss the class this afternoon and here are the highlights.

Opening Comments
"It is a class that is very talented as you know. I will tell you today what I have said every year that I have been at this podium for this press conference, that we think we have some talented kids, but you never know until they get on a Big 12 field what they are going to do. Based on our evaluations we feel very comfortable with the group that we have."

"We met all of our needs for the most part... Four of the players are here already (Calvin Rubles, Deshaun Sands, Jordan Webbg and Kevin Young) and are already participating in the winter workouts. As far as eligibility every player has already qualified except two and we anticipate that those two will qualify."

"On the offensive side of the ball we have some playmakers, kids who not only put up big statistics, but are athletic guys."

"The majority of our recruits came from the state of Texas with nine guys and then instate we had four. Kansas is a high priority and we will recruit aggressively in the state. We did pretty good. We always feel like we could do better, but did pretty good. We did well in Texas."

On the Quarterbacks
"Jordan Webb and Christian Matthews are two outstanding quarterbacks to bring into the program. Both throw the ball very well, both are very intelligent and both can beat you with their feet. They are quick kids. We wanted to continue to recruit well at quarterback as our number one and number two quarterbacks are heading into their senior season. We got quality at that position."

On the Wide Receivers
"Bradley McDougald is penciled in at inside wide receiver. He is very talented, has good range, runs well, very athletic. Erick McGriff is an outstanding athlete and is a good addition to our group and will develop into a good player. Chris Omigie is a big, tall, rangy guy, kind of what you like in a wide receiver these days. Good size, good range and very good hands."

On the Offensive Linemen
"I like what we have on the offensive line. Gavin Howard is a good looking kid. We also have Tom Mabry, who is a big, strong, tough kid. A very athletic kid. He is going to be a good player and a good addition. Riley Spencer is a raw guy who looked really good in our summer camp last year and we decided to offer him. He is a 6-6 guy who is going to be 310, 320 before it is all over with."

On the Running Backs
"You know about Deshaun Sands. Toben Opurum is the big, strong running back that we have been looking for. He not only has speed and agility and great vision, but he has the power to go along with it."

On the Secondary
"D.J. Beshears is a very good athlete. We have him listed at corner, but he is good enough to play wide receiver if we needed him to. He is a very quick guy and good change of direction guy. Prinz Kande, Darian Kelly and Dexter Linton are all outstanding safeties. Once again they meet that criteria. They are athletic, they change direction, they are physical players and outstanding tacklers. At cornerback we have Calvin Rubles and Tyler Patmon."

On the Defensive Line
"We believe we have helped ourselves tremendously. With Quintin Woods and Kevin Young at defensive end, we have guys that can play the run and rush the passer. Quintin Woods is a guy, I am not going to make any comparisons to him yet, but his frame reminds you a little bit of (former Jayhawk) Charlton Keith. He comes off the ball with quickness and is an outstanding player. Tyrone Sellers is kind of an undersized kid from McCook, Neb. and we will get him in the weight room and he will be an outstanding player for us as well. Travis Stephens and Randall Dent, we think have the ability, if they are ready to go, to make an immediate impact on the defensive line as well."

On the Linebackers
"Huldon Tharp and Jacoby Thomas are outstanding young guys. Tharp is an in-state kid coming off a knee injury, but it won't have any affect on him. Thomas is an athletic guy. Played linebacker and played some defensive end. He will be a young guy that will develop in our program."