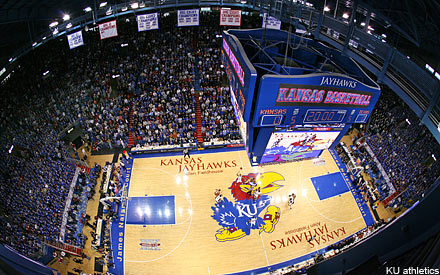 Time for a little reflection and time to move on.  Monday night clearly took the air out of this place and while none of us were expecting anything grand, it still seemed to put things back in perspective.  Flying high after the 8-0 start I think every Jayhawk fan began to dream.  Undefeated conference probably even crept into some minds although that in my mind is extremely tough to do.

We forgot for a moment that this is a team that lost the leadership of Darnell Jackson and Russel Robinson.  The defensive presense of Brandon Rush and Mario Chalmers.  The consistent inside play of Darrell Arthur and last but not least experience off the bench in Sasha Kaun.

This is a new team, an inexperienced team and a team that has a tremendous future. Sherron is driving the ship and while he is clearly the most experienced on our team he is certainly new to that role.  Cole is playing the game at a pace and for an amount of time he never even sniffed at last year...he'll get there.  As for the others, we've got six in a rotation of eight that had not seen a college court until this year.  Tyrel Reed is the closest thing to it and that was spot minutes in the non conference schedule of 2008.

Time is on our side with this group.  Yes the Morris twins are frustrating at times but no they aren't going anywhere and yes they will get better.  Danny Manning will most certainly have something to say about that.  Tyshawn Taylor experiences the same ups and downs of any freshman and Mario Little has and will never be 100% this year. Brady and Tyrel bring a year in the system to the table but all else aside these guys are best described as gritty determined players.

8-1 ain't bad.  The young Jayhawks are still 2nd in the Big 12 and still positioned for a shot at the Big 12 title.  Take care of business this weekend in Manhattan and we're back in the saddle.  Make no mistake though K-State won't be a gimme and neither will any game from this point forward.  Right now our team has a chance to define itself going forward.  Learn from the season, play with the intensity they've shown to be capable of and listen.  Listen to Bill Self and this group won't disappoint.

Time is on our side and so are a lot of other things, so it's time to get it fired up again and remember we're still Kansas.