A little over a month ago the Kansas athletic department opened up an investigation into the conduct of their then head football coach Mark Mangino.  Allegations of player abuse had surfaced stemming from an incident early in the season with senior linebacker Arist Wright.  While the exact circumstances of this incident aren't known entirely, stories did leak ranging from borderline inappropriate personal attacks, to physical punishment viewed by some as extreme.

Never however was Coach Mark Mangino accused of crossing the line and physically coming at a player during his tenure.  The "smoking gun" so to speak wasn't clearly defined.  What has followed though is a series of coaching accusations by players that seems to indicate a possible pandora's box opened up by the Jayhawk coaching situation.

The first incident involving another coach in the NCAA involved a former colleague of Mark Mangino in South Florida Head Coach Jim Leavitt.  Leavitt stood accused of striking a player during halftime of a game during the 2009 season.  At first glance this appeared a to be a pretty cut and dry case with physical abuse believed by almost anyone as over the line.  However a quick retraction by the player in question and Jim Leavitt appears to be in the clear.

Most recently Mike Leach, also a former colleague of Mangino, stands accused of locking a player in an "equipment shed" following a concussion.  With the investigation currently ongoing the full details aren't certain but again two camps pretty clearly stand divided on where the line is and if Leach crossed it.

Three coaches, three incidents in just over a month.  While Mangino's case was more a pattern of behavior than one single incident, did his investigation mark a watershed moment in college football? 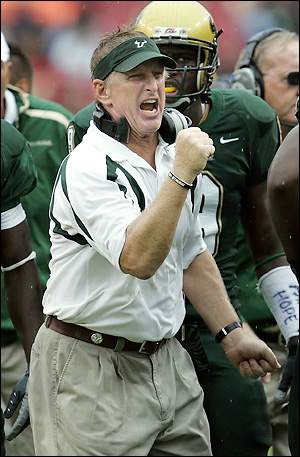 In 2002 ESPN produced a movie "The Junction Boys" essentially glamorizing the toughness and grit of a group of football players that "survived" Bear Bryants summer camp in 1954.  There likely isn't a football player out there that didn't relive his own horror stories of torment and trial associated with playing days of yesterday.  As amateur's, athletes are almost taught to expect it and persevere.  Obviously every level is different and times change but it still remains the culture of football that it is a man's game and one where toughness and discipline are highly admired traits.

On the flip side of this we live in a society that glamorizes athletes to an extreme.  NFL players command major dollars and the biggest names in the sport often have more power than the coaches that run the team.  In college, the students, alumni and boosters are constantly placing players on a pedestal or tearing them apart for their struggles.  The expectations are big and the reward for success bigger.  Even going back to the high school level, high caliber recruits are constantly having their egos stroked by some of the biggest named coaches and program in the country.  Imagine sitting in a living room with coaches from several BCS programs telling you how you are exactly what they need to take the team to the next level.

With that in mind is it really surprising that players are finding it hard to handle an over the top disciplinarian?  We glamorize the struggle on the one hand but then we put the player above the program in the very same breath.  Now that the floodgates have been opened it puts athletic directors across the country in a very interesting situation going forward.

As a hypothetical let's say recruit A sits in his living room with Missouri, Kansas, Texas Tech and Nebraska.  All good schools and often going head to head for similar recruits.  Recruit A gets told by each how he is what they look for, how he's has the potential to be a great player at his position and how School X is the best for him.  Final decision is made and off to school he goes.  Two years in, things aren't working out.  Recruit A feels slighted for one reason or another and due to a variety of circumstances has landed squarely in the coaches doghouse.  His family and friends back home wonder why he isn't playing.  He may even take a ribbing or two about his lack of success.  Now those other three schools not chosen look pretty good in retrospect.  Coach is the problem, coach has been out of line and now it's time to spill the beans.  Back someone into a corner and they are bound to find a way out one way or another.  It's tough to blame the player in this situation. 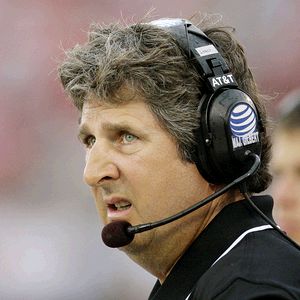 Glamorize the struggle, glamorize the athlete.  Is this one of the biggest contradictions out there?  The reason the "Junction Boys" and that philosophy worked is because the player was not the most important piece, the program was.  Is that no longer the case today?

It's an interesting situation in college football.  I'd have to think many people thought the Mark Mangino situation would expose a few skeletons over time, but to have 3 high profile coaches accused of player abuse in such a short time is a bit alarming.

Is this a situation completely determined by the success of the program?  Do the ends justify the means in most cases?  As I've mentioned it's hard to fault the players, but by the same token it's hard to fault the coaches.  Success is held at a premium.  Each side sets out to do what it must to be successful.

To date each of these three coaches have stood defiantly by their actions.  One ended up on the outs, while one appears to be remaining at his post.  As for the third we're still waiting to find out but a line in the sand has clearly been drawn.  Is it time to choose, glamorize the player...or glamorize the struggle, where is the priority?