Share All sharing options for: Q&A with California Golden Blogs

In preparation for tonight's game the guys over at California Golden Blogs asked if I would answer a few questions about KU basketball for their readers.  I naturally said yes because I'll take any opportunity I can to talk Kansas sports and it's even more fun when you have a basketball team as good as ours appears to be.

Thankfully in return California Golden Blogs was kind enough to answer a few questions about Cal.  Bears fans are excited about this one and in a year with higher expectations this is a chance for them to make a big statement if they can get the job done.  Without further ado let's get to the questions!!

What are the expectations for Cal coming into the season, tournament team, conference contender?

The expectations this year are at the very least tournament team.  This is for a few main reasons:

1.  Cal has a senior heavy team.  They have four senior starters: Theo Robertson, Jerome Randle, Patrick Christopher, and Jamal Boykin.  These guys have played together for years now and seem to have a really strong chemistry.  They made the tournament last year and lost very little.

2.  The Pac10 sucks!  It's true, it's true!  I don't know if it's bad recruiting, if it's losing everybody to the NBA (hellooooo, UCLA!) or if its just true that people west of the Mississippi can't play sports like they do over there in North Cackilacki!  But there are few good teams.  The #1 team, Washington, has already lost to Texas Tech and Georgetown.  And that's the best team!  The worse teams have a litany of losses to disastrously bad teams like Long Beach State and University of Illinois at Chicago (GO FLAMES!).  So, it's a wide open field this year.  Everybody seems down, so Cal might have a chance.  Only 2-3 teams will probably make it, so Cal's senior heavy team seems like a likely bet.

Once they get in, people would certainly like a National Championship.  However, they would be happy with a Sweet 16 berth.  We haven't been there since the late 90s.  And we haven't *won* a tournament game since the day the US invaded Iraq.  Fortunately, thats the second time.  Yes, not since March 2003!

It appears Cal has some senior leadership at the guard spot, how have those guys developed over their careers and what do they bring to the table this season?

Randle has really matured from his sophomore struggles under Ben Braun. He can drive, he can get quickly into the paint, he can  identify the incoming double team and pass to the open man, and of course you haven't really lived until you've seen him lace up an ICBM 3 pointer.  And he's approaching cooler status at the line, shooting 94% so far this year.

He does struggle if he gets stationary with the ball, and sometimes he might have to carry the load a little bit too much. But hopefully if everyone stays healthy he won't have to shoulder the burden like he did at the end of '08.

It's more of an up-and-down thing with Christopher. When he's playing aggressively and getting to the rim he shows all the NBA potential that scouts drool over, but during some games, especially on the road, he disappears. Some of that is due to circumstance (Robertson being out really hurts the way our team flows and functions), but I feel some of it is due to personal choice--he settles for jump shots and 3s, doesn't attack the glass, etc. I always worry about which Christopher will be lacing it up on the hardwood any given night.

Where do you see the Bears being able to give Kansas the most trouble?

A lot of it will depend on our dribble penetration and ball movement/player movement. Cal has had a tough road record, getting blown out of Coaches v Cancer and fell in a tough one in New Mexico, but all three look like top 25 teams (Syracuse, NM and Ohio State have a combined record of 29-2), so it's not the worst thing in the world.

Theo Robertson was out for all those games though, and he was critically missed--defenses keyed in on Jerome Randle and Patrick Christopher,  forced other guys to slash and shoot, and they couldn't deliver as consistently as Randle could. With Robertson you have three guys who can handle, drive, and shoot either on the move or from downtown, which could keep the game close if the Bears shoot lights out. If they don't, it'll just be another typical Jayhawk rout.

Cal always seems to have solid players funneling through but hasn't been able to get over the hump to consistency.  What's holding them back?

Former Coach Ben Braun?  I don't want to lay all our program's ills at the feet of a former coach, and one who did win plenty of games and with class, to boot, but it's hard not to notice that player development was less than stellar during his tenure.  Actually, even that's a bit unfair; Braun was great at turning marginally-talented walk-ons into Pac-10 caliber role-players.  What he and his staff consistently struggled with was turning already good players into great ones.  Leon Powe was just as beastly the day he was drafted as when he entered Cal.  DeVon Hardin had an NBA-ready body, was was unable to develop an NBA-ready game.  Amit Tamir was named to Playboy's preseason All-America team, and prompty regressed during his forgettable senior season.  Several other players you've never heard of came in highly touted but ended up having largely disappointing college careers.

Probably the most refreshing aspect of Coach Montgomery's tenure so far at Cal has been the improvement of the talent on the roster, turning good players into great ones.  This gives me hope for the future, something Cal fans aren't really used to feeling.

What's the feeling on Mike Montgomery as a coach?  Is he the guy that can do it?

I hope so!  Interestingly, Montgomery seems to be the opposite of our former coach, Ben Braun.  Ben Braun, who was not that personable from my personal interactions, was remarkably good at recruiting.  He could get great recruits, such as Ryan Anderson and Leon Powe.  But a lot of his players never seemed to develop.  Many players would regress over time, such as Israeli superstar Amit Tamir.

Monty, who is very funny and incredibly personable from my personal interactions, doesn't like to recruit as much.  But he seems a lot better at developing talent.  We get these unheralded guys, such as Max Zhang (from China) and Jorge Gutierrez (from Mexico), who impress with their development.  Zhang has definitely taken a step forward this year and Gutierrez is a "Gut-sy" (see what I did there!) player who scraps for everything.

Ultimately, having less heralded recruits who develop well is more exciting than bringing in big names who never seem to fulfill their potential.

What's your feeling on how this one plays out, Cal v Kansas?

Cal falls behind early but keeps battling.  At least one key player for the Bears gets into early foul trouble.  Cal comes out hot to start the second half, gets to within 4, then a combination of fatigue and foul trouble opens the door for a 13-2 Kansas run, effectively putting the game away.  The Bears keep it respectable down the stretch, but the Jayhawks are never really threatened after that.

Last question, Cal v Stanford is of course a big football rivalry.  Would you have preferred Kansas hire Jim Harbaugh away from the Cardinal instead of hiring Turner Gill?  Also you asked me who my punch in the face rival or player was...who's Cal's?

On one hand, Harbaugh brought success to Stanfurd, and anything that hurts the Cardinal is fine by me.  On the other hand, the 'Furd was SO bad over the previous five years before Harbaugh that, honestly, the rivalry was being hurt by the non-competitive, lopsided nature of the games.  Jim Harbaugh is an easy guy to hate as a rival fan, providing us with plenty of opportunities to make fun of him (seventy grand for a private bathroom?), and as long as his teams don't actually win too many games against my Bears, I'm happy with him at Stanfurd.

In fact, much as I would enjoy punching Harbaugh in the face, given only one face-punch, I'd have to go with former Stanfurd basketball player Casey Jacobsen.  Not only did that guy always kill us from outside, but he looked and played like an annoying little b***c (blonde highlights?  really?  what a douchebag). 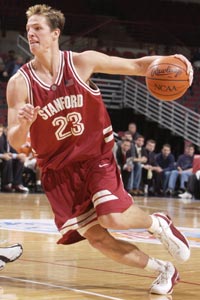 Oh and who's your favorite Bear of all time? got a favorite Jayhawk?

I'll admit, I'm a younger Bear fan, so guys like Jason Kidd are a little bit before my time.  Forced to choose a guy I actually saw play in a Bears uniform (and this is a tough choice), I'd have to go with Leon Powe.  Man, that guy was a beast.  If he got his hands on a rebound, that ball was his.  Perhaps undersized as a power forward, Powe made up for anything people said he couldn't do by outworking them.  Most of us weren't really surprised that he was unappreciated in the NBA draft, and none of us were surprised at all that he played a key role off the bench for the Celtics' world championship in 2008.

Favorite Jayhawk?  I've always admired Kansas' program from afar, but while the teams have always been great, I'm sad to say Kirk Hinrich is the only player whom I can name off the top of my head.  So it's Hinrich, I guess.