What do we Really Know???

Share All sharing options for: What do we Really Know??? 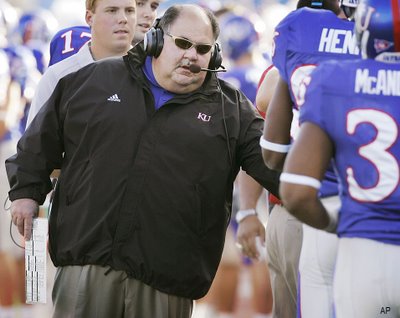 Yesterday Lew Perkins issued a statement making it known that Head Football Coach Mark Mangino is under investigation due to a player complaint.  Cue the rumor mill.  The newspapers, message boards, blog, radio and television stations quickly begin to churn out rumors of choking, punching, an all out mutiny of a man who clearly has no ethical standards and is finally getting what he deserves.  From Manhattan to Kansas City to Columbia and even in Lawrence Kansas the dirt was already being shoveled on the grave of the Mangino era of Kansas football.

Now I'm not sure where this ends up but I thought it would be nice to recap what we do know and what we don't know at this point.  In the end it may be determined that Mangino and Kansas need to part ways, but at the same time the awkward timing and release of the information has certainly led to a lot of misinformation and piling in on from all sides.  So here it goes...

Again I don't know where this thing ends up.  It could be determined that coach Mangino poked Wright in the chest and he get's reprimanded, told to tone it down and still coaches the Jayhawks.

It could be determined that coach Mangino has a larger pattern of some kind of abuse and he is asked to leave or forced to leave as the Kansas football coach.

Coach Mangino may see Lew's timing and disclosure as a slap in the face and decide to leave on his own accord.

Hell who knows.  All I do know is that for the moment Coach Mangino is the football coach at the University of Kansas.   For now, until some factual information comes to light I think I'll give him the benefit of the doubt.  However, if indeed Mark Mangino is guilty of some sort of overall pattern of abuse and misconduct then he should be gone.  I'm not saying the man is perfect, and based on past patterns it certainly warrants looking into if something is brought to the attention of the athletic department.  If however this is a simple poke in the chest, I'll be moving on.  Alas, today is a new day...let the rumor mill commence.