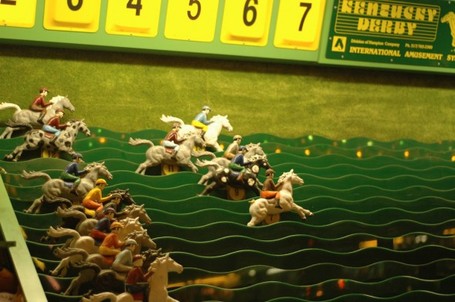 The three horse race for the North is off to a quick start after last nights fast and furious comeback by the Corn over the Tigers.  It's interesting perusing the web that the perception amongst Husker fans seems to be that they've all but secured the North and are well on their way to reclaiming their place atop the Big12 North for the rest of time.  Well, that might be an exaggeration, but there is no denying the fact that Husker fans appear extremely confident of at least winning the North this year.  Question is, are they right to do so?

We kicked it around in the open thread last night and the common perception is the Jayhawks would have seen a greater benefit had the Tigers won.  Missouri still plays Okie State, Texas and a game against Kansas, meaning Kansas could have controlled their own destiny in giving Missouri a potential third loss and winning the North if things played to the likely favorites.

Up in Lincoln, if the Huskers win the games they should be favored in they may only see losses to Oklahoma and Kansas in Lawrence if the Jayhawks pull that one out.  That puts them at 6-2.   So how confident are you that Kansas finishes 6-2 in the conference?  Kansas may control it's own destiny in theory against the Corn but it wouldn't be in the same fashion as they could have with Missouri.

Don't get me wrong it's early in this one and things change tremendously week to week in college football, but fact remains Nebraska likely took a stride ahead last night.   So what does everyone think?  Do Oklahoma and Texas Tech become absolutely huge games not for Kansas and winning one if not two essential to their North hopes?  Are we overestimating the Corn, will the high powered Big 12 offenses put up numbers in a game with decent weather and exploit their lack of offense?  Or, is Missouri still as dangerous as ever and last night was simply beat by a dominating defense meaning the Tigers still could very easily beat a team like Oklahoma State and Kansas to jump right back in this thing?

It's a three horse race, and just like in the carnival game...Kansas and Missouri are going to need to aim for that bulls eye after last night.