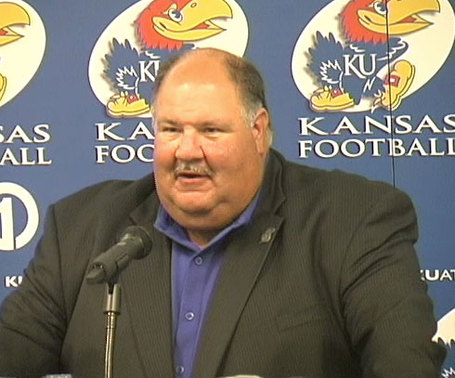 Coach Mangino talks Iowa State and Coach Paul Rhoads.  He also makes hints to the fact that Jake Sharp may in fact not play as he still hasn't hit the practice field at 100%.  Plus a couple of tidbits on how the bye week will be beneficial to the team.

On the player side of things, Darrell Stuckey, Justin Thornton, Kerry Meier, Brad Thorson and Tanner Hawkinson all weigh in on topics ranging from this weeks game, to the benefits of the bye week and even a little of what makes Coach Mangino's blood really boil on gameday.

Without further ado...notable quotables from this weeks Kansas football presser.

Opening comments on this week's game vs. Iowa State:

"This Saturday we host Iowa State, and as you know, last Saturday we did not have a game, so we used that time to work on some basic fundamentals. We worked to sharpen things up a bit. Toward the latter part of last week, we started our Iowa State preparation. Iowa State lost a very tough game against K-State last Saturday. After watching Iowa State on tape, we have found they are certainly a disciplined team in the way they approach things, which is a good way for a first-year head coach to approach his team. They do what their kids are capable of doing and play to the strengths of their talent base. I think they are an interesting team."

"They are sound fundamentally on defense. They are lined up where they are supposed to be, they play the ball well - run to the football. They have a couple defensive linemen who have played for a long time and are decent players, most notably No. 62, Nate Frere."

"On the offensive side of the ball, their quarterback [Austin Arnaud] is a very good athlete. He can throw the ball, as well as run it. They key is, you do not want him to get into a rhythm. They have shown they have a couple good running backs. One of whom was down for a portion of the game at Arrowhead, but he [Alexander Robinson] is expected to play this weekend and he is a very speedy guy. His back-up, named Jeremiah Schwartz, is a big, thick guy who weighs 230 pounds and is kind of a straight-ahead runner and powerful runner. They have a very big offensive line, physically. So, they present challenges for us, but we will be ready for those challenges."

On the advantage of the bye week for KU's young offensive line:

"You have a chance to assess where you are at with them; find the areas in which they are growing and developing and then the areas that they need to continue to work on. Rather than being rushed as coaches with the game plan and schematics, this week we had a chance to sit down and assess not only the schemes, but also the technical aspects of playing the game. It's really good for everyone, but especially the young kids because they get a chance to catch their breath and see what they did the first few weeks and where they need to improve as we move on."

"We have presented last year's game against Iowa State as ‘this is what happens when you show up and are not ready to play and not mentally sharp'. I think our kids prepare well every week, but they took some things for granted. That is what happens in college football when you take things for granted, you put yourself in a big hole. Now, our team showed a lot of character coming back in the second half. We played two totally different halves, but if don't show up ready to play, or you take your opponent for granted, you will get stunned. We were fortunate that our kids showed a lot of poise to come back in the second half."

On the second-half of last year's game vs Iowa State:

"Everybody did a good job of staying calm and poised. When you're down 20 points at the half, it doesn't do any good to kick the water bucket, so the coaches were not going to do that kind of stuff. We talked about trying to get the kids in the right frame of mind by staying positive. Technically on offense and defense, we asked ourselves ‘what can we do against them on offense and what do we need to do to stop them on defense?' The coaches went in the locker room and went over those changes. Then I gathered them [the team] up and said ‘listen, we deserve to be where we are right now, but we can change it. This is a good test of our courage and we will find out what kind of football team we are in this second half.' The kids stayed calm and the offensive coaches had a nice series set up for when we came out for the second half. We got a quick score with Jake [Sharp], then the defense held up, then we got another score and you could feel the tide turning. The kids never had a bit of panic. It was a terrible first half, but it was a good teaching moment for us at halftime, preparing for that second half."

On status of senior running back Jake Sharp:

"I think we all thought he would get on the practice field today and we would cut him loose, but unfortunately, it has not developed that way. I think by Thursday's practice, if he can go out and execute everything at full speed 100%, we will play him. However, if there is any sign that he is not 100% or that he cannot play to the best of his abilities, we will not play him. We will consider using him in a limited role, but, to be honest, someone would have to convince me that it is in his best interest. I want it where he can play the whole game or be a starter and maybe have a series off or take breaks here or there, but I want him to be completely functional. He is a guy whose speed and quickness are his assets, and if he doesn't bring those to the field, he is not a 240-pound running back, so we have to have him feeling really good."

On Coach Rhoads' transition into head coach at Iowa State:

"Years ago, I met him a couple of places and had some friends on the Pitt staff when he was there. He is highly respected, a hard-working guy and really has a good reputation. He is really smart, so I believe he will do well. From just watching the tapes, he is on the right track. He is doing the things that first-year coaches do when a program is down a little bit. You can tell he is teaching the right things."

On the things that make Coach Mangino upset;

"If we come out flat, if he feels like we are under estimating someone, or if we are not playing to the best of our abilities because we didn't prepare like we should have individually, not because of the schemes we had. He hates mental errors and lack of focus."

On how to keep your poise:

"Sometime you have to be honest with yourself. You have to look back and really analyze how you and your team have been playing. You have to see if they are beating us or if were beating ourselves. If you know it's because of missed tackles, because of this play here, or if there was a breakdown of communication you know they are not beating you."

"It was definitely a learning lesson. We can't find ourselves digging that deep of a hole, especially in Big 12 play. Teams are going to be ready to come out and play four quarters and that's what we are going to have to do."

Thoughts on the bye-week:

"It's definitely something to learn from. If an opponent gets up 20-0 on you at halftime, you've definitely got to realize that you've got to be focused going into every game, otherwise someone will sneak up on you and beat you. They're a decent team this year; they're in the Big 12. In this day in age anyone can beat anyone. As long as we come in focused, we should be fine on Saturday."

On keeping composure when down by a lot:

"It's tough.  It all comes with the leadership. We've got guys who have been in that situation before. All the guys who were in that situation last year, if something like that were to happen again we'd know how to handle ourselves. Experience helps and goes a long way in situations like that."

"I think it was a demonstration for us last year that we had a lot of talent and could win with our backs against the wall. It was a big test for us early in the season, but this is a different Iowa State team this year. They're still doing some things similar, they've got a lot of the same personnel. But they definitely have a different mentality this year so it's difficult to take a whole lot from that game and transfer it to this year."

"They're going to be fired up because of that. I think they'd be fired up regardless. Up until that game, their only loss was to their in-state rival and Iowa is pretty good. They've shown they can play against great competition. Sometimes games like that (K-State game) jump up on you and surprise you, but I definitely think they are going to come in here and try to redeem themselves."

On the offensive line as a unit:

"We all really like each other and that really pays off. Every player has his own idiosyncrasies and we all play off each other really well and we've just got a great mentality. We are willing to joke with each other and on the field we can really understand each other because we are close."

On having a bye week:

"It's nice. It's relaxing to get a few days off over the weekend. It's always nice to play too and always nice to get out, so it's different, but definitely a nice feeling."

On getting the first four games under his belt:

"These first four games kind of came quick. Everything kind of came quick for me. Back in the spring, I had a bunch of time to develop and learn. But having last week off really helped in taking a deeper look in what more I needed to learn and develop."