An Outside Perspective: Michigan State

Share All sharing options for: An Outside Perspective: Michigan State 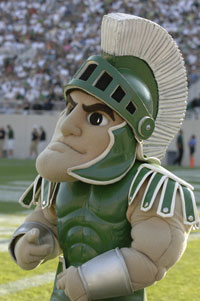 Why an outsiders look? Well, two reasons…first off there is no Michigan State SB Nation blog, so for any MSU fans out there with some extra time, go for it.  Secondly, I won’t pretend to be or declare to be an expert on the college basketball landscape at this point as I have been pretty enamored with football season and at this point have only found time for the Jayhawks in basketball.  With those two disclaimers in mind here’s a run down of my thoughts on the Big 10 and 2008-2009 Michigan State basketball squad and season to date.

Full story after the jump…

First off, the Big 10 is widely believed to be a strong league this year with a significant amount of parity.  That said appears to be on top.  ESPN’s Doug Gottlieb calls it a league full of star coaches that lacks flashy offenses.  Sound familiar, yes that’s right, the same could be said for their football teams as well.  The difference is the Big 10 in basketball this year shouldn’t be considered down.  Much like the Big East, the Big 10 has benefited from parity and a good number of teams could boast strong tourney resumes late in the year. With 9 of 11 teams out of the gates with 10 or more wins we might see a healthy dose of the Big 10/11 in March.  Currently ranking #2 in RPI is another thing in the conferences favor right now proving once again that perception is not always reality.

So what do we know about other than the fact they are coached by tourney time motivator Tom Izzo.  Well, from the 10,000 foot view first and foremost they’re 12-2 with 8 straight wins to date.  Quality wins over a strong Big 12 opponent in and conference contender #19 ranked .  Their only losses to date came against ACC foes Maryland and everybody’s favorite around here the UNC crying Roy Williams’ (low blow; I still have a soft spot for the guy, if only a little).  Roy Williams bashing aside, MSU is a team that for the most part has won where they should and lost where acceptable.  They look to have a strong season in the works, have been anointed the Big 10 favorite and many expect a deep run in March by Coach Izzo and company.

As far as the players the Spartens are led by junior forward Raymar Morgan.  Morgan is averaging 15.2 points and 7 rebounds per game and will likely matchup against the youthful Morris twins against .  Kalin Lucas and Chris Allen are a pair of sophomore guards that average double figures for the Spartans.  Lucas has been on a bit of a hot streak of late scoring 24, 17 and 20 his last three games and will be an important defensive matchup for the Jayhawks.  Don’t sleep on Delvon Roe either.  MSU’s highest rated recruit was pursued by many big names and he’s big, talented and with the youth of this could be an opportunity for him to break out in a big game.

All in all I’m not anticipating great things out of this one.  MSU is a solid team, well coached and the x-factor of playing in doesn’t spell success necessarily for KU.  I’m not saying it can’t happen, but after the road collapse I am simply hoping for a strong performance with a chance at the end.  was a tough road game but will be tougher.  There are a lot of things to do in in the winter but in the fans will be out in force, they will be loud and the students will be rowdy.  Look at it as another chance for Bill Self’s newest crop to grow up and mature.  A win would be HUGE, a loss, if respectable is not unexpected.

I hope I’m not overly pessimistic and hopefully the early look at MSU isn’t totally off base.  More to come obviously as we get into the weekend, standard game preview, game thread and anything else that pops into my head over the next few days.  If any of you all out there have intimate knowledge of the inner workings of Spartan basketball, do share, make me feel better about our chances and most of all help me keep my eye on the prize.