Weekend Visitor the Last Piece to the Puzzle?

Share All sharing options for: Weekend Visitor the Last Piece to the Puzzle? 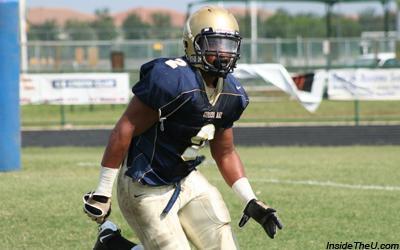 With less than a week remaining before the 2009 fall football class signing day it would appear the Jayhawks are hoping they can pull one more rabbit out of the hat.  Jayhawkslant is reporting that Shane Gordon a linebacker out of Florida will be in town for an official visit this weekend.

More breakdown and video highlights after the jump...

Gordon a 5'11" 225 lb linebacker just recently committed to Dave Wannstadt and Pittsburgh but has said all along that he might take a final trip to check out Kansas.   In rounding out the class it appears this might be the first of what we all hope are many Bill Miller recruits to come to Kansas.  Miller while still at Louisville had built a strong relationship with Gordon and while Gordon never showed a lot of interest in the Cardinals he was tempted enough after Miller's move to KU to take a visit.

Looking at the linebacker class this year and the clear need for depth at that position with this class, Gordon could be a great pickup and final piece.  Julian Jones, Huldan Tharp, Jacoby Thomas and Shane Gordon would be a class with a lot of versatility and each could fill a different role in the future Jayhawk defense.  That said here's a video of Shane for a closer look at how he plays.

At first glance there is a lot to like about this one.  I'm sure many of you will remember Earnest Norman from early in the recruiting season...well there are a lot of similarities with Gordon.  4.5-4.6 speed, attacks the ball and seems capable in pass coverage.  It's always tough to say how things will translate to the college level but I like the idea of adding him to the class for 2009.  If Miller can land Gordon this weekend it would bring Kansas' commitments out of the state of Florida up to three this year.  Not a bad pipeline to start building if you ask me.